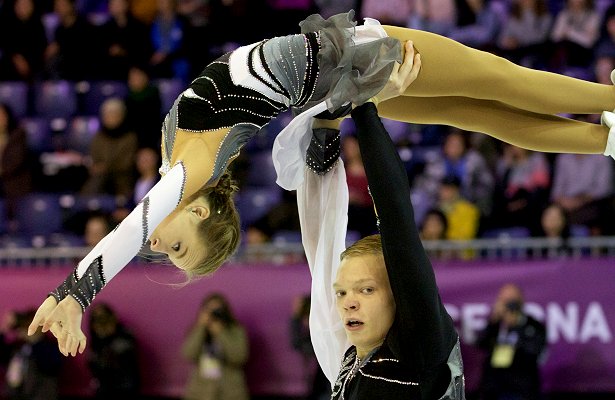 Russia’s Ekaterina Borisova and Dmitry Sopot, who are making their Junior Grand Prix (JGP) debut this season, easily captured the pairs title at the 2015-16 ISU Junior Grand Prix of Final of Figure Skating in Barcelona, Spain, this Saturday.

“We’re thrilled, I have no words,” said Borisova. “We’ve worked a lot and this is the result!”

The team, who is coached by Pavel Sliusarenko and Valentina Tiukova, took bronze at JGP Latvia and gold at JGP Poland earlier this season.

In Barcelona, the skaters from Perm, Russia, delivered a solid short program to Ninija by Maxime Rodriguez which featured a triple twist, side by side double Axels, and throw triple Salchow. Their lift and their pair combination spin merited a level four, and they set a new personal best of 60.29 points with teammates Amina Atakhanova and Ilia Spiridonov trailing close behind.

“This is exactly what we hoped for and what we aimed for,” said Sopot, 17. “Katia has had some problems with her jumps, but this was the best skate we have had.”

The team also gave a strong performance to music from the Lawrence of Arabia soundtrack for their free skate, earning another personal best of 111.57 points.

The routine featured the only level three triple twist, a throw triple loop and Salchow, and level-four lifts and spins. The only error came when Sopot put his hand down on the side by side double Axels. Nevertheless, the pairs team accumulated 171.86 to set a third personal best and won the title overall with over nine points to spare.

“Now we’ll just have to add a triple jump or even two,” Borisova commented. “I also see that we didn’t get a level four for everything, so we can improve on that.”

The 16-year-old also felt that their performance rated a “four out of five” and that they could still improve.

“I think we did about 90 percent of what we can do, so we are happy with the result and with our placement and performance,” she added. “We probably did not expect so much from our first international competitive season.”

In fact, they really didn’t know what to expect, but they felt they had worked well in practice and that the results showed it.

The skaters also have a good relationship with their teammates.

“Although we are competitors on the ice, we are very good friends,” said Borisova. “Especially Amina (Atakhanova) and me. It is not like we are enemies and not talking to each other…we get on well.”

The young skaters enjoyed watching the senior pairs competition and were especially impressed with the quad throws and twists.

“I watched and thought, ‘Wow! How do you do that?'” said Borisova. “To be honest, I am scared to do a quad throw.”