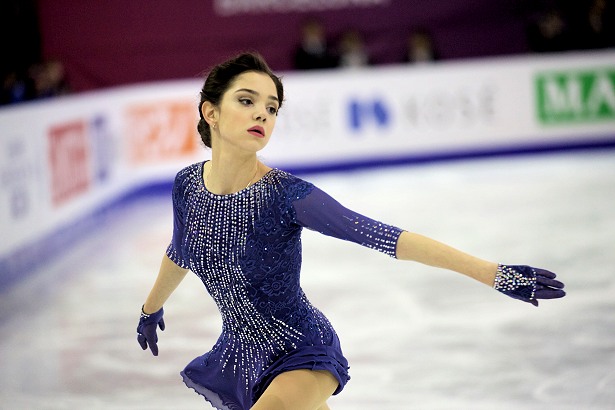 Russia’s Evgenia Medvedeva has been gliding easily from one medal to the next in her international debut as a senior and has set herself up as the top contender for the upcoming 2016 European Figure Skating Championships.

Earlier this fall, the 2015 World Junior champion won 2015 Skate America, took silver at 2015 Rostelecom Cup and struck gold at the 2015-16 ISU Grand Prix of Figure Skating Final. This past week, the 16-year-old followed up by easily winning her first national title in Ekaterinburg, Russia.

At nationals, Medvedeva was absolutely flawless in her short and free program, reeling off solid triple-triple combinations, beautiful spins and footwork. She landed a total of ten triple jumps – three in the short to “Melodies of the White Nights” by Isaac Schwartz, and seven in her free to the “W.E.” soundtrack by Abel Korzeniowski and “Allegro” by René Aubry. Her total score 234.88 points.

The defending bronze medalist from last year admitted that she could only dream about the success she has had so far this season.

“I can’t tell you how I feel now!” said Medvedeva. “I’m crazily happy because I won the national championship. That’s just great!”

The teen from Moscow was very emotional at the end of her performance in the long program, which is rather unusual for her.

“I am normally not crying out of happiness, but there…you can’t even imagine how happy I am and how much this victory means to me,” she added.

Nationals is the toughest competition for the armada of strong Russian girls as there are only three spots available for the European and World Championships. According to the rules of the Russian Federation, the first and second placed skaters are guaranteed a trip to Europeans, however, the Federation can choose another athlete over whoever places third.

The top eight ladies from nationals are podium material in any event given they skate up to their potential, and Medvedeva, who skated last in the long program, knows this all too well. Her realization was confirmed when she saw the final result on the screen.

“I didn’t know how the other girls had skated,” she said. “Maybe I wouldn’t have noticed if I had any minor glitches, so I waited for the score. Good that everything ended well!”

When the score came up, the 2015 Russian junior champion was unable to contain her excitement and joy, and most likely, relief.

“Of course I felt nervous, because this is a high-level competition,” Medvedeva pointed out, “but I was taught how to deal with that.”

“To keep in shape is routine work day after day,” she said. “The most important thing is to get ready mentally. I took a break of one day after the Grand Prix Final, then I went back on to the ice because I realized that there were only a few days left before Nationals.

Now Medvedeva has set her eyes on her next goal—the 2016 European Figure Skating Championships which will be held the last week of January in Bratislava, Slovakia. Again, the toughest competition should come from her teammates.

“I won’t say anything about the competition, because weak people don’t go into sports,” said the skater. “All competitors have a strong character. I think we’ll work with the coaches (Eteri Tutberidze and Sergei Dudakov) day by day, according to the same pattern. My job is to train, to get ready, to skate clean, because you are your main competitor. To overcome and to win over yourself, this is the hardest and most important task.”