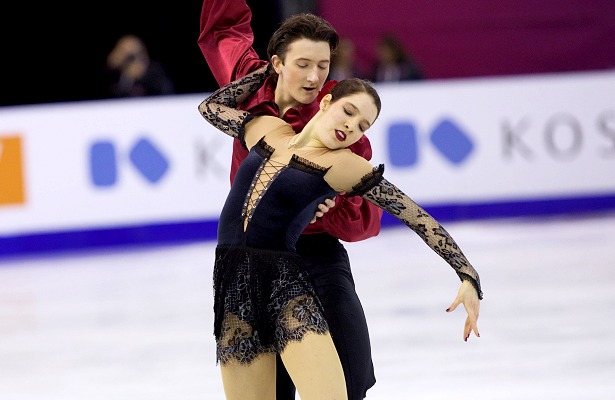 USA’s Lorraine McNamara and Quinn Carpenter won gold at their second appearance at the 2015-16 ISU Junior Grand Prix Final of Figure Skating Championships in Barcelona, Spain, this past Friday. The team had a great time in Barcelona and felt both of their dances were strong and were happy with how their performances went.

The 2015 World Junior silver medalists put out a solid short dance to music from Grieg’s Peer Gynt suite, earning a level four on their twizzles, rotational lift and the second Starlight Waltz pattern. They scored which met all three key points. The placed first in that segment, scoring 65.90 points with teammates Rachel Parsons and Michael Parsons trailing behind by less than a point.

“Our performance was strong, solid and powerful,” McNamara said. “Most importantly, we really enjoyed it. We wanted something that stood out and was not the old one, two, three, one, two, three. It’s powerful music and gives us energy.”

Her partner particularly enjoyed the midline step sequence the most.

“You can go all the way with the character and dance,” the 19-year-old explained.

“Everybody spends a lot of time training for this and now we have made it here,” he added, when asked how this competition sets up the rest of the season. “It’s a good dry run for Junior Worlds. You don’t have the pressure of qualifying. You just want to be the best you can.”

The current U.S. junior champions really separated themselves from the rest of the ice dancers after their performance to Carmen, in which they scored 92.36 points.

While many feel that this piece of music is heavily used in figure skating as a whole, McNamara and Carpenter took inspiration from previous skaters who had performed it so that they could show how the music makes them feel and how it resonates with them as a team.

They also divulged that they have had their eyes on it for a while, but knew it was a very strong piece of music—that it would need a lot of maturity to skate to. As such, they decided to save it until they felt the piece could do justice for their skating.

“All teams that have skated to Carmen have shown really strong performances and for us as a young team, it is really necessary for us to watch and learn from them,” Carpenter later explained. “We don’t want to show exactly the same thing, but I think our cuts are different to the others and we can show our own personality.”

The routine was highlighted by a level four spin, twizzles, straight line lift, and rotational lift, all of which garnered positive grades of execution (GOE). Their diagonal and circular step sequence were graded a level three, but were also very solid.

McNamara clarified that the choice of Spanish-themed music had nothing to do with skating in Barcelona.

“We knew Carmen was powerful and had a strong character,” said the 16-year-old. “It was important for us to express that, so that is why it was a good choice for us.”

“After last season didn’t go great at the beginning, we learned to focus on where we are in the present,” added Carpenter. “Not in a year or a year and a half in the future, and that is more productive. We are very excited we got to show the program here in Barcelona.”

With 158.26 points, the team from Rockville, Md., won the title with just over seven points to spare.

McNamara and Carpenter, who are coached by Alexei Kiliakov, Elena Novak, and Dmitri Ilin, did not earn a season’s best at this event, and felt that it was difficult to compare the Final to the earlier Junior Grand Prix events they won in the U.S. and Poland earlier this season.

“Lorraine and I have had a long time since our Junior Grand Prix (events),” said Carpenter. “We went back to the drawing-board to look at all the different angles we wanted to work on and worked on the technical.”

He further explained that when they have more competitions closer together, they vary and the judging panels are different compared to the Final.

“The scores were not quite as good as our last Junior Grand Prix and the performance came out a bit different, but I don’t think we can attribute that to the program in general or to the general curve of each team’s progress,” he added.

“Both the short and free dance have a lot more to get done in terms of more character work and expressing the story,” said coach Novak. “It’s never enough for that kind of music. The music choices this year is a great assist for the kids on there journey of becoming or moving towards there senior careers at some point.”

McNamara and Carpenter are now looking forward to competing at the upcoming 2016 U.S. Figure Skating Championships which will be held next month in St. Paul, Minn.