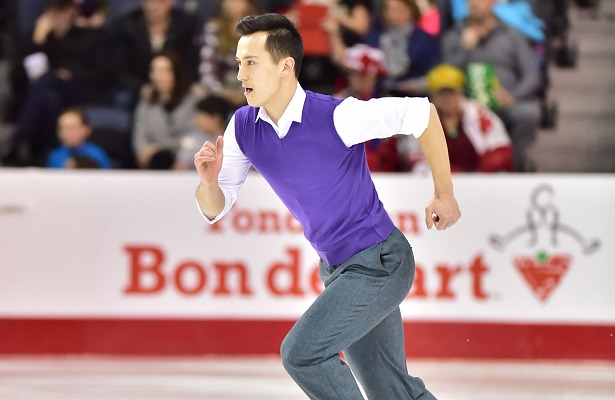 “This program has been a mix of frustration and also great satisfaction,” said the 25-year-old. “Been able to do it great in practice at home in training and just trying to translate that into competition is always the challenge. This is one step forward in the right direction finally. The rest now is just cruising. This was my only really stressful point of nationals.”

“As I do this more successfully more often, I can start enjoying those little in between parts that David (Wilson, choreographer) and Kathy (Johnson, coach) work on all the time,” he continued. “It’s a lot of fun when I can skate that way. It’s such a blast!”

Particularly satisfying was that the performance followed a shaky warm up.

“It wasn’t a great six-minute warm up,” said Chan. “I stepped out on the toe and put my hand down on the Axel, which in an ideal world, you don’t want to do before your short program. But I knew I wanted to stay calm and stay poised and stay relaxed and that’s what the six-minute warm up is for.”

Chan was also sporting a costume change: a bright purple sweater vest in place of the mauve V-neck sweater he used earlier in the season. The costume switch was his coach’s decision.

“The other sweater was too bulky,” explained Johnson. “It didn’t show Patrick’s body and it made him look like a block and we weren’t able to see the line of a lot of the movements. I thought it was thick and heavy and I wanted more of a sexy, understated swag feel, so we decided on the vest. I think it works better.”

The men’s event was intended to be a match up between Chan and the reigning national champion, Nam Nguyen of Toronto, who snatched the title in Chan’s absence and then placed fifth at the 2015 World Figure Skating Championships. However, the pressure of being defending champion weighed on Nguyen and the 17-year-old fell on his opening quadruple toe combination and placed fifth with a score of 76.04.

“In the past weeks I felt a little bit of pressure going into this competition,” he admitted. “Partially because people were seeing me as the reigning Canadian champion and I was defending my title and that’s something I usually don’t think about. But because there’s people talking about it, it kind of got into my head and I just need to practice ignoring what other people say and not letting it get into my mind.”

Nguyen credits the distraction for his blunder on the quadruple in the program performed to “Sinner Man.”

“I was a little bit cautious and tentative going into my toe, but after that I started to fight and I was thinking more to myself that I needed to push harder for the rest of the program and that’s what I did,” he said. “I am kind of happy with how well I pushed after the quad, but overall, I am not happy with my performance.”

In second place, Liam Firus also struggled on his jumps with botched landings throughout, however he managed the best component scores next to Chan for a total score of 78.87.

“The triple Axel is a tough jump for me,” he said, reflecting on the program. “It’s one of those jumps that…the whole year I am nervous about and I have just had to make due with that. But my quad, that jump has been solid this whole year. I got here and you know, I mean granted it’s pretty typical to get tight in competition, I just think I got tight here and really wanted to come here and nail it in my program.”

Apart from the error, Firus was pleased with his outing set to the music “Blues for Klook.”

“I performed that program almost as well as I could,” said the 23-year-old. “My spins have improved a lot over the course of the year, which was one goal of mine. Overall I am happy with it. There is definitely room for improvement and I am hoping to make it further in that season and do that at the Four Continents and World Championships.”

Nerves were creeping into his mind all day.

“I really wanted to show people how much I have improved this year,” said Firus, “and this program is a totally different thing for me. It’s kind of gritty, loose and raunchy and I wanted to show how good it can be. I don’t cry much and I could just feel like my eyeballs were filling up with tears. I wasn’t sad, I wasn’t super happy, it was just overwhelming how nervous I was. When my music started, I was just like ‘Get into the music!'”

In third place, Kevin Reynolds scored 77.65. In his lively routine to “Tank” by Yoko Kanno, the British Columbia skater narrowly landed a quadruple Salchow-triple toe loop and triple flip, but fell on the triple Axel.

Keegan Messing is in fourth place with 77.20.