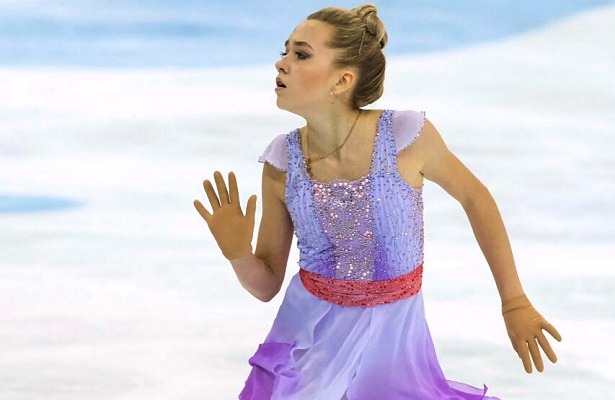 Russia’s Elena Radionova has been a consistent podium contender in figure skating ever since she started competing internationally in the fall of 2012. In fact, the only international competition in which she did not win a medal was her first ISU Grand Prix Final in the 2013-14 season where she came fourth.

Unlike many other girls that struggle during puberty in skating, the Muscovite is able to keep stay true to form, although not always as perfectly as she would like. Radionova, who just turned 17 on January 6, fought through some illness and injuries this season, but took bronze and gold in her two Grand Prix events, as well as the bronze at the Grand Prix Final. She also claimed silver at the 2016 Russian National Championships in December.

Russian Nationals as always been one of the toughest competitions of the season in the deep field of ladies, and the reigning World bronze medalist not only had to face strong competitors, but was also contending with a cold.

“Nationals are the battle of nerves of steel,” Radionova said. “Whoever has stronger nerves will be on top. All our girls have the same jumps and it is just the question of who is able to do everything. I knew that I had to skate clean, and I can say that Nationals was my best competition this season so far.”

The skater felt she performed in Yekaterinburg with more confidence and consistency than in other events thus far this season.

“I did my job a 100 percent,” said the new Russian silver medalist.

Radionova feels that she always has been mentally strong, however, acknowledges that she doesn’t always have “nerves of steel.” Nevertheless, she felt the competition at nationals pushed her. On the other hand, she has proven more than once that she is an excellent competitor. For example, when the triple Lutz in the short program is somewhat shaky and she opts not to go for the combination with a triple toe, she has no problem adding the triple toe to the triple loop later in the program.

However, the 2015 European silver medalist admitted that success doesn’t come always easy for her. At the Grand Prix Final, she said that she had grown about seven centimeters since the past season and felt in Barcelona that her free skating dress was becoming tight.

“When I returned from Barcelona, I realized that I had grown again,” Radionova shared. “I’m always comparing my height to my mother’s. When I stood next to her, I was one centimeter taller than she is. I would like to be about 1 meter 60 or 1 meter 70. This would be the ideal height, I think, but I’m growing to so quickly.”

So for the upcoming 2016 European Figure Skating Championships, Radionova will probably have to change her free skating dress.

“It is made from material that doesn’t stretch and even breathing in it has become a bit difficult,” she revealed. “It is good that the short program costume stretches.”

No matter. The skater, who is coached by Inna Goncharenko, is determined to deal with her growth spurt with grace.

“I’m always saying that there is no limit to perfection,” said Radionova. “You have to work hard and overcome yourself to get through all difficulties. This awkward age is not an easy time, but you can get through it. The most important thing is to keep your focus. When you have a goal, the will, and people that can help you, everything will be fine.”

The two-time World Junior Champion actually believes that growing older and eventually maturing is an advantage and she remains optimistic.

“When you’re smaller it is easier to do things, but I can see more pluses that come with age than minuses,” Radionova pointed out. “I just need to get used to my body.”

The two-time Grand Prix Final medalist is not only a technically strong skater who masters various triple-triple combinations, but is also a strong performer who always puts a lot of emotions into her skating. Her programs to “Je t’aime” (short program) and music from the Titanic (long) are right up her alley.

“They are actually very different from each other,” Radionova explained. “In the short program I’m just like a young rose, it is a beautiful love story. The long program is a tragic love story; love can be very different, therefore, I have programs with different characters.”

The teenager gets really involved in her performances and often has tears in her eyes at the end as she is overwhelmed with emotions.

“I’m just a very emotional person and what I’m showing on the ice always comes from my soul,” Radionova shared. “These emotions are not pretended. I know how some other skaters learn where to smile and where to cock the eye, but I’m skating my programs like I feel them.”

The 2015-16 Grand Prix Final bronze medalist is now preparing for the European Championships later this month in Bratislava, Slovakia, where she aims to be at the top of the podium after taking silver a year ago. Her toughest competition will come from her teammates—Grand Prix Final champion Evgenia Medvedeva and defending European bronze medalist Anna Pogorilaya.