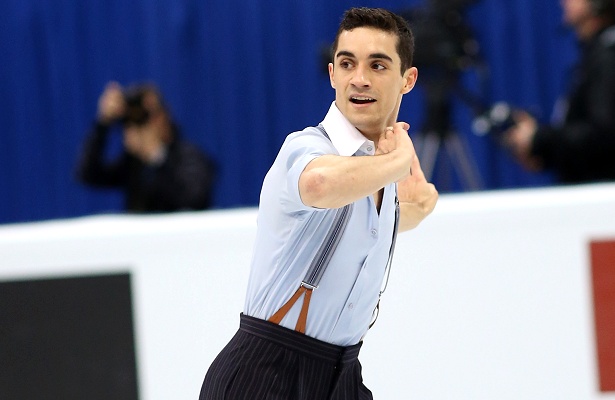 Fernández touched down with his hand on his opening quadruple toeloop, but then nailed a beautiful quadruple Salchow-triple toeloop combination, triple Axel-double toe and another quad Salchow. He only crashed on the second triple Axel.

The Spaniard sold his playful “Guys and Dolls” program well to the judges and audience, and picked up five perfect 10.0s for performance, choreography and interpretation. The now four-time European Champion earned 200.23 points and racked up 307.77 points total, becoming the second skater in history since Japan’s Yuzuru Hanyu to crack the 300-point barrier.

“It doesn’t matter how many times you win something, if it is the first time or second time, it is always special,” he said. “It is so important to keep making history in my home and in figure skating.”

The 24-year-old did not want the day to end and added that there was still work to do on the free skate.

“We added the second triple Axel to the program and I thought it was really slow in the program, so I have to go back to training to make it more confident so I don’t make these mistakes in the next competition [at] Worlds,” he added.

Bychenko turned in a solid program to “Les Miserables,” hitting a quadruple-single toeloop, a triple Axel, as well as six more triple jumps, but he went down on his second quad toe. Although he ranked fourth in the free as he did in the short, he was able to claim silver with 242.56 points.

“I don’t know what to say about coming second, I’m beyond excited,” said the Ukrainian-born skater. I secretly hoped I would be on the podium, but I didn’t think I could get second place. It feels nice to make history.”

“The performance could have been better,” the 27-year-iold added, “but it also could have been worse. I made a big mistake with a fall on second quad. I still have to work on some things, but in general it was good.”

Kovtun skated next to last, which may have led to too much pressure for the Muscovite. He stepped out of the opening quad Salchow and then crashed badly on the quad toe. The Russian champion then popped the next jump, a planned quad Salchow, however, he was able to recover in the second half of the program to land a triple Axel-triple toe and three more triples. He slipped from second to third at 242.21 points.

“I am so sad after my free skate because before this competition,” said the 20-year-old. “I was working a lot on my practice. I remember doing a lot of clean programs in my practices. I don’t know what is wrong, but I remember that I felt so nervous before the free skate, before the short I felt better. I know exactly one thing: I have to work a lot and do more in practices and I have to skate more full programs for my confidence.”

Florent Amodio delivered one of the most memorable moments of the competition and probably the Championship. The Frenchman had announced that he will retire from competition after Europeans and he just wanted to finish his career on a high note. He did exactly that, turning in a nearly perfect performance to “Memories of Sobral” that featured a quadruple Salchow and two triple Axels (240.96 points).

At the end of his program, Amodio knelt down on the ice while the crowd was on their feet and cheered loudly. Coach Nikolai Morozov broke down in tears.

“After every jump I was thinking ‘I did it! I did it!’ but I had to keep my focus,” he summed up. “I have had lots of medals and lots of bad moments, so to finish like this… I can’t believe it. This is how I want to be remembered.”

Russia’s Mikhail Kolyada, 20, pulled up from ninth to fifth in his debut at the European championships with a strong performance (236.58 points). Ivan Righini of Italy finished sixth, his best result so far, with 236.36 points.

Michal Březina of the Czech Republic dropped from third to tenth after an error-ridden program.