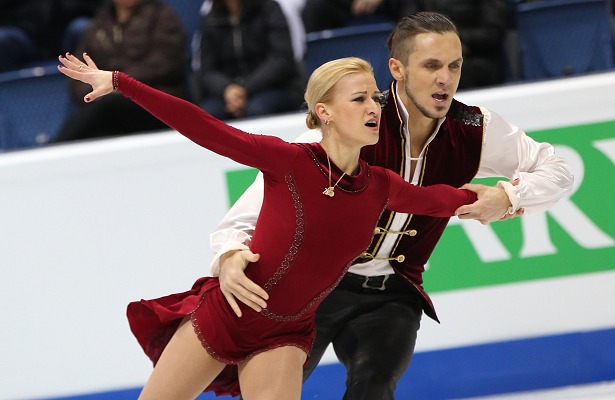 Tatiana Volosozhar and Maxim Trankov of Russia took their fourth European title since 2012 on Saturday in Bratislava. Germany’s Aljona Savchenko and Bruno Massot claimed the silver medal in their debut as a team at the event, while Russians Evgenia Tarasova and Vladimir Morozov repeated as bronze medalists.

Volosozhar and Trankov turned in a dramatic performance to music from Bram Stoker’s Dracula and Van Helsing in which they nailed a huge triple twist, triple Salchow-double toeloop combination, throw triple flip and loop. However, Trankov stumbled on the landing of the side by side triple toe. The reigning Olympic Champions posted a season’s best of 142.89 points for a total of 222.66 points.

Despite the win, Trankov was annoyed with the pairs schedule.

“It was a very hard start to the day,” said Trankov. “We had an early practice then we stayed here in the rink before the free program because we had no time to go to the hotel. The schedule is crazy. I don’t know why since 2014 the organizers have made the schedule so crazy for pairs when we have these hard elements. All pairs skaters are very unhappy about this. The European Championships is the most horrible competition for pair skaters.”

Several pairs made errors on the lifts and Trankov felt that this was due to the training and competition schedule for the pairs. Looking forward, the 32-year-old pointed out that what they did in Bratislava won’t be enough to win in Boston.

“Today will not be enough because we have the Chinese and Canadians at Worlds,” he said. “We know what we need to do for Europeans. We are going for victory at this competition, but when we go to fight with Ksiusha (Ksenia Stolbova) and Fedia (Fedor Klimov) and with the Canadians and Chinese couples, it is quite different and we have to have more difficult combinations and we cannot lose levels on the lifts and the spins like this morning. We must have everything at level 4 and skate a clean program.”

Savchenko and Massot opened their routine to “Sometimes” by Wax Tailor with their impressive triple twist and followed up with a side by side triple Salchow, throw triple flip and Salchow. However, Massot aborted the reverse lasso lift and also struggled with the hand-to-hip lift. Both lifts had no value. Massot, who turned 27 on Thursday, also doubled the first toe in the planned triple toe-triple toe sequence. The German Champions scored 125.24 points for their long program and finished n second at 200.78.

“I’m really happy with the silver medal in our first Europeans together,” said Savchenko. “Of course I’m unhappy because of the mistake on the lift. We never miss that lift, especially as Bruno is really strong. Now we need to go and think about what we need to change in our practices so it doesn’t happen again.”

“I’m upset about my mistakes,” added Massot. “I usually never miss a jump or a lift, but I’m very happy with our result and with the silver medal.”

Skating to “Nocturne” by Frederic Chopin, Tarasova and Morozov completed a high triple twist (no surprise, they have been doing a quad already), triple Salchow, level-four lifts and a throw triple Salchow. However, the routine was not flawless: Tarasova doubled a toeloop and stumbled on the throw triple loop. The 2014 World Junior silver medalists picked up 127.38 points for the free and had 197.55 points overall.

“To be honest, we expected more from ourselves,” said Morozov. “We made some mistakes. I blame it, first of all, to a very awkward schedule. Pairs had never started so early in the morning. We had our practice today at 8.40, so we woke up at 6.30. I felt almost as if I was in space.”

Overall, the team was pleased with their result and the progress they’ve made.

“I think we have taken a big step since last year,” said Morozov. “The place is the same, it’s a bronze, but I think it is a more difficult competition this year. There are more difficult (stronger) teams in the competition with us today and we looked good.”

Vanessa James and Morgan Cipres of France pulled up from fifth to fourth with a solid performance. They tried the quadruple throw Salchow for the first time in competition, but James stepped out of the landing. The French accumulated 185.55 points. They had missed the death spiral in the short program.

Italy’s Valentina Marchei and Ondrej Hotarek recovered from a fall on the throw triple Lutz in the short program with a stronger performance in the free to move up from eighth to fifth (182.61 points). Nicole Della Monica and Matteo Guarise (ITA) remained in sixth place (178.97 points).