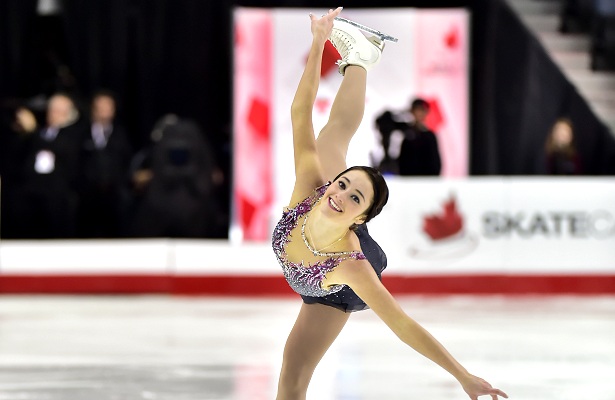 In her return to the 2016 Canadian National Figure Skating Championships, two-time champ Kaetlyn Osmond resumed her place atop the rankings after the Ladies’ short program in her comeback season.

In her equal-parts-sensual-and-sweet performance to “La Vie en Rose,,” which was choreographed by Lance Vipond, Osmond racked up 70.63 points. Apart from a triple-triple turned triple-double, the Newfoundlander skated the program as planned and brought many of the spectators at Halifax’s Scotia Centre to their feet for a standing ovation.

“My program felt like myself again and that’s what I wanted to be able to do is feel like myself again,” said the 20-year-old skater who trains in Edmonton, Alberta. “That’s the most comfortable I felt on the ice since I got back and I love it.”

“I got up in my knees and that’s something I know I can’t do going into a jump and that’s exactly what I did going into the flip,” Osmond said of triple flip-double toe.

However, she exercised the mindfulness to move on from the doubled jump which opened the program. While there was an edge call on her triple Lutz, the Osmond still earned many grades of execution (GOE) for her elements.

“At other competitions, I was always rushing and today I made a mistake on the flip toe and I said ‘Whatever, it’s the first jump and I have a lot of other things in the program’ and I made everything else worth it.”

In a departure from her usual dynamic and flirtatious short programs, this season’s slow music approach gives Osmond additional motivation to control the nerves that she said intermittently surfaced during the day.

“If you have any bit of nerves you’ll be able to see it because the long lines shake and they’re harder to do if you have nerves.” Her jump landings showed nary a waver.

Jubilant in second with a score of 68.81 thanks to her flawless outing, was Alaine Chartrand of Ontario.

“I was happy to repeat what I did in Russia pretty much,” she said, referring to her similarly clean skate at the Rostelcom Cup in November. The program, set to “Lilies of the Valley” from Pina, opened with a steady triple Lutz-triple toe and featured a solid triple loop and double Axel.

She credits the performance to a new training priority. “We’ve been focussing on being calm and patient,” the 18-year-old said of the multiple coaches she trains with under the direction of head coach Michelle Leigh at five different sites across Ontario.

Gabrielle Daleman skated last in the final flight of ladies and early in the performance, last year’s champion appeared set to score close to the leaders with a triple toe-triple toe that covered impressive distance across the ice. However, as the 18-year-old landed the triple Lutz out of footwork in her program to “You’ll Have to Swing It Mr. Paganini,” she tripped and fell.

“I am happy I kept going,” she said despondently of the error which put her in third place with a score of 64.44. “I kept my head up high and I didn’t give up. It felt good going in. It’s just sport, I can’t always be perfect. I’m going to put today behind me and come out tomorrow as a new day for the long.”

With two spots on the world championship team, Daleman’s falter and the four-point gap between her and Chartrand may have unfortunate consequences to her hopes of a ticket to Boston.

Véronik Mallet of Quebec sits in fourth with (60.01) and Larkyn Austman of British Columbia is fifth (53.87).