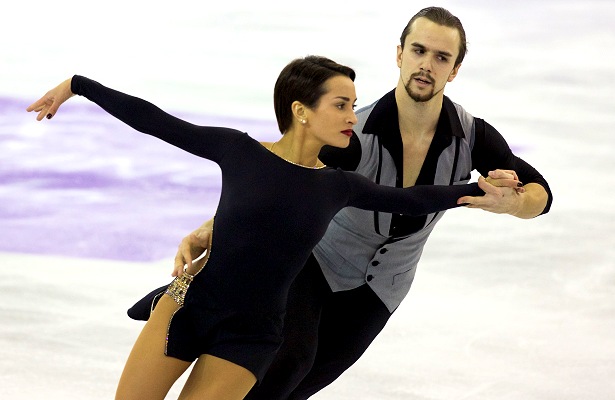 When Russia’s Ksenia Stolbova and Fedor Klimov had a rough start into the season finishing fourth at Skate America with sub-par performances, quite a few people wrote them off—especially given they had a few post-Olympic season ups and downs as well.

The team rebounded at their second Grand Prix in Moscow, Russia, where they defended their Rostelecom Cup title and earned the fourth of seven spots at the 2015-16 ISU Grand Prix Final in Barcelona, Spain, thus proving that they are back on track and even better than ever before.

The Olympic silver medalists won the Grand Prix Final with two clean skates with nearly 13 points to spare ahead of reigning World Champions Meagan Duhamel and Eric Radford of Canada.

“This result is a turning point for us,” said 25-year-old Klimov. “Finally we were able to skate our long program clean without any mistakes. It took us long to get there and we’re very happy that we were able to do it in competition.”

In Barcelona, five out of the seven teams went for the quad throws and three landed at least one successfully. This has not escaped Stolbova and Klimov’s attention, although they didn’t need a quad to win this time.

“Our victory proves that you can compete (against) quadruple elements with quality skating and strong jumps,” Klimov pointed out. “However, we think that figure skating is moving forward and we’ll nevertheless have to learn these (quad) throws and maybe some other highly difficult elements.”

Stolbova is not in a rush and doesn’t want to put too much emphasis on the quad throws at this time.

“We did a clean triple-triple-double combo in the free program, isn’t that difficult enough?” the 23-year-old rhetorically asked. “Who else is doing that?”

The skater from Saint Petersburg, Russia, added that they had also revamped their lifts in both programs.

“We have changed not only our style, but also the technical part,” she said. “We’ve made the lifts stronger and we changed the entries and the layout of the elements. We’ve done a good job and a big job. Already at the Grand Prix in Moscow we looked different than in earlier competitions of the season. We’ve progressed since Moscow, as we said we would.”

Nevertheless, the two-time European silver medalists have been working on a throw quad Salchow.

“Everything has its time,” Stolbova noted. “We hope to show it by the end of the season.”

Last year, Stolbova and Klimov ended their season early after taking the silver at Europeans, opting not to go to worlds in order to have more time to prepare for the current season. They also used their time to go for different, more modern types of programs with “I Put a Spell on You” for the short and “The Unknown Known” by Danny Elfman for the long.

The team has entitled the long program “Man and Shadow” and the music was Stolbova’s idea.

“We knew what we were doing,” she explained. “We changed everything this season, down to costumes and hair color, but more importantly, we’ve grown up. I think that this season all pairs feel that they have to stand out, to change, and everybody is searching for their way to do this and for something special.”

The changes and the new programs, choreographed by Nikolai Morozov, have been well received by the judges and the audience.

However, Stolbova and Klimov recently suffered a small setback when they had to withdraw from Russian Nationals at the end of December, preventing them from going for a third consecutive title. Prior to the event, Klimov had back problems and was advised to rest for about two weeks.

The team hopes to be back in top shape in time for the 2016 European Figure Skating Championships later this month in Bratislava, Slovakia, however, competition will be tough. Their competitors include defending champions and teammates Yuko Kavaguti and Alexander Smirnov, who have two quad throws, and Olympic champions Tatiana Volosozhar and Maxim Trankov, who are back in the game and just won the National title.

Five-time World champion Aljona Savchenko of Germany will also be back with her new partner Bruno Massot, who have proven themselves competitive during the Challenger Series.