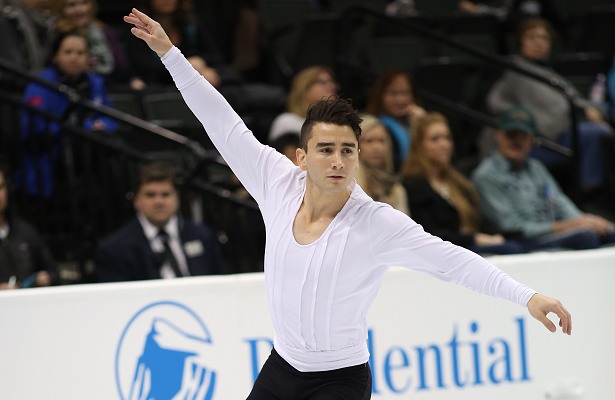 Max Aaron is the current leader after the Men’s Short Program at the 2016 U.S. Figure Skating Championships, which is taking place in Saint Paul, Minn.  Ross Miner is currently in second place, followed by Adam Rippon. With 2015 U.S. champion Jason Brown and 2015 U.S. bronze medalist Josh Farris out due to injury, the door is wide open.

It was Aaron’s night at the Xcel Energy Center. The skater who trains in Colorado Springs, Colo., nailed his opening quad Salchow-triple toe in his short program “Nessun Dorma.” The 2015 Skate America champ also threw down a triple Axel, triple Lutz, and three level four spins to earn 91.83 points.

“Today went pretty well,” said the 23-year-old. “I fought through the whole thing. Nothing was really easy. It’s part of my process this year, working through the kinks and keep going for it and not to doubt myself. I threw down the best program I can today.”

The skater, who is coached by Tom Zakrajsek, has no plan of attack going into the free skate except to keep doing what he’s always done and work on building up his mindset.

“I’m ready for it and I want to deliver a clean performance,” said Aaron. “In this long I have yet to do that and that’s what I’m coming to do.”

While Miner didn’t have a quad, he impressed with a solid triple flip, triple Axel, and triple Lutz-triple toe—all of which earned positive grades of execution (GOE) from all the judges. The Rostelecom Cup bronze medalist was also awarded a level four on every element, scoring a total of 90.90 points in his routine to “New York State of Mind” by Billy Joel.

“It was really fun,” said the 24-year-old who trains in Boston, Mass. “I think I did a good job staying patient and being tough. My Lutz takeoff wasn’t great, but I got a good toe done, so that was a good result. I had a lot of fun out there.”

Rippon struggled with his opening triple Lutz-triple toe landing, but rebounded with a solid triple Axel and triple flip. The 2015 U.S. silver medalist also earned level fours on two of his spins and footwork, scoring 88.01 points.

“Today wasn’t my best,” admitted the 26-year-old, “but I am really well-trained. After my first jump I told myself I felt a little off on my Lutz. I will stop the program, go to the top of the Xcel Center, and just Titanic myself off the building if I don’t rotate this next toe.”

Obviously the Kate Winslet maneuver wasn’t necessary, and he just let his training take over from there.

“I got a little ahead of myself,” said Rippon, who is coached by Rafael Arutyunyan, “but I put myself right where I want to be heading into the free program—within three to four points of the lead.”

Nathan Chen landed a quad toe-triple toe, but struggled on the opening quad Salchow and a triple Axel later in the program. He scored 86.33 points and is in fourth place followed by Timothy Dolensky (80.01).