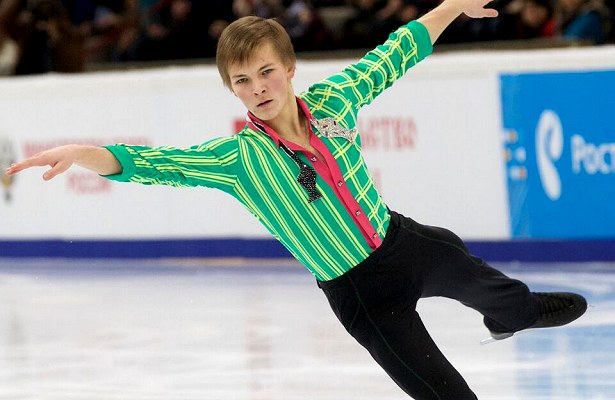 Russia’s new kid on the block, Mikhail Kolyada, might change all the talk and attention the Russian ladies in figure skating have been getting over the past few years. In 2013, the figure skater won the junior national title and went on to place sixth at Junior Worlds—his only major competition until this fall.

During the 2013–14 season, Kolyada won silver and bronze medals on the Junior Grand Prix series, and became the first alternate of the JGP Final. At 2014 Russian Nationals, he was sixth after the short program and then withdrew from the long program due to boot problems.

In August 2014, the skater broke his right ankle, which required two surgeries, and was off the ice for five months. However, this fall he came back strong to win a gold and a bronze medal in the two Challenger Series events before placing fifth in his first Grand Prix event at Rostelecom Cup.

The 2013 Russian Junior champion went on to claim the silver medal at Russian Nationals last month, which guaranteed him a ticket to the upcoming 2016 ISU European Figure Skating Championships in Bratislava, Slovakia.

“I felt so happy and excited, because I won my first medal at the Russian Championships (senior level) and got on the team for Europeans,” Kolyada shared. “It was always my dream to compete in this event and now my dream has come true.”

“To be honest, it hasn’t yet completely sunk in that I really qualified,” he added. “After nationals, everybody sent messages and congratulated me, but I felt like this is not happening to me.”

This season, Kolyada is using “Nightingale Tango” and “John Gray” (a foxtrot by Matvey Blanter) for his short program, while his long is to music from Danny Elfman’s The Nightmare Before Christmas soundtrack. The skater, who has high jumps and good skating skills, is working hard on combining the two with choreographer Olga Kliushnichenko.

“This is what makes figure skating special,” he said. “Our sport is universal, so you need the off-ice preparation, the choreography, and then you go out on to the ice and try to combine everything. I’ve been working with Olga for seven years now and I enjoy choreography and take part too. It takes longer that way, but I enjoy it and she is happy too.”

For Kolyada, his programs are a “dramatic identification” in which he feels like an actor on stage, however, his jumps are amazing as well.

“My coach Valentina Mikhailovna (Chebotareva) has taught me since childhood and has always tried to achieve the same correct technical execution of the jumps,” said the Russian silver medalist who enjoys jumping best. “As for the height of my jumps, this is probably just by nature.”

Kolyada, whose mother put him into skating to keep him healthy, trains at the Figure Skating Academy in St. Petersburg. After breaking his ankle, he was more determined than ever to come back, but didn’t expect the breakthrough he had this season.

“I worked hard and I did everything possible to come back, but to get that high (at nationals) … I didn’t expect that,” said the 20-year-old. “I thought I could make the top five. Maybe something in my subconscious changed that gave me extra strength and motivation.”

While recovering, Kolyada took the time to continue his studies at the Lesgaft Institute of Physiculture in St. Petersburg.

“I tried to distract myself and to have a rest mentally,” he explained. “When the doctors allowed me to resume practice, I returned with renewed energy.”

As the oldest of four children in his family, Kolyada is used to responsibility. When he still lived at home, he helped take care of his younger siblings.

“I can change diapers, clean up, wash and cook,” he revealed. “I can cook everything except baking cakes.”

The skater now lives in the city closer to the training facilities. His little sister started skating, but it was too much trouble for his working parents to take her to practice, so she has put it on hold for now.

Kolyada, who enjoys playing table tennis in his spare time, now prepares for his debut at the 2016 European Championships and hopes to upgrade his technical content.

“In the free skating at Europeans I’ll try two quads—the toeloop and Salchow,” he shared. “I did that already in practice. I just need to change the layout of my program a bit because of the jumps to make it more comfortable. The short program will be unchanged.”

The 2015 Ondrej Nepela Trophy silver medalist has already proven that he is able to keep his nerves under control, and will try to do so again in Bratislava at the end of the month.

“I’ll try to zone out and treat the competition just like a normal run-through,” he said.

Europeans could very well be the next big step for this talented skater.

“I have goals,” he said. “I set a goal for myself that I need to achieve. If I manage to do that until the evening, great, the day was successful and I can set a new goal for the next day. This is how I try to move forward little by little.”