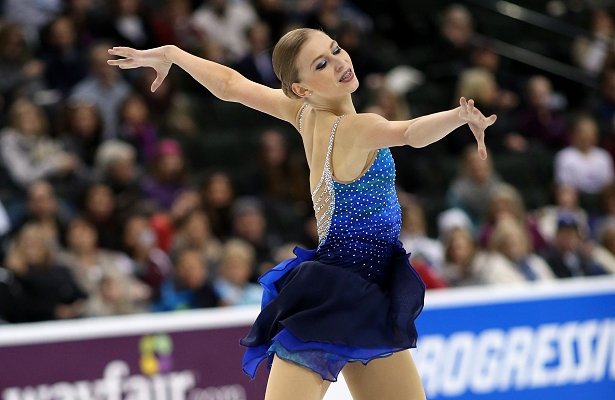 Polina Edmunds is the current leader after the ladies’ short program at the 2016 U.S. Figure Skating Championships, which is taking place in Saint Paul, Minn. Gracie Gold currently sits in second, followed by Tyler Pierce.

Looking calm and composed, Edmunds put out a stunning program to “Moonlight Sonata,” which featured a solid triple Lutz-triple toe, triple flip, and double Axel. Two of the spins received a level four, as well as her footwork. She finished with 70.19 points with nearly an eight-point lead going into the free skate.

“I just really wanted to feel comfortable on the ice and show the judges how beautiful this program is,” said last year’s 2014 U.S. silver medalist. “Rudy [Galindo] did a great job choreographing this program, and I really just wanted to show the amazing movements that he gave me. I am very happy that I put out a strong program technically and very happy with how the components went.”

In terms of progress on working with jump under-rotations, the skater felt it was easier two years ago than it is now due to growth changes.

“I’ve still felt very strong and able to land my jumps in competition, regardless of everything else,” she said. “For this competition I’ve been working on getting those rotations because I don’t want anything to hold me back in terms of points.”

The 2015 Four Continents champion has confidence in herself and believes that when she steps onto the ice that she is able to do what she does in practice.

“I’ve been doing these jumps for six years now, so there really is no excuse not to land [them],” said Edmunds.

Edmunds acknowledges that while there is always pre-competition hype and buzz regarding the “Wagner-Gold” rivalry, she really doesn’t pay much attention to it.

“Of course, I have never had the chance to be in this position before, so I’m really excited and happy that I’m finally here,” said the 17-year-old, who trains under David Glynn and Nina Edmunds in San Jose, Calif. “I know that it comes down to who skates the best on the ice and I’m glad what I put down [in the short] was my best and I was rewarded for it.”

Gold had a rough opening in her short to “El Choclo” when she popped her opening triple Lutz which was meant to be a combo. Nevertheless, she rebounded with a triple flip in which she added a double toe, and showed exquisite level 4 spins and as well as level 4 footwork. She scored 62.50.

“I just wasn’t present or in the moment,” the 20-year-old explained regarding the Lutz. “I was flummoxed. I just don’t do single Lutzes like that. I was so close to the boards, I was shocked and couldn’t put a triple toe in. In practice, I would have registered and done it again. I just wasn’t there. It took a mistake to shock me back in. It was really unfortunate.”

Pierce, who was seventh last year in her senior debut, landed a triple toe-triple toe, double Axel, and triple loop in her routine to “Voices from the Forest.” Two of her spins earned a level four as well as her footwork, and she scored 62.45 points. She trails Gold by just under half a point.

“I’m really happy that I was able to stay with it and kept my concentration throughout the whole combination,” said the 17-year-old who landed the first triple-triple of the event. I tried to focus on the whole package and not just an all-jump program. I’m very happy with how I skated and I was able to keep my concentration throughout the entire program.”

Ashley Wagner underrotated and fell on the back end of a triple flip-triple toe, but was otherwise solid. The defending champion is currently in fourth with 62.14 points.

“Raf [Rafael Arutunian] and I were talking about it and I am not upset with that program at all,” said the 24-year-old. “I think that I executed exactly what he told me to do and that’s kind of my main focus this season—getting the technique that he wants.”

When asked about making up the point deficit in the free skate, Wagner referred to the 2015-16 Grand Prix Final when she rose two spots to fourth after placing third in the long program.