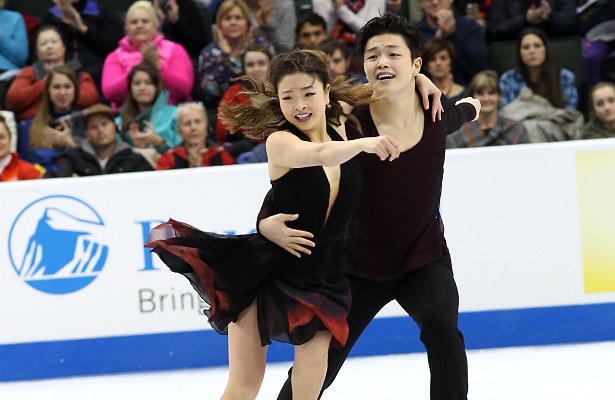 The Shibutanis showed good connection to their music by Coldplay, and while they are a brother-and-sister team, their free dance exuded a natural honesty and fluidity throughout.

The team earned a level four for all elements, including their diagonal and circular steps, along with oodles of +2s and +3s for grades of execution (GOE). Their twizzles brought the audience to their feet, and after a standing ovation at the end of the dance, the five-time senior national medalists earned a score of 115.47 for first place. With a total score of 190.14, they captured the gold with just over three points to spare.

“That was an absolutely incredible moment for Alex and me!” said 21-year-old Maia. “The crowd was fantastic and to become national champions for the first time is incredible. We’ve been on a 12-year journey together and we are really looking forward to the future. I wouldn’t ask for any other partner.”

“We’ve been putting in the work,” said Alex on winning their first national title. “Ice dance has a reputation for having to wait your turn. We’ve put in the work this season and I think that has really been showing across the board. We’ve taken our skating to another level this season and I think that’s reflected in our performances and in our scores.”

“In the periphery, you hear people that doubt your abilities and what our potential was as brother and sister,” the 24-year-old added. “What we have is very special. We have never really doubted what our potential was and I think that is what has gotten us to this point. We are confident that there is so much more we can accomplish on the ice and that’s what we are really looking forward to doing.”

Chock and Bates earned 111.79 points for a second place finish in the free dance with their routine to Rachmaninoff’s “Piano Concerto No. 2.” Though the program is still new, the team seems to be settling into it well and they showed attack and veracity, looking comfortable throughout. They too, earned many positive GOEs and level fours with the exception of their dance spin (level two) and diagonal steps (level three). Their total score was 186.93.

“It felt great out there today, it really did,” said Chock, 23. “This is the best performance we’ve put out all season. We had a little mishap on the spin I guess, we got a little lower [level] than we expected. Other than that, it felt great to skate and we were just enjoying every second of it.”

“We’re really happy with the way we handled this week, coming in as defending champions and handling that new kind of pressure that we’ve been experiencing all season long,” said 26-year-old Bates. “This has been our best competition as far as how we skated and how we performed. We’re going to take this to fuel us and to come back stronger.”

Hubbell (24) and Donohue (25) found themselves in a difficult place to skate after the standing ovation the Shibutanis received, however, they used the energy to their advantage in their dark and dramatic free dance to “Adagio for Tron” by Daft Punk. The edges in their level three footwork have noticeably improved and the team showed exquisite lines and intricate transitions. They finished third in the free dance (107.71) and overall (178.81).

“We feel the most confident we’ve ever felt just in our own skating and how we can control our performance every time, our consistency,” said Hubbell. “That’s a great feeling. I think that we’re in the right place to reach all of our dreams.”

“Today in a way feels the same because we’ve got bronze multiple times now,” she added. “We feel it’s such an extremely difficult event and to go out one after another and have that reaction when we finish, you know they skated their best. The uproar when the Shibutanis won was pretty intense, but we tried to use that energy and skate our best. We’re proud of what we did.”