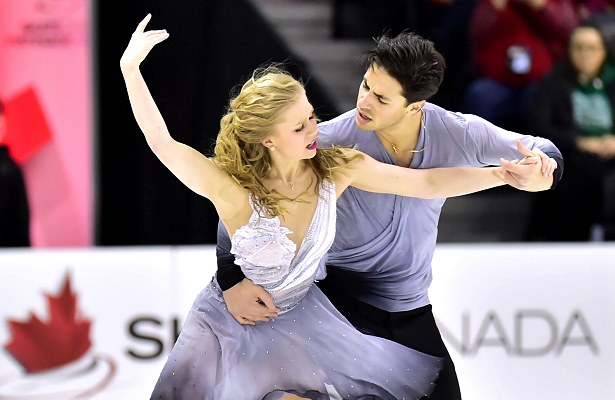 Kaitlin Weaver and Andrew Poje easily defended their title at the 2016 Canadian Figure Skating Championships on Saturday. Piper Gilles and Paul Poirier pocketed their third silver medal, while Elisabeth Paradis and Francois-Xavier Ouellette rose from fourth to claim the bronze.

One would think gold would be sweet heaven after Weaver and Poje’s “Bitter Earth” free dance which featured five level 4 elements and garnered a personal best free dance score of 115.53 (total 191.73). However, not for these perfectionists who felt some misbalances and bumps undiscernible to even the trained eye.

“We weren’t happy with everything but at the same point, we’re pleased that we’re not happy with ourselves,” said Poje. “We want to make sure we’re pushing ourselves because we want to use this as building momentum and building our confidence in the subtle things for later at the World Championships.”

“I finished that program thinking ‘Shoot, that wasn’t as well as I could do,'” Weaver added. “I think Andrew helped keep me together. I just felt a little off in places and we’re hypercritical. That’s our job—to make sure everything’s perfect. I know I can do better, but given that circumstance, we still were able to put out a good performance. There weren’t any major mistakes. It’s important for us to make sure we catch every detail.”

In second with a personal best score of 109.19, Gilles and Poirier captivated the Scotiabank Centre audience with their “Neverland” performance featuring unique lift and spin positions. Their total combined score was 179.82.

“Those things were quite big!” Gilles said of the scores. “That’s the first time we’ve had scores that high, so I think that’s showing that everything we have done is moving in the right direction. I think we’re very confident in this program now. I feel like we are really starting to embrace our different skating style and I think we’re really starting to own it, so we’re very, very happy with that.”

“Through evolving, growing and working together, you can create something lasting and memorable,” Poirier added of the program.

The duo sported new costumes in red and black, replacing the former gray and black.

“Not that the gray and black was bad, because we love those colours and it was so interesting, but we felt like everyone was doing that this year,” Gilles explained, gesturing to Weaver and Poje.

“Because this program is a little bit abstract, I think for some people it’s hard to connect with,” added Poirier. “I think the gray also leaves a colder impression, so we wanted to make sure that as much as it’s abstract, it’s a warm program, and we’re welcoming you into our world. I think the bright color does that a little bit more.”

The surprise bronze medalists of the night were the ecstatic Élisabeth Paradis and François-Xavier Ouellette, who train with Marie France Dubreuil and Patrice Lauzon in Montreal. They earned 102.80 in the free dance to end the competition with 165.83 points. The team was over five points behind Alexandra Paul and Mitch Islam after the short dance and thought the third place spot was an impossibility, even with their endearing Simon & Garfunkel program.

“It’s a crazy surprise,” Paradis said of the podium finish. “We came here (to Halifax) thinking the third place was something reachable and then after the short, we thought we were too far. Maybe that’s why it went so good because we didn’t have any pressure and we just skated the best we could. We didn’t really think we had a chance to climb five points.”

As the team has not met the ISU minimum short dance technical score, their ticket to worlds will only be punched if they can meet that threshold, perhaps at the Four Continents Championships.