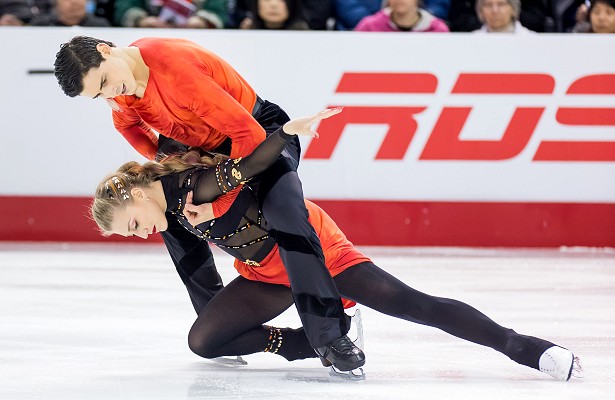 Known for invariably redefining themselves, it’s clear that Canada’s Piper Gilles and Paul Poirier have shown incredible progress in the 2015-16 figure skating season; especially in terms of speed, deep edges, and precision on the ice.

Earlier this season, the team finished first at Nepela Trophy, an ISU Challenger event, before winning bronze at Skate America and silver at Trophée Éric Bompard. While they didn’t qualify for the Grand Prix Final, Gilles and Poirier were undeterred and forged ahead to prepare for the 2016 Canadian National Championships.

In Halifax, the duo delivered a solid short dance which featured a level four lift and twizzles, earning 70.63 points for a second place finish. It was obvious that Gilles and Poirier, who train in Scarborough, Ont., had benefitted from the additional training time since Trophée Éric Bompard. Their whimsical and fun routine, along with their colorful ensemble, was well-received by the audience.

“We have been working so much the last two months on just ironing out some kinks,” said Poirier. “Things that were part of the program that were getting sticky and ruining the momentum from building throughout.”

The 2014 Four Continents silver medalists were really happy with their performance as they were able to lose themselves in the characters and the story line of the dance, something they had been working hard on.

“It wasn’t just a technical exercise where we were trying to rack up points,” said Poirier. “It’s very hard to get out of the mindset, so I think in that respect, we were really pleased with the performance and the scores.”

“It took us a little bit to really understand what characters we were trying to portray,” Gilles added. “We had an acting and ballroom coach come in and look at it. It’s very complicated, but we want to make sure that the comedy moments really stood out. I think we’ve done a great job with that so far, but it’s definitely been a challenge.”

Their goal this season has been to close the gap between themselves and the top teams in the world so that they can become podium contenders for the next Olympics.

“What we are really looking for is an increase in our scoreage,” explained Poirier. “Obviously, we want to climb up those rankings as much as possible. We have Kaitlyn (Weaver) and Andrew (Poje) to chase, and that is definitely motivating. It’s always satisfying to win a medal, but we always want to be improving and pushing the boundaries for ourselves and for the sport.”

The routine featured an innovative rotational stationary lift, and the dancers showed good edges and speed in their footwork. Like the short dance, the team earned many positive grades of execution (GOE) for all their elements, scoring 109.19 points for second place and overall (179.82).The 24-year-olds mesmerized the audience with their intriguing and visceral free dance to Jorane’s “She Said” and “Neverland” by Takenobu Mitsuyoshi, which the skaters helped choreograph along with coaches Carol Lane and Juris Razgulajevs.

“Those things were quite big!” Gilles said of the scores. “That’s the first time we’ve had scores that high, so I think that’s showing that everything we have done is moving in the right direction. I think we’re very confident in this program now. I feel like we are really starting to embrace our different skating style and I think we’re really starting to own it, so we’re very, very happy with that.”

As a matter of fact, the skaters were extremely pleased with both their programs at nationals and felt that the extra amount of training gave them time to think about what they wanted from their routines and what was needed to get them there.

“Ideally, in a program you want the sense of anticipation to rise and rise until you reach the climax, though within that ascent there are, of course, shades and microvariations,” Poirier related. “This meant reworking elements and transitions, as well as really ironing out the emotional journey of the characters we’re portraying.”

It was noted that the ice dancers had changed costumes from the black and gray, which they wore earlier this season, to black and red. The change came about after Trophée Éric Bompard when the team decided they wanted to stand out more amongst their competitors.

“This year a lot of people have gone with very mono tone colors like black, grey, and white, which is great and originally that’s what we wanted,” said Piper. “We wanted the program that is very dynamic and interesting to make a color of its own and not have people be distracted by what we were wearing.”

However, as the program developed, the skaters felt they needed to do something that would draw people in more.

“Having a color that is tie dyed in orange and red created this wonderful warmth which I think has made people see a whole other side to the program,” Piper explained.

The music to for their free dance was found by accident. Poirier found the first piece while on a plane, and this in turn led both skaters on a wild goose chase to find something to pair with it.

“We had so many ideas this year when selecting music,” said Poirier, “but what we were really going for was a piece that would allow our bodies to explore different kinds of movements. The pieces of music we selected immediately inspired us when we took to the ice to explore what we could do and what we could create.”

The entire program began with movement, and once the team created the aesthetic they liked, they went on to determine what the movement meant to them and what they wanted to portray.

“That process took a long time and I think it’s something that’s still unfolding as we go through the season,” said Poirier. “In a lot of ways, the program reflects our journey; two people who must take their bodies, habits and idiosyncrasies and make them come together. It’s something you can thirst for as a new team but something that can only be reached with experimentation, trust and time.”

As with most athletes, while they were happy with their performances and the scores reflected their hard work, they found areas they felt needed improvement when they returned home. They took a couple of days off to rest and then resumed training.

While there wasn’t enough time to make any serious changes to their programs, the four-time national medalists have been focusing on reworking the pattern of the short dance to adjust it to the wider arena and to try to nail down some key points that they missed at nationals.

“It’s mostly been a time of maintenance and refinement,” Poirier summed up. “This was not our main focus heading into nationals as we were doing some major program restructuring, and it cost us a few points in the short dance there. This is something we cannot afford when we are in a very deep international pool.”

The 2016 Four Continents Figure Skating Championships is taking place this week in Taipei City, Chinese Taipei, and the skaters will take the ice for the short dance on Thursday.