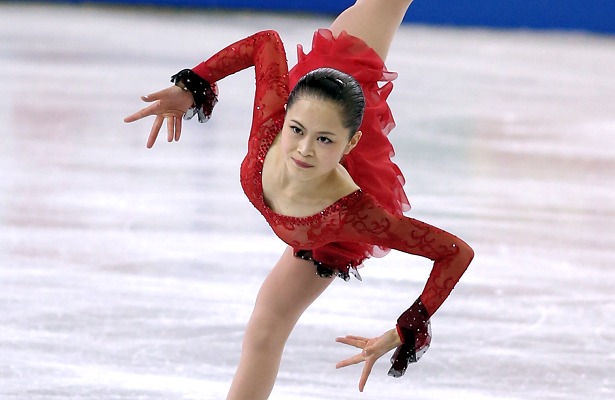 For Japan’s Satoko Miyahara, the 2015-16 figure skating season has thus far been packed and fruitful. She started her season early in mid-September at the U.S. International Figure Skating Classic held in Salt Lake City, Utah, setting a good tone for the season with a gold medal. On October 3, in front of her home crowd in Saitama, Japan, the reigning Japanese champion contributed to Team Japan’s victory at the Japan Open by pulling off a strong free skate.

Three weeks later, the Kyoto native went to the U.S. again to compete at Skate America—her first Grand Prix event of the season. Miyahara gave two decent routines, however, there was a fall on the solo triple Lutz in the free, as well as some under-rotation calls and edge calls on her triple flips, which cost her points in a competitive field. As a result, she finished third in both segments and overall.

At the end of November, the Skate America bronze medalist went on to compete at NHK Trophy in Nagano, Japan. In front of the home crowd, Miyahara refreshed her personal best in both the short and long program by delivering two virtually clean performances except for one under-rotation call and one edge call. The bronze medalist from last year’s event won the gold this time with a total score of 203.11.

“I don’t get the real feeling yet that I have won my first GP gold medal,” the NHK Trophy winner commented right after the result was announced, “but I feel so happy right now. I wasn’t satisfied with my performance at the last event, so I kept telling myself not to think too much, keep calm and just do what I can do in everyday training.”

Nevertheless, the 17-year-old was happy with both per performances and was delighted that she had not only achieved her goal to break the 200-point barrier, but to qualify for the 2015-16 ISU Grand Prix (GP) Final.

Two weeks later, Miyahara debuted at her first senior GP Final in Barcelona, Spain, without any particular goal in mind: “Every skater here is great. I don’t want to think about the placement, but I just want to enjoy the event and skate the best I can like what I did at the NHK Trophy.”

The student of Mie Hamada, Yamato Tamura, and Yoko Niino did even better than she had in Nagano. Except for receiving an edge call on the triple flip in the short program, all her other jumps in both programs received positive grades of execution (GOE), and all her spins and step sequences achieved a level four. Miyahara was rewarded another personal best of 208.85, and brought home a silver medal.

“The thing that makes me happy the most is that I was able to beat 140 points in my free skate,” the silver medalist noted. “I am very satisfied with the podium finish and what I did. I think now I can say I can compete at the top level in the world, but I still have a lot of work to do, both technically and artistically, and I will train hard to improve.”

Right before Christmas, Miyahara continued her busy schedule to Sapporo, Japan, for the Japanese National championships. The defending champion continued her strong momentum and again delivered two close to flawless performances except for an edge call on a triple flip in the short and a shaky landing on her opening triple Lutz-double toe-double loop combination in the free of which the double loop was down-graded. As a result, she successfully defended her crown with a total score of 212.83.

“I felt extra pressure,” the skater recalled. “I was pretty tight at the beginning, and I felt a bit anxious after the mistake.”

However, Miyahara gained confidence through this gold medal and the results she had achieved thus far this year. She noted that she needs to fix her under-rotation problems and has been training hard to do so in preparation for the 2016 Four Continents Figure Skating Championships, which will take place next week in Taipei City, Chinese Taipei.

In retrospect of 2015, Miyahara demonstrated her competitiveness at big international events, standing on the podiums at Four Continents, Worlds and Grand Prix Finals, however, all her medals are silver.

“I always come second,” the World silver medalist noted, “I want to be the first and I want to win titles in the future. I believe there are many things I can improve and much room to grow. Even though I am not able to suddenly be ‘number one,’ I will definitely train hard to be better step by step.”

Miyahara listed the opportunity areas she wants to address. “I think my biggest weapon is my consistency, that I don’t often make huge mistakes; but compared to top skaters from other countries, I am not that good at presentation, especially facial expressions. I tend to be reserved during my performance, but I want to be more expressive.”

Being described by Coach Hamada as “the girl who always sits in the corner, so shy and quiet that no one can notice,” her shyness is something that Miyahara needs to fight.

“I don’t think I can change my personality, but when I skate, I try not to think that I am doing something in front of huge crowd,” she explained. “I am doing something that I like very much, and this way I can be more relaxed and bring out the best of me.”

The two-time and current Four Continents silver medalist also revealed that she is attending dance classes, including getting advice from a teacher from the Takarazuka Revue—an all-female musical theater troupe—in order to polish her presentation and how to connect with the audience.

“My Flamenco teacher told me that I need to demonstrate ‘hey, I am that good’ in my short program, but I feel I can only be 80 percent expressive as I should be in actual performance,” said Miyahara. “I need to try not to be shy and show more emotion—not only in training, but [off ice].”

As for technical part, GOE is a main focus for the skater at the moment, as the two-time national champion, who now trains in Osaka, Japan.

“I think I am able to earn more GOEs on my spins and steps,” she pointed out. “Besides, the quality of my jumps in training is usually better than in competitions. I want to improve these areas in actual competitions.”

Another way to climb to the top of podium is to raise the level of difficulty, and Miyahara revealed her plan.

“I don’t think I will change my current layout during the season, but when my triple-triple gets more consistent, I want to load it in the second half of my programs,” she shared. “I also think the triple Axel will be necessary in the future.”

Next week in Taipei, Miyahara expects to continue her momentum, bring out her best, and set a good tone for the upcoming 2016 World Figure Skating Championships next month.