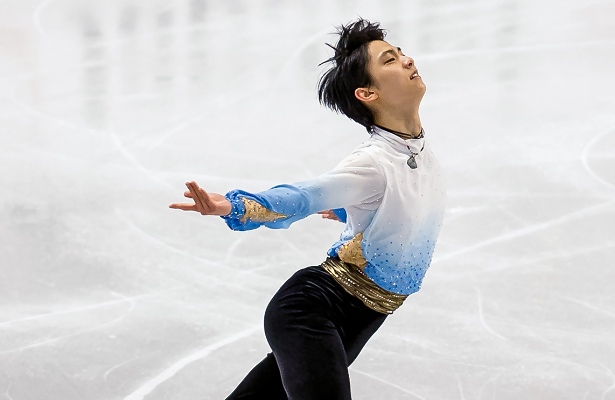 This season, Hanyu performed unprecedented technical difficulty, garnered record scores, and in Boston, has continued to ride this crest of momentum. He landed a quadruple toe loop-triple toe loop combination as well as a quadruple Salchow and triple Axel during his sublime performance to music by Chopin. He earned a program score of 110.56.

Upon the program’s completion, the Japanese phenom broke from his usual elegant character and roared with excitement; emphatic in his success. However, the record-breaker later admitted to nerves.

“The reason that I was so emotional at the end today was because I felt kind of different today,” said the 21-year-old through a translator. “I didn’t get nervous at Japanese Nationals or the Grand Prix Final, but today felt very different and with that circumstance I was still able to pull out a good performance and that is why I showed my emotions.”

“I cannot say that it was a complete program, such as the quality and speed of the quad toe and the level 3 on my step sequence,” Hanyu continued. “I was a little bit nervous before the short program because my practice yesterday did not go very well and I faced multiple obstacles in my training leading up to this event.”

On practice ice in Boston, Hanyu felt the hunger to reclaim his position atop the world, however, when taking the ice for the short program, it was a different story.

“I was kind of released from that feeling and I just skated,” he said. “I was able to focus on my skating today.”

Fernandez skated his “Malaguena” short program with panache and flair. The 24-year-old Spaniard landed a pristine quadruple toe loop-triple toe loop combination to open the program, but then fell on the quadruple Salchow. He rallied to land a triple Axel and portrayed the matador character of the program with commitment throughout. The fall, however, resulted in a score of 98.52; over 12 points behind his training mate.

“Adding two quads is really difficult,” admitted the defending world champion. “When we decided to put in two quads, we knew it was more risk to make mistakes in this program. Hopefully in the free program I can keep myself more [focused] and not do any more mistakes. Yuzuru is ten points away and I am going to try to make the best program I can.”

Chan skated a lively performance to Michael Buble’s “Mack the Knife” and landed a secure quadruple toe loop-triple toe loop combination, but fell on a leaning triple Axel before rebounding with a secure triple Lutz. The 25-year-old was awarded 94.84 by the judges. Despite the error, the performance was a season’s best given his uncharacteristic struggles performing the short program internationally. Nevertheless, the three-time world champion was chuffed.

“There is a lot of pressure that I haven’t been familiar with for two seasons,” said the eight-time Canadian champion. “So getting back into it is different. If I look at how I felt mentally and physically going into the program from Skate Canada to now, I am very happy with how much I have improved already this year. To be in the last group, to be in even the top three for me is a huge achievement, so I am happy with the result and I am happy with how I skated and how I performed, despite the triple Axel.”

Shoma Uno of Japan skated an energetic techno pop short program set to “Legends” by Sacred Spirit. The 18-year-old landed a quadruple toe loop and a triple Axel from a difficult spread eagle entry, but botched his triple-triple combination. Landing too far forward on the triple flip, Uno could only manage a double toe loop on the end and even hopped on the uncertain landing. He received a score of 90.74 from the judges.

“I am particularly disappointed that I made a mistake on the jump with the lowest degree of difficulty,” said the 2015-16 Grand Prix Final bronze medalist. “But the fact that I landed the quadruple toe loop and the triple Axel well is the one positive thing.”

Chinese jumping sensation Boyang Jin skated his dynamic flamenco routine near flawlessly. His only jumping error was a three turn between his quadruple Lutz-triple toe loop combination. His triple Axel and quadruple toe loop later in the program were spot on and helped him to achieve a score of 89.86.

“I think my overall performance today was not bad, however, the mistake on my first jump might have impacted the overall flow of the performance,” observed the 18-year-old. “I have confidence heading into the free. I think my rival is myself. I want to skate the best I can.”

American fan favorites Adam Rippon and Max Aaron are seventh and eighth, respectively, and both received roaring cheers from the Boston audience.

Rippon delivered a clean short program with a triple flip-triple toe loop combination, triple Axel and triple Lutz. The 26-year-old’s expressive and choreographically intricate program to Queen’s “Who Wants to Live Forever” earned him a score of 85.72.

“It’s an incredible experience to skate at a world championship at home and it’s unlike anything I’ve done before and I’m definitely one of the luckiest guys in the world to have that experience,” Rippon said.

The U.S. National Champion is hungry to attempt the quadruple Lutz in his free program on Friday.

“I’ve done some of my best quad Lutzes in practice here,” he hoted. “I am ready for the challenge.”

Teammate Max Aaron struggled in his dramatic short program to “Nessun Dorma,” touching his hand down on the quadruple Salchow. He landed the triple Axel and triple Lutz-triple toe loop combination, however, had trouble with his change foot camel spin (level 1) and only received a level 2 on his footwork.

“I would obviously love to be ten points higher, but mistakes add up and they add up quickly,” said the 24-year-old. “For the mistakes I made, I am happy with the score. That was a tough skate for me and I know it happens. Unfortunately, it happened here. I have been trained to work through it.”