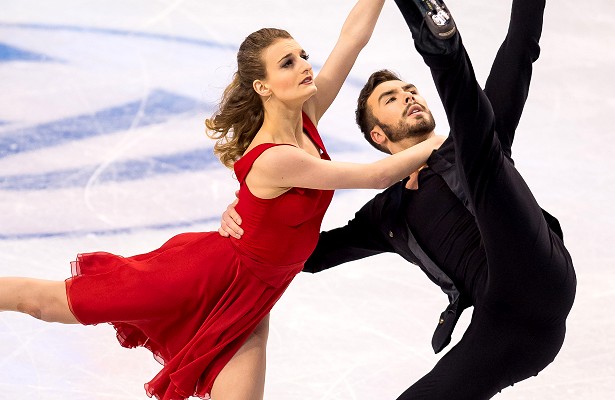 The 2016 ISU World Figure Skating Championships kicked off today with the Short Dance in Boston, Massachusetts, with the French team of Gabriella Papadakis and Guillaume Cizeron taking the lead. USA’s Maia Shibutani & Alex Shibutani and Madison Chock & Evan Bates are currently in second and third, respectively, in what will be a close competition on tomorrow.

In a dramatic short dance featuring minor choreographic, musical and costume adjustments incorporated since the European championships, Papadakis (20) and Cizeron (21) finished first with a personal best score of 76.29. While all elements were graded as level 4 and earned positive grades of execution (GOE), the effortless twizzles were a lyrical highlight.

“We are so happy tonight that all those changes were appreciated,” said Cizeron of the team’s short dance set to the soundtrack of WE. “We worked a lot technically too, so I think that’s why it’s a really good score tonight and we’re so happy to have done it.”

“We’re very happy to have skated like this today,” Papadakis added. “It’s an experience for us to be first after the short dance, even if we are always more focused on the performance than the ranking. So for the rest of the competition, we are just going to skate as we trained for and we’ll see what happens.”

Coach Marie-France Dubreuil said the team made changes to “the composition at the end so that it peaked and was more positive and uplifting.” She was pleased with the outcome.

“It came together nicely,” said Dubreuil. “We were debating if we were going to change the music at some point.”

The coach went on to explain that some judges felt the team should “go with a more traditional Strauss-like waltz” in order to be more competitive with other teams, however, that is not what they wanted.

“Gaby and Guillaume don’t want to be like anybody else, so we wanted to stick to the march and something that’s more contemporary and different,” Dubreuil continued. “I am really happy it paid off.”

Maia Shibutani (21) and Alex Shibutani (24) rode their recent momentum from the U.S. National and Four Continents Championships to score a whopping 74.70 and finished second behind the French team. Their charming performance to “Coppelia” featured impressive speed and edges in the waltz. Their twizzles, which were placed effectively to the music, were met with great home country applause.

“We are excited about the direction our skating is going in the next years,” added Maia. “We just know that we’re so well trained for this competition and we’re having a great season so far.”

Chock (23) and Bates (27) skated a romantic short dance set to “More” by Andrea Bocelli and “Unchained Melody” by Il Divo, however, Bates had a skid on the twizzle sequence that dropped that element down to a level 3. The program, which demonstrated a strong connection between the team, earned a score of 72.46.

“At this event with this many good teams you just can’t afford that,” said Bates regarding the mistake.

“I’m a little bit disappointed in myself, but happy that we have worked so hard to get to this point and the program itself was well-received by the crowd. It could have been worse, that’s for sure. We still got a season’s best.”

Despite being eclipsed at events this season by other teams and a third place here after the short dance, the defending world silver medallists are positive about their gold medal contention.

“When you’re on top, it’s harder I think to maintain and keep pushing yourself,” Chock offered. “But when you’re coming from behind, I think the underdog spirit comes out and you just want to fight harder. So I think we’re in a good place. Obviously we want to be back on top and stay on top, but we are pleased with how today went. We were connected with each other and had a good time.”

Canadians Kaitlyn Weaver (26) and Andrew Poje (29) finished fourth skating to “The Blue Danube” by Strauss with a strong twizzle sequence and other elements, however, two level threes resulted in a score of 71.83.

“Where the disconnect was between (the performance) and our score I am not sure, but that’s not what we can control,” said Weaver. “We were selling everything for what we’ve got and that’s what we’re going to do tomorrow as well.”

“Every caller is looking for something different,” she added. “It’s not very standardized, so it’s all about the details and there must have been something we overlooked I guess.”

The team fell on their backs attempting a leap in an off-ice warm up leap this morning prior to the ice dance practice, but Weaver said it didn’t effect their skate.

“Both of us were a bit stiff and sore, but that had nothing to do with our performance this afternoon,” she said. “We’re tough cookies.”

Teammates Piper Gilles and Paul Poirier delighted the crowd with their light-hearted and playful routine to a Beatles medley, showing full control throughout. A sweep of level 4 elements earned the team a personal best score of 70.70. For more fluidity to the routine and to increase their level average, the team changed their music following the Four Continents Championships, swapping out a Mozart section for more Beatles pieces including “Norwegian Wood” and “Ob-La-Di, Ob-La-Da.”

“We were discouraged after Four Continents,” Poirier said of their fifth place finish in Taipei. “We didn’t get the scores we wanted and we didn’t feel strong, so we needed a fresh page to motivate ourselves and be in a good mindset coming here. We’re relieved that the choices we made paid off. This event was a big black box and we didn’t really know what to expect.”

Their placement puts them in the final flight of teams for the free dance.

“It’s something new for us and something that we’ve wanted and it’s one of the things we really hoped we’d be able to do this year,” said Poirier. “It doesn’t change our strategy. We really want to push and I think it will be exciting to be with the top teams in the world and be sharing the ice with them. They’re all people we’ve skated with before and really we just have to go out and focus on our job and ride this momentum.”

Anna Cappellini (29) and Luca Lanotte (30) of Italy delivered a strong, yet playful routine to “Merry Widow” by Franz Lehar, however, Lanotte finished a moment early on a twizzle. The 2014 World Champions scored 70.65.

USA’s Madison Hubbell and Zachary Donohue, both 25, put out a sublime short dance to “Hallelujah” displaying confidence and showing effortless transitions and solid twizzles. The team scored 68.44. Tenth at last year’s worlds, the score places them in seventh place; a fulfilling improvement.

“It’s hard to say goodbye to this program,” Hubbell said of her emotional state at the performance finish. “It’s our story in this program, and in the end, when it’s so joyful and overwhelming, it is just bringing back hope to our skating.”

“We have always been people who love the sport, but when you go out and time after time after time you feel disappointed or you feel like you’re falling back, it takes the wind out of your sails,” she continued. “This season has been so confidence boosting and our new coaching staff has really made us believe more in ourselves and what we’re capable of.”

“We have been training so hard to hit the 70 mark this season,” said Hubbell of her indifferent reaction to the scores. “It’s a big step up from what we did last year, so we are still extremely pleased with our progress.”