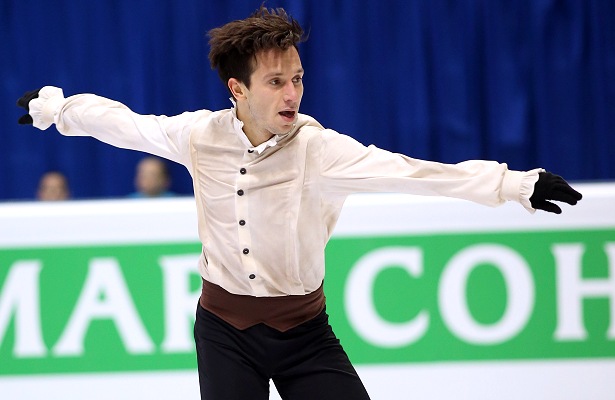 Although Bychenko said that it sunk in quickly that he was the silver medalist at Europeans, it was hard for him to describe his feelings.

“I don’t really know yet how to say or to explain it,” said the 27-year-old. “It’s super! I’m enjoying it. It is interesting, everything is different.”

Since then, he’s been getting a lot more attention than he used to, although the Ukrainian-born skater has been around for a while. He is not a totally unknown, as he ranked fourth at Europeans in 2015 and has competed in the Grand Prix series, World Championships and even Olympic Games. He also won two smaller competitions, Mentor Nestle Cup in Poland in 2016 and Tallinn Trophy in 2014. However, the silver medal from Europeans is his biggest success by far until now.

“I can’t say that I waited for it,” he said. “Obviously I wanted to win a title earlier, to make the podium at Europeans and Worlds. Unfortunately, it didn’t happen for me, but I think it is better late than never, therefore I am pleased.”

His success proves that even at his age, one can come out and beat the favored youngsters. The veteran skater believes anything is possible and that it’s important to believe in yourself, strive for it, and work hard.

“You can always have success,” said Bychenko. “I think the important thing is to have the desire, a goal and a dream. I really didn’t want this huge chance let slip away. I didn’t want to prove anything to anyone, although there were many people that talked about me in a negative way.”

Mostly, the skater wanted to realize his dream and prove it to himself, as well as thanking his mother and grandfather for their support.

“They put me into figure skating when I was a child,” he recalled. “It was not easy, but they kept taking me to skating, and so I just couldn’t let this chance go as a lot of effort was put into my skating.”

Bychenko’s path wasn’t the easiest one. In 2010 he decided to switch countries and to move from his hometown Kiev, Ukraine to the USA for training.

“I didn’t see any future for me (in Ukraine),” he explained. “There was no support. I could say a lot of negative things, but I don’t want to. So I started to represent Israel because my coach in Ukraine at the time, Galina Kukhar, turned to the president of the Israeli Federation, Boris Chait, and asked him to give me the chance to skate. She knew that I really wanted to skate and wanted to go to Europeans, Worlds, and the Olympic Games,” recalled the European silver medalist.

Bychenko was able to obtain Israeli citizenship as he has Jewish roots from his mother’s side. Although it was hard for Bychenko to leave his family behind in Ukraine and adapt to his new life in Hackensack, New Jersey, he knew this was his chance to continue his career.

“It was very tough for me in the beginning,” he admitted. “Eventually I came to terms with it. I didn’t move and leave everyone behind in Ukraine because I wanted to, but because I went there to work, to train, and to achieve a result.”

Federation president Boris Chait wanted him to move to Hackensack, N.J., and join the team there. His daughter Galit, the former ice dancer who took the very first medal for Israel at an ISU Championship, is coaching Israeli and other skaters there. Bychenko was happy with this team right away.

“Now I have great people with whom I’m working with,” he said. “They gave me confidence from the very beginning and gave me the chance to believe. They support me, help me, and direct me the right way. This result is not just my merit, but the merit of my whole team and the Israeli Federation.”

At the beginning of the season, it didn’t appear that the 2014 Olympian would be able to follow up on his fourth place at Europeans in 2015. He finished 12th and 10th with subpar performances in his two Grand Prix events last fall.

“There were terrible performances in the Grand Prix in Russia and Skate America,” Bychenko admitted. “There was nobody to blame. It was my mistake as I didn’t approach this season seriously enough and I didn’t start it in the right way.”

The skater credits his team of coaches—Galit Chait, Roman Serov and Nikolai Morozov—for helping him to come back strong.

“My coaches worked with me, and everybody who is working with me helped me to get out of this depression,” Bychenko shared. “This happens to everybody. It is not possible that it is always going up and up. Sometimes there is a hole. Thank God, I was able to come out of it and again it is the big merit of all these people that are working with me.”

Bychenko is now preparing to compete at the upcoming 2016 World Figure Skating Championships later this month—his fifth appearance at this event.

“My job is, of course, to show two good programs and my goal is to make the top ten to earn a spot for my team mate (Daniel Samohin),” he said. “Overall, you can say that here our whole Israeli team is very strong. I really hope that my medal will push our whole team to win even more medals. We want to have a competitive team. Of course everyone was happy about the medal and I think this will be a good motivation for them.”