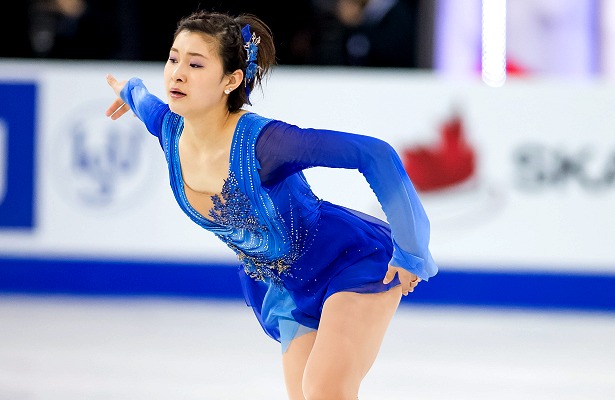 For Japan’s Kanako Murakami, the preparation for the 2015-16 season was much tougher than it used to be. In the final week of April 2015, two weeks after she competed at the 2015 World Team Trophy and contributed to Team Japan’s bronze medal, she twisted her ankle during an ice show tour, and had to cancel all the rest of her off-season shows.

“The injury was one of the heaviest in my career so far, and it really took me a lot of time to recover,” Murakami recalled. “It wasn’t until September that I was able to resume routine training. It was so late that I couldn’t adjust myself and get well prepared before the new season started.”

As a result, Murakami described her early season performances as “sluggish.” She finished off the podium in all three of her international competitions: seventh at the Challenger Series U.S. Classic and fourth at both of her Grand Prix (GP) events in Canada and France.

At the end of December, the 21-year-old skater went to Sapporo, Japan, to compete at her eighth senior Japanese National championships. Her overall condition improved and she was able to pull off stronger performances than previous events. However, in a highly competitive field, the four-time national medalist placed only sixth overall and wasn’t selected to represent Japan at either the Worlds or the Four Continents.

“My jumps were getting lost earlier, but now they are gradually finding the way home,” the skater from Nagoya, Japan, summarized of the season thus far. “I want to train harder and fix the problems I found in myself.”

The following month, three-time world champion Mao Asada announced her withdraw from the Four Continents Championships in order to focus on the World Championships in March. Consequently, Murakami was called up as the first substitute and went to compete at Taipei City, Chinese Taipei, the exact place she won the event two years ago.

The 2014 gold medalist gave her best performance of the season in the short program and was placed second in the segment, refreshing her personal best with 68.51 points.

“It is the same rink I competed in two years ago and I was able to revive the feeling I had,” said Murakami. “It has been a while since I was able to show my best in a major competition, so I was just very happy that I could do it.”

However, her free skate, set to the music of “Sayuri” didn’t go as well. The skater stumbled and popped many of her jumps, receiving several negative grade of execution (GOE) and under-rotation calls. She finished only 13th in the segment and slipped to seventh overall.

“I’ve been doing well in the morning practice, but I lose my confidence when it comes to the free skating,” said the 2010 World Junior champion. “It is regrettable that I couldn’t do what I’m capable of.”

Nevertheless, the result from the short program is a confidence boost for Murakami, as she revealed, “after I finished my short, I strongly felt ‘Ah, I can still do it!,” she recalled. “I suffered in the free skate this season, but I believe I have enough physical strength to go through the free. I think I’m just not doing well enough, so next season I want to be able to bring more confidence and get the jumps done.”

The closure of Four Continents also marked the end of Murakami’s 2015-2016 season, the first time in six years that she did not make the world team.

“[Now] I’ve got a longer off-season than I used to have,” noted the skater. “I was not able to adjust and prepare in my last off-season, and I want to make it up in this off-season.”

Murakami has defined her plans and plans on practicing new jumps.

“I will try new triple-triple combinations other than the triple toe-triple toe,” she revealed. “What’s more, I am not giving up my Lutz, and I will practice using the correct outside edge.”

The skater also shared that after she started body training, focusing on the trunk of her body, she felt she managed to do the steps and spins using less strength, and was able to rotate faster in the air.

“I will continue to do that body training and hopefully it will help solve my under-rotation problem,” she summed up. “When I look at the young girls doing difficult jumps like nothing, I really think they are great, and know that I cannot jump like that.”

However, Murakami has been skating longer and feels that her experience will be reflected in her skating.

“I really like to perform in front of the audience, and over the years, I became able to receive good evaluation on my performance,” she observed. “I want to further polish myself, continue to perform, and I hope that one day I can say this is my strength with confidence.”

The student of Machiko Yamada and Mihoko Higuchi continued to share her thoughts on music choice for next season’s programs.

“Now I finally realize that rather than the music you chose because you like it, it is better to skate to the music that your coaches choose for you because they think it suits you,” said Murakami. “For example, my short program this season is very passionate and engaging with the audience, and I think it really suits me.”

“You are judged by people who watch you skate, and the people who watch me skate the most are my coaches,” she continued. “Although we haven’t decided what music we will use, I really look forward to what they will choose for me.”

In previous seasons, the 2014 Olympian used to participate in prefectural competitions after the international season ended, however, she might change that plan this year.

“I am still wondering whether I should join,” she shared. “I think what I need the most at the moment is not competition, but to ensure quality training in order to prepare for next season. I think I may adjust myself and get well-prepared through daily training and performing in front of the audience in ice shows.”

For now, the 21-year-old hopes to clear the obstacles in front of her, cherish the off-season, and make every day as meaningful as possible.