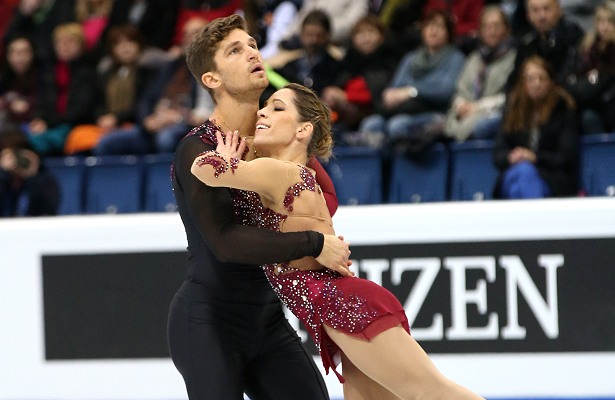 Italy’s Nicole Della Monica and Matteo Guarise, who teamed up four years ago, are currently ranked 13th in the World for the 2015-16 season in the Pairs discipline of figure skating. The 2014 Olympians have shown a good deal of progress since last year’s appearance at worlds where they finished 14th.

Earlier this season, Della Monica and Guarise took the bronze medal at the 2015 Ice Challenge, their first ISU Challenger Series (CS) event, and then followed up with a fifth place finish at 2015 Trophée Éric Bompard. The team then appeared at two more CS events, winning silver at the 2015 Warsaw Cup and placing sixth at the 2015 Golden Spin of Zagreb. In December 2015, they won their first national title together, edging out Valentina Marchei and Ondrej Hotárek.

In January, the Italian champions competed at the 2016 European Figure Skating Championships where they finished sixth. Although this is the same placement they had the previous year, their total scores this time (178.97) showed vast improved over last year’s (155.77).

“I changed myself a lot and still have much to do,” said Della Monica, 26. “I gained more self-esteem and now I’m more sure about what we are going to do. I found a new ‘me’ and now I am feeling more what I do and why I do it, so I’m becoming more solid in the executions.”

“We worked a lot on our mentality as it’s just as important to train as the body, sometimes even more,” added 27-year-old Guarise. “In addition to this, we started a collaboration with our Russian coaches last summer and this is also pushing us more as we had to the opportunity to skate with the champions for some periods.”

In Bratislava, Slovakia, the 2015 Ice Challenge champions put out decent program to “Magnificat” with the exception of step-out on the on the opening side by side triple Salchows. They landed a throw triple loop, and while their death spiral and lift earned a level four, their pair spin and footwork was graded a level three.

“We left a few points on the ice in almost each element and we didn’t skate as good as usual,” Guarise admitted. “It wasn’t too bad, but it can be much better and we showed this earlier in the season.”

“Maybe we had the memory of last year at Europeans when we skated a disastrous one,” added Della Monica.

In the free skate, Della Monica had a fall on the side by side triple toe combination and struggled with the landing of a throw triple Salchow, but otherwise the team was solid in their lyrical routine to music from the Romeo & Juliet soundtrack which they entitled “Cosmic Journey.” Both pair spins earned a level four as well as their back-inside death spiral and a reverse lasso lift.

“We were quite happy about our free skate,” said Della Monica. “We skated well and felt good. The fall on the toe loop was the biggest mistake that cost us.”

“We lost some levels in both programs,” Guarise observed. “The technical panel was a tough one, but they were like this with everyone. When you get to such a high level, the only way to distinguish the differences between so many good skaters is to be very strict.”

The idea for the music to their free skate was proposed by roller skating choreographer, however, due to timing differences, their coaches and choreographer Corrado Giordani worked with the skaters to put it together. Giuseppe Arena, a former ballerina who is now a choreographer, came up with the style of the routine.

“We didn’t want to represent the real story of the music of “Romeo and Juliet” as we had already skated to it in our very first season together, so we decided to give it another shape,” Della Monica explained.

“We thought that because this music is quite modern, we needed to find our own style with it,” Guarise added.

In preparation for the upcoming 2016 World Figure Skating Championships, the team is primarily focusing on consistency and technique. Their aim is to make the top 10.

“We are not changing anything because every element is good,” said Della Monica. “The only thing that could be with 50 percent of probability are the jumps and throw jumps, as they are for everyone else.”

Long-term, the skaters just want to stay healthy in hopes for a chance to participate in the 2018 Olympics.

“We think that the safest element to add would be the quad twist instead of quad throws because they are very dangerous, but we need to get our triple higher for that,” Guarise pointed out.

After worlds, Della Monica and Guarise plan to compete at the 2016 Team Challenge Cup in April which will be held in Spokane, Wash.