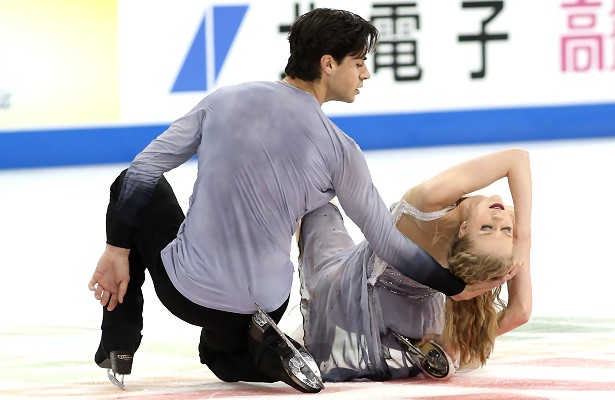 Kaitlyn Weaver and Andrew Poje of Canada edged out their Team North America teammates Madison Chock and Evan Bates of the United States, giving the team a sizable lead halfway through the Team Challenge portion of the 2016 KOSÉ Team Challenge Cup on Saturday.

The top score from each dance pair of the three continental teams counts toward the overall team score. The team competition will conclude tonight with the men and ladies free skate programs. The teams will be competing for more than $405,000 in prize money.

Team North America won both the pairs and ice dance segments of the competition and have a sizable lead at 259.04 points. Team Europe is second with 239.42 points and Team Asia is third with 201.96.

For Weaver and Poje, their final performance of their free dance to to “On the Nature of Daylight” by Max Richter, “This Bitter Earth” by Dinah Washington and “Run” by Ludovico Einuadi was redemption after they placed a disappointing fifth at the 2016 Worlds Figure Skating Championships.

“It’s sad when you feel unfulfilled after months of training,” Weaver said. “Now we can lay our heads on our pillows and feel at peace.”

Chock and Bates were happy with their performance to Rachmaniov’s “Concerto No. 2.” The score does not count toward the overall team score, but they posted the second highest score overall with 111.30 points.

The 2016 World bronze medalists struggled with the free dance all year, leading to numerous revisions throughout the season. However, they felt it all came together at the end of the season in Spokane, Wash.

“I think our last two performances have definitely been our best,” Chock said.

Anna Cappellini and Luca Lanotte of Italy posted the highest score for Team Europe with their free dance to selections from “La Dolce Vita.” They scored 108.96 points to help Team Europe place second overall in the ice dance segment.

The 2014 European and World champions said they felt a little less pressure with the team event since the result did not solely depend on them.

“You’re part of a bigger thing than just yourself,” Cappellini pointed out.

Penny Coomes and Nicholas Buckland of Great Britain scored 100.90 points for their free dance to “Exogenesis Part 1” and “Hurricane and Butterflies” by Muse.

Shiyue Wang and Xinyu Liu of China earned 83.13 points for Team Asia with their free dance to music from the Crouching Tiger, Hidden Dragon soundtrack.

Rebekah Kim and Kirill Minov of South Korea scored 82.18 points for their free dance to “Tobacco Road” and “Party Rockers. “