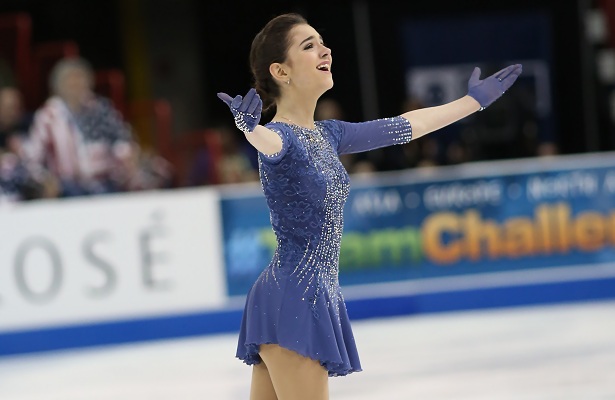 Wagner’s jumps weren’t perfect, but the audience responded to her performance, giving her a partial standing ovation when she was finished.

“I really had to fight because I’m absolutely exhausted,” said the 24-year-old. “Coming off such a great (World Figure Skating Championships), I set a very high bar for myself and I really wanted to end this program on a very strong note.”

Wagner’s program to selections from the Moulin Rouge soundtrack scored 143.20 points, the third highest score of the night, which helped Team North America win both the ladies free skate segment and overall.

The top two ladies score from each team counted toward the team total. Team North America scored 285.26 points in the ladies free skate, edging out Team Europe, with 284.86 points, by less than half-a-point.

“This is an incredible group of skaters,” said Team North America captain Kristi Yamaguchi. “Not only talented, but so much fight in them.”

When Wagner did not pull off a planed triple flip-triple toe loop combination, she added it to her second flip. The toe-loop was deemed under-rotated, but adding the jump was still a victory.

“I pulled that out somewhere deep inside of me,” said the 2016 World silver medalist. “I was happy to pull that out when I needed to.”

The top performance of the night in the ladies, however, once again belonged to Russia’s Evgenia Medvedeva. The 2016 World Champion showed her dominance yet again with a flawless performance that scored nearly 80 points for the total elements score (TES).

“When I was heading back to the team box, I heard (my team say), ‘Thank you,’ and I didn’t know what they were thanking me for,” the 2016 European champion said. “Then later they announced we were in second place.”

Gold’s only error in her free skate to Igor Stravinsky’s “The Firebird” was a hand down in a triple loop. She hit both her triple Lutz-triple toe and double Axel-triple toe combinations and added 142.00 points to Team North America’s score.

Gold said she kept her contribution to the team in mind during her skate.

“Everyone one else from team (North America) pulled their weight and I felt I dropped the ball for them,” the 20-year-old said about the head-to-head short program matchup. “It really put the extra fire (to do well).”

Russia’s Elena Radionova contributed to Team Europe’s score with what she considered a redemptive skate after a disappointing short program the night before.

She hit both her difficult combinations — a triple Lutz-triple toe and triple loop-single loop-triple Salchow during her program to the “Titanic” soundtrack and added 133.31 points to Team Europe’s score.

“I understood I had to step up for a new day and I have to get myself prepared for a new day,” the 17-year-old said. “Of course I wanted to perform well and I didn’t want to let my team down like I did yesterday. I think I skated very well.”

Satoko Miyahara’s free skate to Liszt’s “Un Sospiro” was flawless, generating the the second best ladies program for the night. The program, which featured two double Axel-triple toe combinations in the second half, scored 145.02 points.

“The first jump I was a little nervous,” admitted the two-time Japanese champion. “My feeling got better and better (to) the end of my program.”

Kazakhstan’s Elizabet Tursynbayeva also contributed to Team Asia’s program with a solid performance of her “Papa Can You Hear Me” program. The 16-year-old received 123.61 points for the program, which featured a double Axel-triple toe and a triple Salchow-triple toe in the second half.

Japan’s Rika Hongo had a few jump problems in her free skate to “Riverdance” by Bill Whelan, included under-rotations on the second jump of her triple flip-triple-toe loop combo. The 19-year-old scored 122.15 points.

Canada’s Gabrielle Daleman had her triple flip downgraded and had an under-rotation on her triple loop in her skate to selections from Astor Piazzolla. The 18-year-old scored 115.93 points.

Italy’s Roberto Rodeghiero, 26, scored 105 points for her routine to music from the Evita soundtrack.