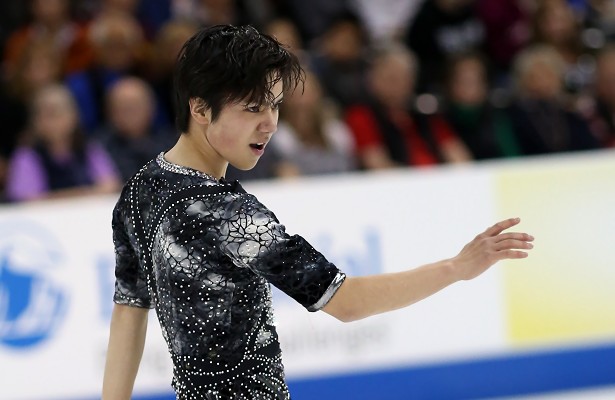 The crowd at Spokane Arena was buzzing as Japan’s Shoma Uno landed a quadruple flip—the first in international competition—during the head-to-head team singles competition of the 2016 KOSÉ Team Challenge Cup event at Spokane Arena in Spokane, Wash. on Friday night.

Among those buzzing was Uno himself. Leading up to the competition, he felt his chances of landing the jump was 50-50. During practices here in Spokane, he missed the jump several times, either popping it into a double or falling.

Back in 2010, Uno’s fellow countryman, Daisuke Takahashi, attempted the jump during the Winter Olympics in Vancouver, B.C. Due to the rules at the time, in which an under-rotation meant the jump only had the points of a triple, some believed the move cost Takahashi gold (he received bronze).

On Friday, the risk paid off for Uno. He came away with $5,000 in prize money for the highest short program score (105.74) of the night and helped Team Asia win the head-to-head competition overall.

“I was not sure I could make it,” said Uno, 18, through a translator during a news conference. “But since I made it, I feel really confident (about the jump) for next season.”

The singles short program competition featured head-to-head short program matchups of the 18 ladies and men skaters based on seeding by the team captain.

The team captains gave a 1, 2 or 3 seed to each of their ladies and men. All the skaters were grouped by seed and scored points for their team based on their short program score.

The winner of each matchup earned 12 points; second place earned 10 points and third place earned 8 points. Uno, Denis Ten of Kazakhstan and Boyang Jin of China all won their respective head-to-head matchups to help Team Asia win competition with 64 points. The team received $60,000 in prize money ($10,000 for each skater) for winning the competition.

“Today, each player did a great job,” Arakawa said in a news conference following the event.

The scores earned during the head-to-head competition will not count toward ISU’s personal or season’s best. The points will also not carry over into the Team Challenge Cup free skate event, which will feature all disciplines, including pairs and ice dance.

Ten got Team Asia off to a solid start with a perfect short program to “Misa Tango” by Bacalov. He hit all his jumps with ease, including a quadruple toe-loop-triple-toe-loop combination, a triple Axel and a triple Lutz. He scored 92.63 points.

Ten’s skate was especially noteworthy considering equipment failure: One of his skates broke, forcing him to leave his warmup early to fix it with tape. However, the 22-year-old took it in stride.

Ten noted how often he had risen from past setbacks, such as injuries. In spite of them, he still has won some of the sport’s biggest prizes, including two world medals (2013 and 2015) and Olympic bronze at the 2014 Winter Olympics in Sochi, Russia.

“I just tried to be focused,” he said. “I wanted to give more to the audience.”

USA’s Adam Rippon had trouble with his triple Axel during his skate to “Who Wants to Live Forever” by Queen, but scored positive grades of execution (GOE) on the rest of his elements. He earned 86.05 points to place second in the matchup.

The current U.S. Champion noted there was a new entrance to the triple Axel.

Mikhail Kolyada of Russia, a last-minute substitute for the team event after his countryman Maxim Kovtun had to withdraw, placed third with 70.60 points.

The 21-year-old had problems in his program to “Nightingale Tango” and “John Gray.” He popped the first jump in his planned quadruple toe-loop-triple toe-loop into a triple toe-loop, not completing the combination, and fell on a triple Lutz. The Russian silver medalist placed third with 70.60 points

Uno stayed focused after getting the quadruple flip and landed the rest of his jumps in his program to “Legends” by Sacred Spirits. His difficult program also included a quadruple toe-loop-triple toe-loop combination and a triple Axel in the second-half, which earned him additional points.

This was the first time the 2015-16 Grand Prix bronze medalist landed two quadruple jumps in the short program this season, putting him in a distinguished group of skaters that includes current and two-time World champion Javier Fernandez of Spain, reigning Olympic gold medalist (and fellow countryman) Yuzuru Hanyu and Jin.

Canada’s Nam Nguyen fell on both his quadruple toe-loop and triple Axel, which was also under-rotated. The 17-year-old earned 64.91 points for his program, which were selections from the “The Killing Fields” soundtrack, to place second.

Michal Brezina, 26, also struggled in his program to “The Way You Look Tonight.” The Czech popped his planned quadruple Salchow into a single and fell on the first jump of his planned triple flip-triple toe-lop combination as well as during his step sequence. He finished third with 64.54 points.

Jin fought for the landings of both his quadruple Lutz-triple-toe loop combination and a quadruple toe-loop in his program to “Tango Amore” by Edvin Marton.

“Of course there are some little flaws, but for the performance, I am still satisfied,” said the Worlds bronze medalist.

Brown introduced a new short program to “Appassionata” by Secret Garden, which he will continue to use for the 2016-2017 season.

There were small errors that cost him points: he dropped his hand to the ice while landing his triple Axel, and a planned level 4 combination spin was marked down to level 3. However, the former U.S. champion earned high levels of GOE on his other elements to earn 87.72 points, enough for second place.

Russia’s Sergei Voronov fell on his planned quadruple toe-loop (which was deemed under-rotated) and was unable to complete a combination. He also doubled a planned triple Axel during his “Butterflies and Hurricanes” program. The 28-year-old placed third with 62.55 points.