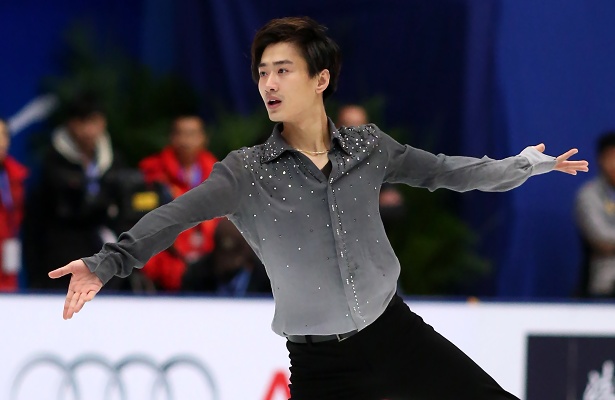 Nan Song of China performs his short program at 2015 Cup of China.

Three-time Chinese national figure skating champion Nan Song officially announced his retirement on April 4, 2016. The 25-year-old began considering his retirement after his performance at the 2016 Four Continents Championships in February. After his free skate, when being asked what he would do next, he thought for a moment, and then revealed, “I wasn’t thinking about it before the competition, but now it may be the time for me to think about retirement.”

When Song won a silver medal at 2010 Junior Worlds, many hopes were placed on the figure skater to be a future star from China. In fact, he indeed delivered good results in his first two senior seasons, especially in the 2011-12 Grand Prix series when he brought home a silver and a bronze medal.

“I didn’t have huge achievements in my career, but I feel proud that I was able to prove that Chinese men skaters can do well on an international stage,” he said.

However, in recent seasons, the 2013 Winter Universiade winner has been struggling with his recurrent injuries, which gradually led to spondylopathy—a serious disorder of the vertebral column—especially in the lower back.

Before the Four Continents, the injury was causing the bronze medalist from 2014 so much pain that he described it as “a day felt like a year.” He went to compete regardless, and finished 12th overall. His teammates, Boyang Jin and Han Yan, finished second and third. After the free skate, the 2016 National Winter Games bronze medalist started to consider what it would mean for him if he continued to compete with injuries.

“We have really good young talents now,” Song shared, “maybe it is time for me to step down, especially with these injuries.” He paused for a while, and then continued. “I really love figure skating, but I also love my body. But still, I don’t want to leave the skating world.”

Song requested the media not to report anything at the time as he had not made up his mind. Three days later, he finally decided it was the best for him to end competitive career. The federation agreed to his decision.

Song stayed silent for another month, because he was listed as the substitute for Team China at 2016 World Figure Skating Championships. On April 4, the day after the Worlds ended, he posted a video on the website of Skating China, officially announcing his retirement.

“Everyone will eventually come to a time to step down from the stage, but I have never left any regret,” he said. “I would like to thank you for all your support and encouragement over the years, and thank you for always being by my side, regardless if I am in my prime or not performing well.”

“In fact, it is really hard to leave everything behind, but I hope you understand,” Song continued. “We skaters look so bright on the stage; all of us may not want to leave, but all of us have something that we can’t fight. I hope you can understand and support us. I hope I could have your wishes in the next stage of my life. I also wish you good health and happiness. Thank you!”

As for the future, Song doesn’t have a fixed plan yet, but he shared back in February that “I love figure skating from my heart. Even though I may not be competing, I don’t want to leave the ice rink. Maybe I will be a coach, I don’t know yet, but I am sure you will see me again close to the ice.”