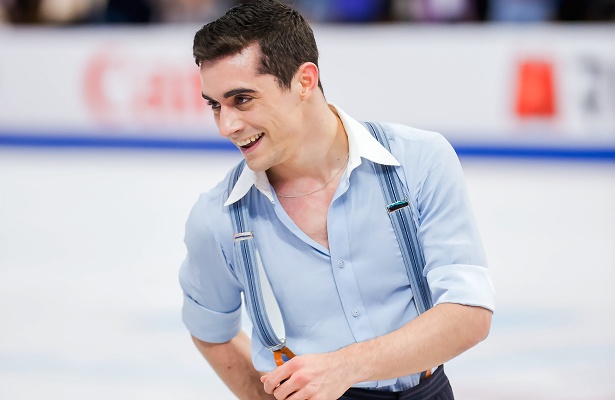 Fernandez performed his expressive “Guys and Dolls” program with flair, drawing the audience into this performance with each successfully landed jump. His technical feats included a quadruple toe loop, quadruple Salchow-triple toe loop combination, another quadruple Salchow and two triple Axels. He scored a personal best of 216.41 in the free skate for a total combined score of 314.93.

Making the finish even more impressive was that the Spaniard was suffering an inflammation in his right heel. As a result, Fernandez was unable to practice much on the day of the free skate and felt uncertain approaching the final.

“It was the last program of the season, I didn’t think about how important it was for me to win or anything, just kept going from jump to jump,” the 24-year-old said. “Before skating, I knew that I had a chance to win, but that I would have to do a clean program and I did.”

Hanyu nearly captivated the crowd with his soulful “Seimei” program. Like the warrior he was portraying, the 2014 Sochi Olympic Champion had to battle a few jumps, particularly the quadruple Salchows.

“I think that I was very calm before the free skate, but it’s not only this calmness that affects a performance,” the Olympic champion later reflected. “Of course, there is my physical condition and my mental condition, and I think that the balance between these two is very important. I do not think that I was able to achieve this balance.”

Hanyu’s first attempt on the quad Salchow required a hand down in order to save the landing and the second sent him crashing to the ice. A three turn coming out of his triple Axel and another hand down on the triple Lutz sealed his fate with a score of 184.61, opening the door for Fernandez to roar through. Hanyu’s total combined score was 295.17.

“I can’t explain my feelings,” said the 21-year-old. “I really am a little regretful about my long. I am really sad, and I am really happy for Javi’s program. I want to do it again.”

Jin skated his animated “Dragon Racing” riddled with difficulty, but had uncharacteristic problems with his jumping passes, including unpolished landings on the quadruple Lutz, Salchow and toe loop. He was able to move up to third place with a free skate score of 181.13 and total combined score of 270.99.

Nevertheless, Jin was excited to the first man to medal for China at a world championship event.

“For me, the meaning of it is really huge,” said the 2015 World Junior medalist. “It made my goal clearer for next season. For next season, I definitely want to train harder, do better performance, and get better results.”

Mikhail Kolyada of Russia performed cleanly to his “The Nightmare Before Christmas” free skate which was equal parts mysterious and playful. He scored 178.31 for a total score of 267.97.

Three-time world champion Patrick Chan struggled during his Chopin routine, tripling his planned opening quadruple toe loop, crashing into the boards on his quadruple toe loop-triple toe loop combination, popping the second planned triple Axel, and doubling a planned triple flip. He scored 171.91 in the free skate, but in fact pulled the second-highest program component scores of the night. He placed fifth with a total combined score of 266.75.

“I am not happy,” the Canadian said, surprised by his skate. “After Four Continents, I felt like I was in complete control of what I could do and skating last is a common spot that I have been competing a lot this year so it was very comfortable.”

“I feel like I have a renewed idea of why I am doing this,” said the 25-year-old, reflecting on his season. “No regrets at all,” he added, steadfast in his Olympic aspirations.