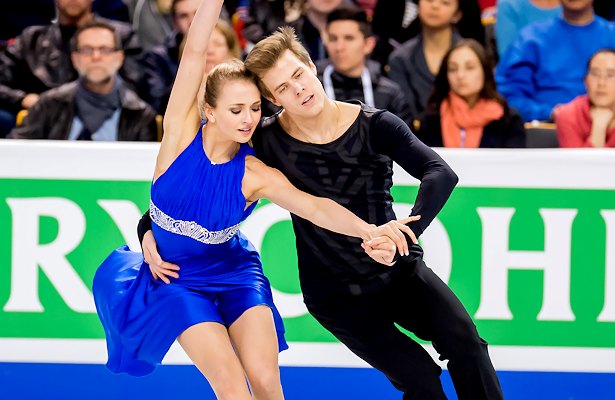 Russia’s Victoria Sinitsina and Nikita Katsalapov competed in their first European and World Figure Skating Championships as a team this season.

In their second season as a team, Russia’s Victoria Sinitsina and Nikita Katsalapov made it to the 2016 European and World Figure Skating Championships, showing much improvement over their first season where they even failed to make the podium at nationals. The team came in fourth in their debut as a team at Europeans and ninth at the Worlds in Boston with solid performances. Both ice dancers see these results as a good starting point to build on for next season.

“We skated well at Worlds,” Katsalapov noted. “Marina Olegovna (Zueva, coach) rated the short dance as the best of the season. We skated the free dance better in practice, though, but it was good for a competition. Overall, we improved our skating.”

However, Russia did not regain a third spot for next season for the ice dance teams as Sinitsina and Katsalapov placed ninth and teammates Alexandra Stepanova and Ivan Bukin finished 11th. The competition was just too tough.

“We watched the competition (at Worlds) and everyone has been skating great, really, really strong, and they’ve been skating together for a long time. They are proving it over and over. We are skating together in our second year and we already made it to the top ten,” Katsalapov said. “From there, we only want to move up. Everything is still to come for us. After a short break we’ll resume our work.”

“Last year, we didn’t even have time for a break,” added Sinitsina.

The team went back home to Moscow for their vacation after Worlds to see their family and friends. Meanwhile, they have adapted very well to living and training in Canton, Michigan, in Marina Zueva’s group.

“Obviously we feel at home already in America,” shared Sinitsina, who just turned 21. “After all, we’ve been there for a while. The atmosphere in our group is great and everyone is so supportive. I miss my family and friends, of course, but it is very convenient to train in America. There is nothing that distracts you from your work.”

Their second year in the U.S. definitely became easier for the team, although very different from what they were used to in Russia.

“We switched our mindset and we got used to it,” said 24-year-old Katsalapov. “Everyone does their own thing and everything is planned in detail. A training center in America is like an academy where you are learning something new every day. Marina tells us a lot, shows, explains, and gives lectures.”

Nevertheless, the ties to home are still strong. The costumes, for example, were made in Moscow and the parents take care of them.

“In all those years in figure skating, my mom knows all details about my costumes. She chooses the material. If it wasn’t for my mom, I’d probably skate naked,” joked Katsalapov.

“Indeed, our parents are taking care of our costumes as we are most of the time in America and never have time,” Sinitsina noted.

The skaters are now fully focused on their training, but both would like to improve their English.

“I’d like to receive a green card and perfect my English and go to business school,” Katsalapov revealed.

“I’m studying in the last year of the institute in Moscow,” Sinitsina offered, “but once I’m done, I’d also like to learn more English.”

Obviously, the Russian silver medalists have already started to make plans for the next season.

“We’ve thought about new programs, of course, but I’m not saying anything yet,” Sinitsina said, “but I hope that the next season will be very interesting.”

The goal for the team is to continue to improve.

“I think that we are getting the experience that we are still lacking,” Katsalapov pointed out. “This is necessary to understand how we need to skate and how we need to behave in competitions. If something is not going right, (learn) how to fix it. That is one of the main tasks, but I think the progress of our partnership is obvious. As a matter of fact, we’ve improved in everything.”