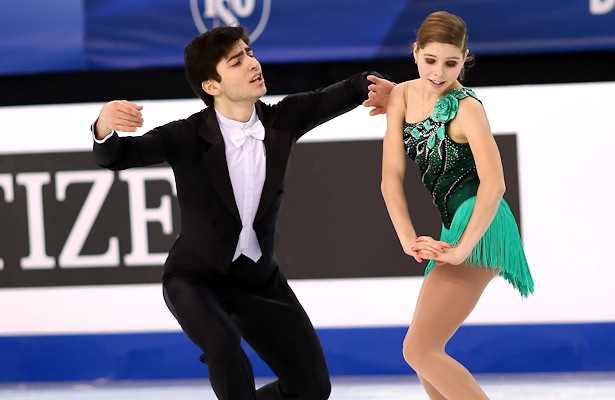 Anastasia Mishina and Vladislav Mirzoev of Russia seemingly came out of nowhere to claim the silver medal in their debut at the 2016 ISU World Junior Figure Skating Championships this past March. Competing in their second season together, they only had three international competitions on their record – a fifth-place finish at the ISU Junior Grand Prix in Colorado Springs in the fall of 2015 and two victories at the Bavarian Open in January 2015 and 2016.

However, the team from St. Petersburg laid down two solid performances, including triple jumps and throws, to step on to the podium in Debrecen, Hungary. It was the successful end of a season that had started with a shock at their very first Junior Grand Prix (JGP). Coach Nikolai Velikov had to cancel his trip at the last minute due to personal reasons, and the young skaters had to go by themselves.

“In Colorado Springs we by far didn’t skate as well as we could have,” summed up 19-year-old Mirzoev. “I think it was mostly because of the psychological pressure. It was on the other side of the world and it was the first time we had to cope with such a big time difference.”

Due to a subpar showing, the team was not assigned a second JGP event.

The skaters, who are also coached by Velikov’s wife, Ludmila, didn’t give up however. They continued to work hard, rebounding in the second half of the season. They drew quite a bit of attention when they won the title at Russian Junior Nationals in February in what was a competitive field.

Following Junior Worlds, the skaters went back to their usual practice routine quickly, built a new short program and polished their elements and skating skills.

“The (new short) program turned out to be cheerful,” said Mirzoev, adding that he wasn’t sure of the name of the music. “Then we had a training camp in Novogorsk (near Moscow) and worked with experts. We checked our elements for the next season and our levels.”

At the end of May, the team took their vacation, which Mirzoev used to study for his exams at the Lesgaft Institute of Physiculture in in St. Petersburg, Russia, where he finished his second year. Mishina, who turned 15 in April, is still in school and also had to pass exams this past spring.

The World Junior silver medalists plan to compete at both the junior and senior level in the upcoming season and most likely will keep their entertaining long program to “Attention Mesdames et Messieurs” by Michel Fugain and “La vie en rose.”

“For the seniors, we’ll add some music and a lift,” Mirzoev explained. “Plus we’ll do a new jump combination consisting of a triple toe-triple toe-double toe to make the program harder. There is also an extra lift, so it will be more consistent to skate a program we’re used to than to do a new program with new transitions and elements.”

Like many of the top pair skaters, the Russian Junior champions have been thinking about quads.

“We’ve been trying the quad throw Salchow, but only in the gym at this time,” Mirzoev shared. “Whether we’ll include it into the program or not, time will tell. We didn’t try the quad twist yet and we probably won’t try it as there is not much difference in height between Nastia and myself.”

The Russians can’t wait to test themselves at the senior level.

“The earlier the better,” said Mishina.

However, first they plan to do two JGP events and the goal is to qualify for the JGP Final.

“We also plan to compete at senior Nationals, and for that we’ll need to compete in two events of the (national) Russian Cup series as seniors in order to qualify,” Mirzoev noted, adding that they are not sure whether or not they will be assigned to international senior events as well.

The skaters claim that winning silver at Junior Worlds didn’t change anything for them.

“I think that you have to forget about a successful competition, because each competition means that you start from scratch,” Mishina pointed out.” You need to fight and prove again that you’re the best.”

“Probably you can say that we have another status now, but we didn’t feel that we did anything great,” her partner added. “It is very nice, obviously, and we’re proud that all the work we’ve done during the season wasn’t in vain.”

In their practice group of Ludmila and Nikolai Velikov at the Figure Skating Academy in St. Petersburg, there are five to six teams, all juniors. Mishina and Mirzoev are currently the top team in the group. While Mirzoev would like to train with senior teams, Mishina doesn’t feel it to be that necessary in order to progress.

“I think you can learn from juniors as well,” she noted. “Each pair does have something of their own. You can look at it and try to repeat it. It is not necessary that they’re older or seniors.”

Mishina is from St. Petersburg and started skating when she was lured into the sport by a friend when she was four and a half years old. Mirzoev comes from Vladikavkaz in the Caucasus, where wrestling, judo and soccer are popular sports. However, when he was eleven years old, an ice rink opened in his hometown and he soon discovered that figure skating was his sport.

“My family always supported me, and my relatives as well,” he said. “Although figure skating was new for them, nobody ever skated before in our family. Some friends didn’t understand it and said, ‘What the crap are you doing?’ But once I started competing first at smaller competitions and then at national competitions, they started to respect and support me.”

In order to progress, Mirzoev had to leave his home at age 14 and was in Rostov-on-Don for two years before moving to St. Petersburg. He eventually switched to pair skating in early 2014.

Mishina is Mirzoev’s first partner while she had one other partner before him. She went into pair skating on the suggestion of her singles coach, pair skater Fedor Klimov’s mother.

“I like that I’m not competing alone, that I have a partner with me who supports me and holds my hand,” she explained. “We divide happiness and misfortunes and this makes it easier.”

The skaters say that they get along well, but they do have their disagreements.

“We are fighting quite often, but that doesn’t really affect us, because usually we make up right away,” offered Mishina.

“We always find a compromise, because we understand that we are working towards a common result and we depend on each other,” added Mirzoev. “We are smart and therefore we try to support each other and to listen to each other even if each one has their own point of view. We are both ambitious and aim for high results. So sometimes you have to give in, even if you don’t always agree.”

For the upcoming season, the team has set clear goals for themselves.