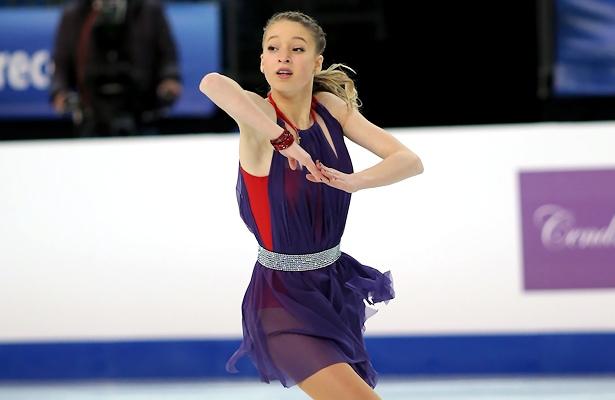 For World Junior silver medalist Maria Sotskova of Russia, the 2016-17 season means a lot of new beginnings. Not only is the skater moving up to the senior ranks, but has changed coaches. Previously coached by Svetlana Panova, the skater, unhappy with the training situation at the rink near her home, turned to Elena Vodorezova and now trains in the famous CSKA Moscow club.

“When there are 13 to 14 children on the ice, it is really difficult,” Sotskova explained. “Switching coaches was not a spontaneous decision, but a thought out and deliberate one. It was a hard split, but I chose another path for myself. I didn’t leave Svetlana Vladimirovna (Panova), because I was uncomfortable with her. She is a great expert and I’m grateful for all the work that has been done. I’m leaving not because of the coach, but because of the conditions.”

The Youth Olympic Games silver medalist sought out Vodorezova herself after Junior Worlds.

“For two days, I was tense whether she would take me or not,” the 16-year-old recalled. “Eventually all worked out.”

Sotskova quickly adjusted to commuting from her home in Reutov to central Moscow, as well as training alongside Adelina Sotnikova, Alexander Samarin and others.

Right after switching coaches, Sotskova and her new team built her two programs, both set to music by Alfred Schnittke. The short program was choreographed by Nikita Mikhailov, while former ice dancer Peter Tchernyshev did the long.

“To briefly sum up the idea, in the short program I’m like in a cocoon, trying to get out, but it is hard,” the skater explained. “The free program is light and airy. The nymph has turned into a butterfly.”

The concept for the routines was suggested to her by Vodorezova. At first they planned to use a different music for the short program, but then the idea came up to connect the two programs by using the music of the same composer.

A fresh start is just what Sotskova needed after a season that ended in disappointment for her. After finishing second at the Junior Grand Prix Final and Youth Olympic Games, the Muscovite was hungry for the Junior Worlds title. Unfortunately, a nagging foot injury, along with pressure, prevented her from skating her very best in Debrecen, Hungary. As a result, the skater had to be content with a silver medal, this time behind Japan’s Marin Honda.

The only mistake the young Russian made was an underrotated double Axel in the long program. She placed third in both the short and long program, but finished second overall by just over four points. The level of competition was so high that each point, each level and each grade of execution was important and made a difference.

There was extra pressure on Sotskova as her teammate Polina Tsurskaya, the heavy favorite, withdrew before the short. Then Alisa Fedichkina, the leader after the short program, dropped out due to injury before the long, leaving Sotskova as the sole Russian representing the country in the Ladies’ discipline.

“Junior Worlds was a tough competition for me, both psychologically and physically,” Sotskova admitted. “When I learned that Polina (Tsurskaya) and then Alisa (Fedichkina) wouldn’t compete, I felt a bit uneasy.”

The responsibility to secure three spots for next season suddenly was on her shoulders alone, but Sotskova pushed through and delivered two solid performances. Sotskova still was disappointed, but her tears dried quickly and she became even more determined.

In the future, the Russian would like to add a triple Axel or quad Salchow to her repertoire and has even tried the quad Salchow in practice before.

“Basically it wasn’t that bad, I even landed it,” Sotskova revealed. “It was underrotated, but I think if I try it on the lounge, it is possible to do it. However, since I’m moving up to seniors, I don’t know if it is worth the risk.”

One reason the Tallinn Trophy champion is moving up to the senior level, is the tough competition within the junior ranks in Russia.

“We have very strong athletes in juniors,” Sotskova pointed out, “and to be honest, I’m a bit afraid. I think the time has come to move up to the senior level because I competed for three seasons in juniors. The sooner you start in seniors, your rating will grow with each year and the sooner I can achieve high placements.”

Nevertheless, the skater is looking forward to competing at the senior level. “When the competitors are clearly better than you, you will strive to win.”

Sotskova describes her character as “stubborn.”

“I’m always getting what I want,” admitted the four-time Russian national junior medalist. “Even if it doesn’t work out right away, I will continue to work on it to make it happen. I’m not prepared to give up.”

Sotskova has been assigned to Trophee Bompard in Paris, France, and to NHK Trophy in Sapporo, Japan, for her debut on the senior Grand Prix of Figure Skating.