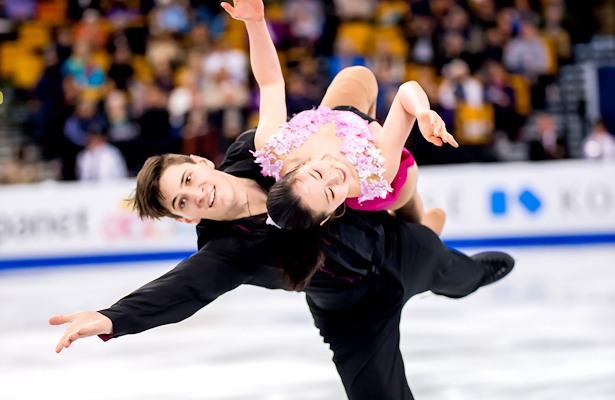 In the spring of 2015, Japan’s Sumire Suto and Francis Boudreau-Audet from Canada teamed up to represent Japan in the pairs discipline. The new team achieved some decent results this past season, starting with a seventh place finish at the Golden Spin Zagreb. The team then secured the Japanese national title in December, won the Mentor Nestle Nesquik Torun Cup in January, and finished ninth at the Four Continents Championships in February.

At the end March, the Japanese champions competed at their first World Championships in Boston, Mass. With Suto’s knee injured from a fall during a practice session, the pair could not pull off their best performance and placed 22nd in the short program, and as a result, did not qualify for the free skate.

“It is regrettable that we couldn’t do what we can do in trainings, but I feel happy just for being able to skate there,” 18-year-old Suto commented. “I really enjoyed the moments when we performed.”

In retrospect of their first season skating together, as well as the first season competing on the senior circuit, the students of Richard Gauthier and Bruno Marcotte believe they are on the right track.

“Our first day together was already good and the next day it felt better,” Boudreau-Audet recalled. “I think we skated together really well and we had a good connection from the beginning.”

“Winning Japanese Nationals was meaningful,” Suto added. “It made us want to be a team that could compete on the world stage and want to train hard for that.”

In order to be competitive on the international stage, the pair listed some specific areas they are working on, the first of which is more difficult elements.

“We are now working on putting the triple twist into our programs,” Suto revealed, adding that they wanted to improve all of their elements.

“I think we have a good coaching team,” noted Boudreau-Audet, 22. “Richard is in charge of spins and throws, Bruno for the twists, someone else for the (solo) jumps. Bruno always comes up with a lot of new ideas to try and Richard has really good thinking of throw jumps, so we are trying to find out what is the best for us.”

The early result of the off-season training has already shown as the pair performed a triple twist in Dreams on Ice, an ice show held during the first week of July. The next priority is to polish up their skating.

“We want to demonstrate senior skating (skills) and improve our unison and connection throughout the program,” Suto addressed. “Luckily, we were able to learn a lot from other pairs at international competitions.”

“Maybe we also need to improve our speed a bit,” Boudreau-Audet concluded.

Both skaters understand that communication is the key to improve connection, and are making efforts to break the language and cultural barrier.

“Every day we are communicating in English, French and Japanese,” Suto offered. “French is the first language of our coach and Francis is teaching me.”

“Of course there is a bit of a language barrier,” admitted Boudreau-Audet, who hails from Saint-Jean-sur-Richelieu, Que., “but I am taking a Japanese course, so it helped a bit.” “He really understands Japanese culture, so I don’t find it difficult to communicate with him,” added his partner, who is from Yokohama.

In fact, since he turned from singles to pairs in 2013, Boudreau-Audet has been representing Japan in international events.

“The support I receive in Japan is amazing,” he said. “I cannot think of another country that gives so much support to their skaters. The fans are always cheering for you and they always wish the best for you. That’s one point that I really like about skating for Japan.”

While obtaining Japanese citizenship for Boudreau-Audet will be the largest barrier in order for the cross-country pair to compete at the Olympics, they don’t want to dwell on it too much.

“I don’t know what the future holds,” said Boudreau-Audet. “We will just wait and see what happens.”

In the meantime, the skaters were assigned a Grand Prix event –NHK Trophy– for the upcoming season in Sapporo, Japan, and are hoping they will also get an ISU Challenger event this fall.

“We want to focus on improving ourselves in the new season,” Suto stated. “We will work hard to get us to next level.”

“We will do it ‘pas à pas’ (‘step by step’ in French),” Boudreau-Audet concluded.