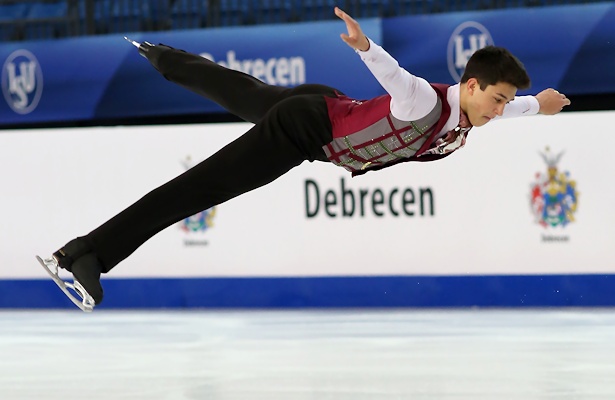 When Daniel Samohin won the World Junior title last March, it was not only the first ever medal at Junior Worlds for Israel, but also the first ISU Championship title for the country. It was a great moment for Samohin, his coach and father Igor, and the whole Israeli team.

Sitting in 9th place following a subpar short program, Samohin had nothing to lose. The 18-year-old nailed three quads (two toes and one Salchow) and one triple Axel to surge to first.

“I did it not only for me, but also for my parents and my brother,” he said. “I did it for Israel as well.”

Samohin is a powerful, flamboyant skater with huge jumps and he tries to sell his programs with story-telling themes as well as to entertain.

“Even when I was little, I was always very outgoing and tried to put on a show,” the World Junior Champion shared. “At the Junior Grand Prix Final (in December 2015) I didn’t skate very well, but I still remained in character. I don’t do that for myself, I just want that it is interesting for people to watch. I want to be different. It would be boring if everybody does the same.”

His father Igor agreed: “He told me ‘dad, I don’t want to do what everyone else does, I want that it is interesting’. This is great. Our sport is a bit of a show and people are coming to enjoy it and not just to see who is winning.”

Samohin junior takes part in choreographing his programs and likes to improvise a little bit during the performance.

“There are some small details, like I move my hands to the side and not up or I turn my head in a different way,” he explained. “When you are watching a movie for the first time, you don’t know what to expect, but the next time you already know what is where. But sometimes, when you are watching something for several times, you discover things you didn’t notice the first time, and I want people to see that, even if it is just small details.”

The athlete wants to continue working on his choreography and to skate “more grown up and beautifully” and also to improve the components score.

Samohin hails from a true skating family. His father is his coach, his mother is a choreographer, his older brother competed internationally for Russia and Israel, but took a break to heal injuries. Samohin’s parents emigrated from Russia to Israel in 1996, before Daniel was born, however, there is not much work for skating coaches in Israel and so Igor Samohin and the older son, Stanislav, who was ten years old at the time, moved to the USA.

There was not enough ice time. They even had to train on special roller skates that Igor Samohin designed himself. Little Daniel and his mother, a former rhythmic gymnast, stayed back in Israel until he was three and a half. Now the family lives in California.

Samohin never tires of figure skating, although the whole family is involved in the sport.

“We know how to distract ourselves,” the teenager said. “We know that there is not only the sport, but also the family and friends. At home we never always talk about skating. Sometimes you have to rest from the stress.”

Being coached by his father is not a problem for Samohin.

“Sometimes he needs to be strict and sometimes he has to support me,” he pointed out. “I think that we are working in a very positive way and it never happens that his strictness becomes negative.”

Igor Samohin, on the other hand, admits that it is sometimes hard to coach his own children.

“The older one, you can say, taught me what to say,” said his father. “You are always teaching your own children in a different way. When Danik was little, I saw his huge desire – he would say ‘dad, why don’t you coach me, why do you only coach Stasik?’ I understood. There is nothing I can do. He wants to skate and he will skate.”

And so he did. Daniel Samohin competed at the novice level in the USA, but then decided to represent his country of birth, Israel, when he was 15 and a half years old.

“They (United States) didn’t really support me and I decided to skate for Israel,” Samohin explained, adding that he got support from the Israeli Federation. “In America, I never knew if they would send me to a competition or not.”

The skater was nervous about switching countries at first. “I talked to my friends and they said, ‘no, don’t do it, it will be tough. This is a small country.’ But I made it, and my friend, who told me that said that he regrets his words.”

Now Samohin has set his eyes on new goals. He mastered the quad toe and Salchow and would like to add another quad to his repertoire.

“I learned the (quad) loop, but it is not consistent,” the Junior Grand Prix finalist admitted. “Maybe I will do the (quad) Lutz. I don’t want to content myself with what I have achieved. I will move forward. I want to make history in the future again, set records.”

Samohin is a very active young man. In addition to skating and attending high school, he wants to launch his own clothing line together with his brother and a friend.

“We thought of this company which is named ‘White Wolf, Black Wolf,'” he revealed. “We’ll do jackets, bags, trousers… not just sports clothing, but clothes you can wear everywhere. I want people to wear my clothes.”

“I understand that I won’t be a figure skater my whole life,” he said. “Of course, when I am older maybe I’ll perform in shows, but I don’t want to always do the same.”

Samohin, who was ranked 7th in his debut at the 2016 European Championships, will debut in the senior Grand Prix this fall and has been assigned to Skate Canada and to Cup of China.