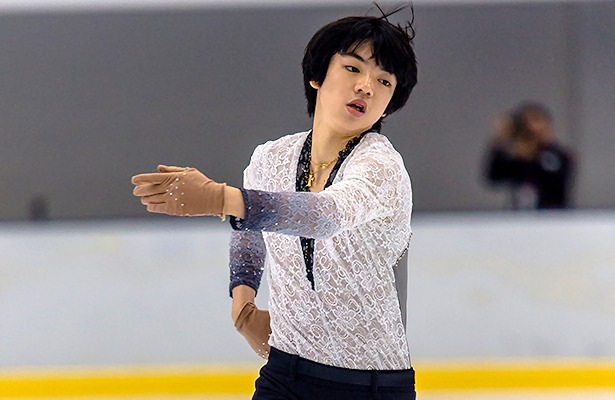 Cha made his JGP debut with a strong performance in the short program. Skating to the music from “A Chorus Line” soundtrack, his program featured a triple Lutz–triple toe combination, a solid triple Axel and high quality spins and footwork. As a result, he was rewarded with a new personal best score of 79.34 points, placing second in the segment after Vincent Zhou from the United States.

“My short program was okay,” the 14-year-old commented. “I made little mistakes, but I tried not to get nervous and just calm down. Maybe I could do better, but I am pretty satisfied.”
Regarding the music choice, the student of Brian Orser explained, “David Wilson chose the music for me. Last year I did “Danse Macabre,” a very serious piece. This year David wanted me to do something different, so we decided to use this musical.”

Based on the result of the draw for free skate, Cha was the last one to skate. He delivered a nearly clean program the following day. Skating to music of “Mi Mancherai” from “Il Postino,” the two-time Korean national bronze medalist beautifully landed a quadruple Salchow with 2.0 Grades of Execution and seven clean triple jumps.

Despite losing some levels on the spins, his virtually clean performance earned him 160.13 points, another personal best, and placed him first both in free skate segment and overall.

“I don’t feel any difference (compared to before winning the competition), but I am happy to win,” said the gold medalist. “I didn’t think of winning this competition, but I just wanted to perform my program well. I think the best part of my performance was the quad (Salchow), because it was my first time landing it cleanly in competition.”

His combined score of 239.47 points was not only the highest score on the JGP circuit this season so far, but also broke the junior men’s record previously set by Japan’s Shoma Uno, by 1.2 points.

“I was pretty surprised at my score,” Cha added. “After my performance, Brian said to me that I worked really hard, and it was a good job.”

The two-time Korean junior champion started to skate in 2009 when he was 8 years old. “One day I went to an ice rink for the first time,” Cha recalled. “I tried to skate a little bit, and I liked it, so I started to skate.”

The skater from Seoul had been training under Hae-sook Shin in his home town until March 2015 when he moved his training base to the Toronto Cricket Club in Canada where he began training under Brian Orser.

“I was looking for a good coach abroad,” Cha explained. “Before that, I had the chance to meet Brian and work with him. I really liked him and I wanted to be trained by him, so I decided to go to Toronto and started training there.”

The club also happened to be the training base of his favorite skaters. “My favorite skaters are Yuna Kim and Yuzu.” The 14-year-old finds the training environment in the Club, where world champions Yuzuru Hanyu and Javier Fernandez also train, very inspiring: “they are the top skaters of the world. When I skate with them, I find my jumps are very different from theirs. I want to learn from them and do much better.”

Cha will continue his JGP journey in Dresden, Germany, the first week of October, and aims to qualify for the JGP Final.