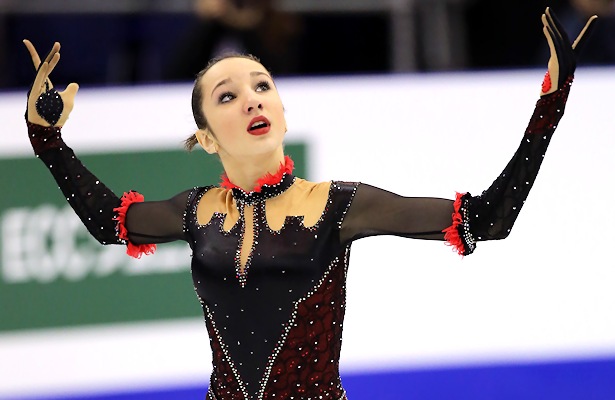 A year ago, Russia’s Polina Tsurskaya took the international junior scene by storm, winning each event she entered including the 2015-16 ISU Junior Grand Prix Final and the Youth Olympic Games. Unfortunately, bad luck struck at Junior Worlds when top favorite Tsurskaya fell during the morning practice before the Ladies short program. The fall further aggravated an injury to her ankle that was sustained the day before she left for Junior Worlds. As a result, the skater had to withdraw.

The season was over for the teenager who moved from Moscow to Omsk when she was 11 in order to pursue a career in figure skating. The recovery took a long time. For three months, Tsurskaya, who turned 15 in July, was off the ice. Eventually the Youth Olympic champion recovered, however, her coach, Eteri Tutberidze, did not let her skate at the junior test skates in early August.

“A skater of the level of Tsurskaya cannot show average skating,” explained Tutberidze. “She should go out and compete for the top spots.”

Tsurskaya is currently scheduled to compete next week at the Junior Grand Prix event in Saransk, Russia, as well as the event in Tallinn, Estonia, two weeks later. The 2016 Russian junior national champion hopes to regain her leading position in the junior ranks this season.

Choreographer Daniil Gleikhengauz created two new programs for the 15-year-old. The short program is set to “Light of the Seven” from the “Games of Thrones” soundtrack, but the storyline of the program has nothing to do with the epic fantasy as Tutberidze pointed out. The story is about an artist who is never satisfied with her work until she starts to draw on her own body.

“The result is so dazzling that with the words, ‘I experienced perfection’, she destroys her work,” the coach explained.

“I’m looking around and I might see something and I draw it myself,” she said. “I draw everything. I usually draw people or animals from cartoons for example.”

The free skate is to the lyrical piece “February” by Leonid Levashkevich, and has a less extravagant theme. It is simply about love.

Tsurskaya is a tall and powerful skater. She grew over the summer and is now 172 cm (nearly 68 inches).

“She is very tall, but she copes well with it,” Tutberidze noted. “We somehow grew used to thinking that girls should not be tall, but when Polina comes out, she is powerful and jumps boldly at high speed, like a man. It looks serious. It is impressive when you cover the ice with one step. Polina has huge jumps.”

Tsurskaya’s high jumps were the first thing Tutberidze noticed about the girl that came from Omsk before taking her into her group.

“I started skating when I was four, and when I was 11 we realized that in order to achieve high level success, I needed to move to Moscow,” Tsurskaya recalled. “At first I lived only with my dad for half a year (in Moscow) and my mother lived in Omsk. Then my mother also moved and now we’re all living together.”

However, her older brother Igor, now 24, grandparents, other relatives and friends stayed back in Siberia. “I miss them a lot,” the skater admitted.

Nevertheless, the move paid off. Soon after training under professional conditions in Tutberidze’s group, Tsurskaya drew attention. This was also the point when she realized that figure skating was her calling.

“In the first season since we moved, I started having good results and I realized that I can achieve more,” the teenager said. “Figure skating is my job now, but a job that I enjoy doing. It is very interesting to travel to different countries, to compete, to realize where you are stronger and where you are weaker than your competitors and what you need to work on and when you are already at a good level.”

Even specialists from other sports were quick to recognize Tsurskaya’s qualities. Athletic coaches watched the skater running on the track during off-ice training and asked her to try pole vault.

“They know their material, but maybe we can work even better with this material,” said Tutberidze.

However, Tsurskaya was not interested in switching to athletics.

“Figure skating is still like an art,” she said. “Of course, it is a sport, but it is also an art. We don’t have seconds and meters.”

“Polina has talent for dance and she really listens to the music,” Tutberidze said. “She is beautiful, you can show her off and she is shapely.”

More than that, Tsurskaya is also fearless and bold, especially on the ice.

“I am very good-natured, but very shy,” confessed the skater, who would like to challenge the triple Axel or quad in the future. “On the ice I already feel more confident. It is my familiar sphere.”