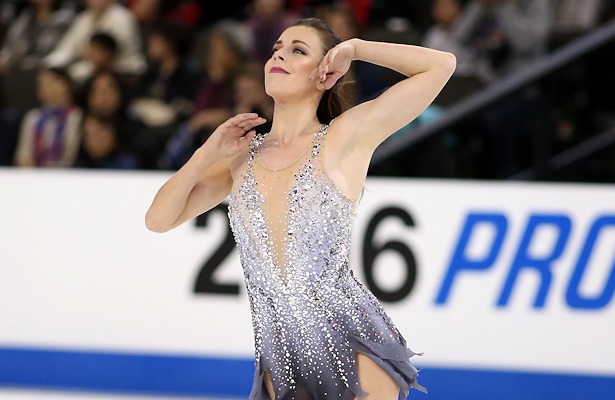 USA’s Ashley Wagner harnessed the momentum of last season’s world silver medal to win a second Skate America title in Chicago, Ill., on Sat night. with her soulful and angst-filled performance to “Exogenisis” by Muse.

The American landed four triples, but opted not to tack on the triple Salchow in her planned triple loop-triple Salchow sequence. Two of her triples were downgraded, however, she scored 126.94 in the long program to finish with a total of 196.44.

“Today was a little sticky, but at the end of the day, I got the job done,” said the relieved champion who last won this event in 2012. “It felt more like a complete program and I think that’s definitely what pulled me through today.”

Looking forward to her next event, the Cup of China, and the need to regain her levels on her spins which evaded her in Chicago, Wagner said, “My job is pretty easy. I just have to keep on working hard.”

Flanking Wagner on the podium were two youngsters: Teammate Mariah Bell and Mai Mihara of Japan.

In an elegant cream dress, Bell skated to East of Eden with grace. She managed six triple jumps including a triple Lutz-triple toe loop combination and a second triple Lutz from a back spiral position. Bell placed first in the free skate with a personal best score of 130.67 and finished with a total of 191.59 to claim the silver medal.

“I’m very, very proud of my performance today,” said Bell, beaming. “My goal this season was just to continue on my personal best.”

The performance earned the 17-year-old 123.53 from the judges for a total competition score of 189.28 and the bronze medal.

“I definitely feel a lot of regret,” Mihara said of her skate to Cinderella. “I found a lot of homework before my next competition. I am surprised with the result here; it was unexpected, but I would like to take this confidence level into the next competition.”

The silver- and bronze-medal finishes were made possible by the difficult skates of their respective countrywomen: USA’s Gracie Gold and Japan’s Mao Asada.

USA’s Gracie Gold lacked her usual sparkle in a program set to Maurice Ravel’s “Daphnis and Chloe,” falling on both a triple flip and triple loop, as well as doubling her planned triple flip. The two-time US national champion still managed a glorious double Axel-triple toe-double toe midway through the program and a soaring triple Lutz from a back spiral position later. She finished in fifth place (184.22).

“The score was overly generous, but I appreciate what I was able to pull out I guess,” said the 21-year-old immediately following her skate. “The only thing left to do is to continue training. We just need to adjust my physical and mental shape and see if the program can be salvaged for the rest of the year. I have all the support I need; I just have to rely on it more.”

Though dressed in vibrant crimson red, Japan’s Mao Asada was a dim version of her usual dynamic self in the free program composed by Manuel de Falla. The three-time World champion started out strongly with a double Axel, triple flip-double toe, however, she underrotated the triple Lutz and popped the planned double Axel-triple toe loop combination.

More problems snowballed from that point from the usually-composed Olympic silver medalist. She fell out of the triple Salchow and doubled her planned triple flip. In the end, the judges awarded Asada with a low 112.31 in the long program for a total combined score of 176.78.

Canada’s Gabrielle Daleman finished in fourth place in both the short and long program, and with a total score of 186.63, finished fourth overall in the competition.

Skating to “Sweet Dreams (Are Made of This)” by the Eurythmics, Wagner soared to the top of the rankings in the short program, which can sometimes be a nightmare for the three-time national champion. Though half a point shy of 70, the American’s score was sufficient on a night of falls and flubs.

The warrior Wagner described how she channeled her fighting spirit in executing the attitude-filled routine which featured two clean triples and lots of high Grades of Execution (GOE). Her only mistake was an under-rotated triple toe on the back end of a triple flip.

“That program is totally about just like this strong, tough – the word I want to use I’m not allowed to use … you guys know what I mean – this tough woman,” said the 25-year-old.
Sporting an asymmetrical black and blue dress, the costume choice was a departure for the Olympian who has opted for simpler, sleeveless choices in recent seasons.

You can’t skate to “Sweet Dreams” and not go all out,” Wagner said of the dress by Lisa McKinnon. “I wanted it to have this super 80s rock-punk type of a vibe. She made my dress come true. My shoulder pad even had spikes in it so I can take someone out.”

Mihara was second in her Grand Prix series debut. “I did a solid job,” she said of her 65.75-scoring short program to “Rondo Capriccioso” by Camille Saint-Saens. “I did what I could have done.” The 2016 Nebelhorn champion managed a triple Lutz-triple toe combination and a double Axel, but crumbled in the landing of her final element: the triple flip.

Gold skated her edgy tango from the “Mr. and Mrs. Smith” soundtrack with ferocity, opening with her sublime triple Lutz-triple toe combination. Later in the program, however, she fell on the triple flip out of footwork to earn a third-place score of 64.87.

“Going down on the flip was unfortunate, but there was nothing chicken about it. I really went after it,” she said.

The two-time US national champion shared her difficulty in the off-season following the World Championships in Boston. A clean short program and personal best score had the skater in first place entering the long program, which included two errors, and dropped the skater from the podium, forcing her to watch as her teammate, Wagner, surged to second

“It was really, really hard for me,” Gold said of her summer. “I had trouble really getting going and getting my feet under me. I felt like I let myself down, and no one else felt the intense shame I did. As soon as I got the momentum going, I have been feeling really excellent.”

Skating to Artur Rubinstein’s “Ritual Fire Dance,” Asada skated with panache and intricate transitions, although she attempted only a double Axel and a triple-double combination given a nagging knee injury.

“It’s not the best program I can do, but with my condition right now, I am happy with that,” said the six-time Japanese national champion.
The skater finished fifth with 64.47.

The 26-year-old insists the exclusion of the triple Axel in the short program is not a long-term decision.

“I do think I need a triple Axel at Worlds as well as a triple-triple combination,” she said.