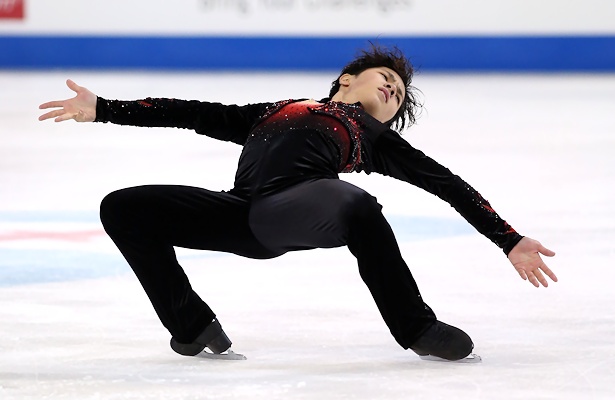 Bursting with panache, Uno performed a tango for the long program with conviction to music by Astor Piazolla. His routine featured three solid quadruples – the flip and two toe loops, one in combination with a double toe loop. The only mistakes were an under-rotated triple Axel and a fall on a planned triple Axel-loop-triple Salchow jump sequence.

The judges awarded him with a near-personal best free skate score of 190.19 and total competition score of 279.34.

“It is quite different from what I have performed in the past,” said the 2015 World Junior champion. “I tried to start with what tango is really like. In the beginning, I wasn’t so sure I would be able to pull this out, but the music just started to grow inside of me and I started to enjoy expressing this type of music. I just tried to express what fit my skating to the music.”

Brown performed to music from The Piano soundtrack with his signature unrivaled musicality to finish second overall. The 2015 US National champion wove in eight triple jumps while interpreting his character of the movie through his body movement and expression.

The most poignant moment came in the first element of the routine when the 2016 US Classic champion stood up on his first quadruple toe loop in competition. Though underrotated, the execution was a welcome departure from the falls that became routine in the past. He received a score of 182.36 in the freeskate for a total score of 268.38.

“It was kind of one of those ‘dazy’ moments where I was so focused and I so like ‘I’m going to attack and I’m going to fight for this’ and I went up for it and felt good and suddenly was on one foot,” the 21-year-old said of the jumping pass. “It’s not like I had to fight for the landing or was trying to save the jump, it was just ‘Oh my gosh, just like what I’ve been practicing!'”

Brown’s coach, Kori Ade, took an atypical approach to prepare her pupil during the final moments of the warm up by instructing Brown to envision his performance.

“I have been telling Jason this whole week that he is in a developmental phase and I didn’t want him to get too wrapped up in needing to be perfect or feeling like this somehow was the end of the chapter,” she said of the motivation for the visualization exercise. “I wanted him to really understand that this is the beginning of a chapter and that developmentally, doing the quad and being able to maintain the integrity of the rest of the program is really important. So just giving him the opportunity to stop for a minute and say regardless of what happens, there will be a victory this week based on whatever we deem that victory to have been.”

Skating to “Arrival of the Birds,” 2016 US National Champion Adam Rippon fell on his opening quadruple toe, but performed the remainder of his program with meticulous precision, checking off each triple jump woven together by choreography enhanced by bird-inspired movements and expression. The bronze-medal finish was particularly satisfying given his program is only weeks old. Following the Japan Open, Rippon scrapped his previous routine set to “Bloodstream” by Stateless given his new short program, which had been a show number previously, felt more comfortable. The judges awarded Rippon with a score of 174.11 and a total score of 261.43.

“When I’m home, Rafael (Arutyunyan) is a big stickler for me being very sharp with this program and having all the starts and stops be very sharp,” said the veteran skater. “He’s also really pushing me to skate a lot faster, so that’s what I really focus on when I’m at home; just more of the technical aspect of the program. Because I drill that all while I’m home, when I’m here, I can portray the story of the bird, and the movements are still sharp and I don’t have to think about it; it’s more muscle memory. When I’m at the competition, it’s really a time for me to kind of celebrate all the training I have done and enjoy myself.”

Russian Sergei Voronov was fourth overall with a strong free skate featuring a quadruple toe and seven triples. He scored 166.60 with a fifth place finish in the long program for a total competition score of 245.28.

Reigning world bronze medalist, Boyang Jin of China rallied back from a disastrous short program to finish in fifth place overall with a free skate score of 172.15 and total score of 245.08. Set to An American in Paris, the skater’s program featured playful and expressive choreography at moments throughout; a marked improvement over his musicality last season. He banged out three clean quadruple jumps, the first being a soaring quadruple Lutz.

Canada’s Nam Nguyen gave a clean performance which featured a quad Salchow and seven triple jumps. He finished seventh in the long (159.64) and sixth overall (239.26).

Uno showed why he’s a world contender with his lyrical, but power-packed short program set to “Fantasy for Violin and Orchestra” from the Ladies in Lavender soundtrack. The two-time Japanese national silver medalist opened with his quadruple flip jump, but later fell at the end of his quadruple toe loop-triple toe loop when his edge slipped from beneath him. He recovered to squeak out a triple Axel after a glorious catch-foot camel spin and earned 89.15 from the judges.

“I think my skate went very well,” said the 18-year-old. “The triple Axel in terms of the quality, I have some things I need to remind myself and reflect upon. In other words, I have some challenges, but at the same time, I cleared some of my homework as well.”

Rippon skated last of the men in the short program with ample sass in his performance to “Let Me Think About It.” He landed the triple flip-triple toe combination, then a steady triple Axel and later a picture-perfect signature triple Lutz with his arms above his head. He scored 87.32 to place second to Uno.

“It’s always so exiting to skate at home and skate well and have the audience on their feet,” said the 26-year-old.

Rippon also took advantage of the newly-relaxed ISU costuming rules and wore a tank top. “I am a trend setter,” he said. “I want to stand out.” And yet the competitor says the decision comes with additional pressure. “I have been told to be fearless and makes choices that not everyone would make. Skating to a club song in a tank top, I have to be really good or it would just be a joke.”

Brown skated his Sam Smith “Writing’s On the Wall” routine with his quintessential musicality to finish third (85.75). Though he crashed in his opening quadruple toe, the skater went on to land the triple Axel and triple Lutz-triple toe combination. The program showcased his lines and included dramatic split jump highlights. The 2015 US National champion’s second error came on a botched spin transition which resulted in no value being given for the element.

“As a performance, I am super, super excited with my skate,” he said. “I think it was one of the best performed short programs of the season. The technical side, it wasn’t one of my strongest skates. I am especially disappointed in missing a spin because that’s not like me. I am excited that my quad was clean, but I am still determined to land one in competition.”

In his first grand prix series event under the tutelage of coach David Glynn in California, Nguyen was ecstatic with his light-hearted performance to “Love Me or Love Me” by Sammy Davis Jr. The 2015 Canadian champion opened with a quadruple Salchow-triple toe and followed the trick with a clean triple Axel and triple Lutz. He scored 79.62 for fourth place.

“It feels really good to put out a solid performance and I’m really pleased with myself,” said the 18-year-old; a juxtaposition with the crestfallen skater of last season. “It’s to trust myself, be relaxed and just to have fun,” he said of this week’s priorities.

The big surprise of the short program came with Jin’s fall-filled performance. Crashes on his quadruples and a step out on the triple Axel landing during his Spiderman routine left the Chinese skater in eighth place with a score of 72.93.