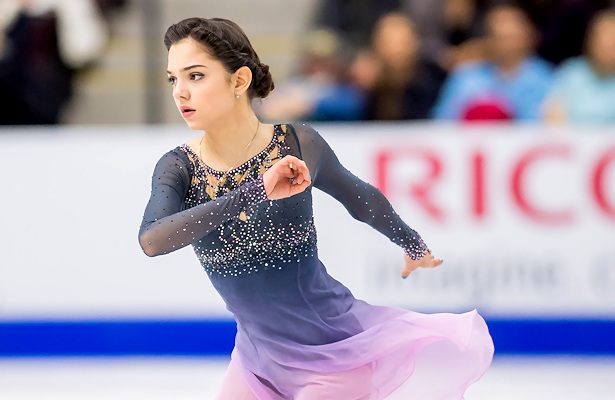 World champion Evgenia Medvedeva bucked the one-season wonder trend that has become so prevalent in Russian ladies’ figure skating since the 2014 Olympic Games. The 16-year-old won gold today at Skate Canada with another gargantuan score of 144.41 for a total competition score of 220.65.

Medvedeva opened her routine with an exuberant triple flip-triple toe combination holding one arm aloft in the air on the flip. Her only major error came on an under-rotated double Axel, but the skater otherwise landed a total of seven triple jumps and earned level fours on both her steps and spins.

“I think it isn’t okay and I will work harder, but I am so happy because I am first today,” said the free skate record holder.

The program, set to the soundtrack of Extremely Loud and Incredibly Close, has profound meaning to the teenager from Moscow. “You need to cherish and appreciate each moment with the people you love,” she said.

In her first competitive program set to opera, Canadian Kaetlyn Osmond appeared to channel the spirit of both of La Boheme’s leading ladies – Musetta’s ferocity and Mimi’s softness – to snare the silver medal.

The two-time Canadian champion landed five triple jumps, including a soaring triple flip-triple toe combination, to score 132.12 (a personal best) to finish the competition with 206.45. Her only glaring error was a fall on her underrated triple loop jump. The skater was thrilled with her appearance this year; a stark contrast to last year’s eleventh-place finish after a fall-filled long program.

“Compared to last year, I am beyond excited to be where I am right now,” she said. “Even more so, I’m excited by the fact that I did make two personal best scores this weekend and there is still a lot of room for improvement in my programs. So, I am super happy that I was able to compete at this level this early in the season.”

Japan’s Satoko Miyahara won the bronze medal with a program that appeared clean, however was marred by under-rotations and an edge uncertainty. Her step sequence received no value due to ice coverage. She received 126.84 points for the effort for a total of 192.08.

The finish and scores are unsettling for a skater who seemed to have unlimited momentum during the 2015-16 season which included a national title, a Four Continents championship, and a Grand Prix Final silver medal.

“In practice I am getting better at jumps, but when I get nervous, I think too seriously,” she explained. “My jumps get worse, so that’s what I have to work on.

The routine, set to Star Wars and The Planets, exuded an intensity and exuberance for which Miyahara is known. “I perform joy and happiness against the war and bad things,” she the two-time Japanese national champion. “I always try to perform as a strong woman and I think to bring a smile.”

Russia’s Elizaveta Tuktamysheva, who stood in third after the short, finished fifth (121.20) in the long and fourth overall (187.99).

Medvedeva picked up right where she left off last season: finishing in first place with personal best scores. She achieved 76.24 points with a charming routine that chronicled the journey of girlhood to womanhood. Her late-placed jump combination was a galloping triple flip with her arm above her head followed by a secure triple loop. The footwork sequence and all three spins were graded level four by the judges.

“My short program corresponds with my current situation because it is about growing up,” she said through a translator. “From being a child to becoming an adult. When a person grows older and gets more experience, they see that not everything is so easy and the view of the world is changing. With each day, I get more experience and that’s very good.”

Osmond was oozing chutzpah in her Edith Piaf routine which featured a glorious triple flip-triple toe loop combination. The solid program earned 74.33 points from the judges; a ten-point improvement from her finish at the 2013 world championships.

“To finally be able to get a personal best, it means so much to me,” said the second-place finisher, who picked up all level four elements on the footwork and spins. “It’s going to add confidence, but I don’t want it to get over my head.”

Previously plagued by injuries, Osmond says she is healthy now and has benefitted from the longest period of training injury-free. The 2016 Finlandia Trophy champion credits her music for the meticulous performance. “I definitely felt super calm and confident and just that program makes me happy every single time I do it,” she said.

Long-time Coach Ravi Walia credits the playful pace of the program for her clean performance. “It’s definitely really comfortable for her and it comes most naturally for her,” he said, in comparison to last year’s melodic short program. “This program is more her true personality.”

Tuktamysheva skated a clean, yet rather unanimated short program to Mozart’s “Piano Concerto No. 23.” Crisp triple jumps, including a triple toe-triple toe combination demonstrated the Russian’s impressive technique and helped to earn a score of 66.79.

“I am really happy that I skated clean in my program because I was nervous before the competition,” the 19-year-old confessed. “Now I can grow on this in the future.”

Hongo was fourth after the short program with a clean skate featuring a triple toe-triple toe combination at the half way point. She scored 65.24.

Surprisingly, Miyahara was fifth place after the short program. Her score of 65.24 was the result of an edge call on her triple flip and an underrotated triple toe on the back end of a triple Lutz combination.