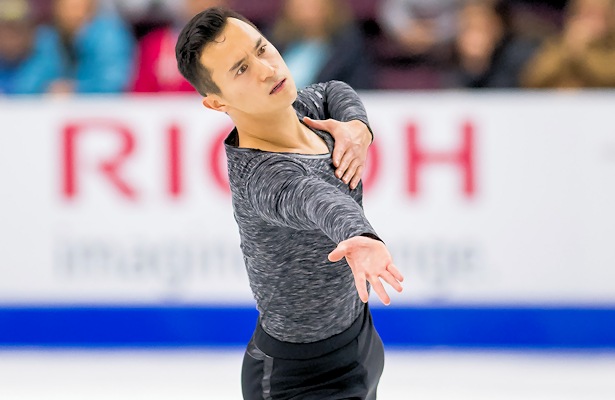 Canadian Patrick Chan repeated as Skate Canada champion with a long program, which despite some problems – including two doubled jumps – featured his first attempt at the quadruple Salchow. Despite falling on the trick, he scored 176.39 in the free skate for a total competition score of 266.95.

The program was layered with soulful choreography and emotive transitions to music entitled “A Journey,” composed by friend and pairs skater, Eric Radford.

“I’m happy,” said the 2014 Olympic silver medalist. “My goal was to at least rotate the quad Sal no matter how I felt going into it. Maybe I didn’t plan on being as tired. That one challenge when you’re adding another quad is just experiencing the extra fatigue. So, I started dying a little bit…the legs started getting heavier at the end of the program, but it’s a good start to the season.”

Chan chose not to shy away from the additional quadruple which he says he will need later in the season to compete against the world’s best.

“In practice, it depends on the day,” the 25-year-old said, regarding his consistency on the quadruple Salchow. “Some days it’s, I would say, seven out of ten. We try and limit how many we do. I always want to do more and more and more but [coach] Marina [Zoueva] is very aware that I need to be careful for my body health-wise.”

“Today, maybe it’s just the anticipation of doing the quad Sal and doing it in practice,” explained the eight-time Canadian national champion of the fall. “I wanted to do it even more. Your breathing changes, your heat rate starts getting higher…so all those little things add up to being a little more tired at the end. But it’s good. You got to do it, you got to try it and experience it, then you can move forward and try it the next time.”

In a storyline repeat of the 2015 Skate Canada International, 2014 Olympic Champion Yuzuru Hanyu rallied back from a poor short program to clench the silver medal. The record holder in the short and long program scores performed to “Hope and Legacy” by Jo Hisaishi and managed two smooth quadruples and two triple Axels to score 183.41 for a winning free skate and a total score of 263.06.

“I was a little nervous and I didn’t have confidence for the quadruple loop,” he said, regarding his opening quad loop he fell on and insisted that the element will remain in his program. “I feel a little regret for that and my performance.”

“I am a little satisfied for my second toe,” the four-time Japanese national champion added, referring to the silver-lining quadruple toe loop achievement late in the program.

Kevin Reynolds managed an impressive comeback after a hip injury which has effectively side-lined him from competition since the Sochi Olympics. That glory, helping Canada win silver in the team event, has seemed a lifetime away given the 2013 Four Continents champion’s struggles to return to his elite form. Stepping onto the Skate Canada podium with a bronze medal, thanks to his free skate score 164.49 and total competition score of 245.06, was a long-due treat. The lithe skater landed three quadruple jumps and a triple Axel in his program to the soundtrack of Grand Piano.

“It feels incredible,” said the 26-year-old, reflecting on his recent journey. “I feel like I can challenge the best in the world.”

“To do improved performances in just three weeks’ time gives me lots of confidence,” he added, referring to his silver-medal finish at Ondrej Nepela Trophy earlier this month.

“It feels really good,” said long-time coach Joanne McLeod of Reynolds’ finish. “It reminds me of 2013 when he was on top of the world and when we were trying to ride that momentum.”

Michal Brezina of the Czech Republic catapulted from ninth to fourth overall with a free skate score of 157.06 (227.42), while Israel’s Daniel Samohin placed fifth (226.53).

Takahito Mura of Japan plummeted from second to eighth place overall (222.13) after an error-filled free skate (140.89).

Chan resumed his place as the leader after the Skate Canada men’s short program. A clean quadruple toe-triple toe kick-started his program set to “Dear Prudence” and “Blackbird” by The Beatles, a reworked exhibition program. However, a fall on the triple Axel thwarted the prospect of setting a new personal best score. The judges awarded him 90.56 points.

Comparing his short program theme this year to last season’s, which despite its zip, gave him challenges, Chan thinks the choice of a more relaxed and carefree theme was strategic, even if subconscious.

“Being an exhibition program, when it comes to doing shows, you have an attitude of just confidence and yet relaxed and you really enjoy every note of the music,” he explained. “Whereas sometimes competitive programs, you just think of the elements and cut out the music. I can’t help but enjoy the piece. It’s Beatles. I thought it was a great avenue.”

Flanked by his new coaches – Marina Zueva “the overseer” and Oleg Epstein “the technician” per Chan – it was the first major competitive glimpse of Chan without former coach of five years, Kathy Johnson.

In second with 81.24 points, Mura stepped out of his opening quadruple toe loop but rallied to land a solid triple Axel and triple Lutz-triple toe combination during his flamenco routine. Despite the fight, the 2014 Four Continents Champion did not impress the judges with his other elements and received a level two grading for the step sequence, flying sit spin and change-foot sit spin.

“This was one of the worst short programs I’ve done recently,” said the 25-year-old. “As far as the spins and the steps are concerned, the levels were very low (level two). I’m quite mad at myself about the short program.”

Canadian favorite Reynolds attempted two quadruples in his Finnish folk program, but underrotated the opening Salchow in his combination. The 2013 Four Continents Champion was ranked third with 80.57 points.

“I was researching all sorts of music in the off season and came across this piece of music and it was a Finnish composer,” he said of the program. “It’s a compilation of Finnish folk music and it’s a perfect choice with the world championships being in Helsinki.”

In a disastrous short program, Hanyu finished fourth with 79.65 points. The skater opened up early on his quadruple loop attempt and tripled the Salchow with a pitched landing, however, his triple Axel, spins, and footwork during the Prince number were impressive.