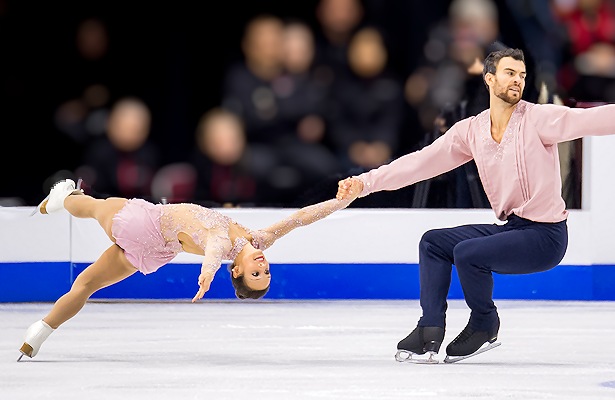 Duhamel said she thought the performance was a solid start to the season, particularly after their personal best scoring short program.

“We have always found it difficult after a really strong short,” said Radford of the team’s ability to stay calm and focused. “I think we did a really good job here at Skate Canada. I think we managed to keep ourselves in a relatively nice comfort zone.”

“Comes with the game,” Duhamel said of the unusual fall on the throw jump, which left her momentarily worried if they would continue before adrenaline kicked in. “We already made a mistake and I wasn’t going to make another. You take the risks and you take the falls sometimes. I think we over rotated it if it’s possible to over rotate a quad. We overcooked it a little bit.”

The newly-formed Chinese team of Xiaoyu Yu and Hao Zhang skated a delicate performance to “Cavatina” and “Larghetto amoroso,” which included clean side-by-side jumps and a throw triple loop and Salchow. They scored 132.65 for a total competition score of 202.08 to win the silver medal.

“Both of us are proud of our free program,” said Zhang. “It was good technically and also a good performance; we are happy about that. This is our first competition and we have a silver medal. It’s a little bit surprising for me.”

The team says they have no immediate plans this season of practicing quadruple throw jumps or twists or performing them in competition.

Winning the bronze was the popular team of Liubov Ilyushechkina and Dylan Moscovitch, who represent Canada. Despite several errors throughout the program, the team was able to manage a clean throw triple loop and showed dynamic chemistry during their free skate to “When you Say you Love Me” by Josh Groban.

“Today was work for us,” said Moscovitch. “It was not an ideal run through. It was not how we have been training or how we pictured today going, but we stuck to our training. We kept refocusing throughout the program. The fact that we were able to do that…we were able to keep the integrity of the program up and get ourselves on the podium, so we’re happy about that.”

After their silver at Skate America and the Grand Prix Final qualification buzz that came with the medal, Americans Haven Denney and Brandon Frazier were nudged off the podium despite their enchanting performance to “Somewhere in Time.” Dressed in vibrant blue, the team won 121.73 in the free skate for a total competition score of 188.23. Errors on the side by side jumps were compensated by strong throw triple jumps and a level three twist.

“There was a good lesson to learn from this one,” said Frazier. “No matter how we’re feeling, we are able to still put out a positive performance and that’s important in pairs, especially for the long program.”

“I think after being off for so long, I have a different appreciation for being able to compete again and I hope my joy, my love for what we’re doing is showing,” Denney said of her exuberant joy throughout the program.

Two-time world champions Duhamel and Radford landed their first throw triple Axel in a short program marred only by Duhamel’s free leg sweeping across the ice upon the landing. The techno routine set to Seal’s “Killer” played a perfect backdrop to what Duhamel calls the team’s “unique, innovative” movements which help distinguish them from the competition. Apart from the throw jump, Radford had a squirrely landing on his side-by-side triple Lutz. The team was awarded a score of 78.39.

“The mission was to come here and nail a good short program and start the season off by not only showing ourselves, but also showing the world that we’re not backing down,” said Duhamel. “We are still improving; we are still pushing ourselves.”

Frustrated by the inability to attempt a quadruple in the short program last season, the five-time Canadian champions decided to chase a triple Axel to boost their base value this season. A clean short program at last year’s world championships still left Duhamel and Radford behind the Chinese team of Wenjing Sui and Cong Han.

Though the Montreal-based coaching team was originally non-committal about the high-risk throw continuing all season long, their tune changed moments after the short program.
“This thing is not going anywhere,” said coach Bruno Marcotte. “The percentage of success at home is over 80 percent.”

Following the team’s showing earlier this month at Finlandia Trophy, in what Duhamel described as “disastrous,” the team regrouped and tweaked the program. With a change in the element order that places the throw jump attempt sooner in the program and a tighter, faster entrance pattern, Marcotte says Duhamel feels more confident about the trick nowadays.

Yu and Zhang were second after a clean skate, which was punctuated by a soaring level four triple twist, that snared 69.43 from the judges.

“It looks great to me,” said Yu of the performance to “Eternal Flame,” built on a mere five months of training. “However there is room to improve; in particular, the quality of elements and artistic performance.”

This is the first international competition for the team who were part of an intriguing teammate partner swap when Zhang left his former partner Cheng Peng and Yu left Yang Jin. Peng and Jin now skate together. Zhang said the duo was formed when coach Hongbo Zhao first tabled the idea following the last world figure skating championships.

Ilyushechkina and Moscovitch were third with a score of 67.53 after their passionate “Tango Jalousie” routine. Their only error came on the side-by-side Salchows which Moscovitch botched with a hand down and Ilyushechkina doubled. The duo – one of three pair teams in Canada clamoring to break out from Duhamel and Radford’s vast shadow – admitted that the win by teammates Julianne Seguin and Charlie Bilodeau at Skate America last weekend fired them up and influenced the third-place skate.

“I would be lying if I said I didn’t notice and that it doesn’t cross my mind,” Moscovitch said of his compatriots’ success. “We’re both very competitive people. They’re very impressive; they did a fantastic job and they are a very consistent team. They are a team to watch and we can play off that and ride that momentum as well.”

Denney and Frazier were fourth after the short program in which Frazier two-footed and stepped out of the landing of the side-by-side triple Salchow.

“Doing that in competition is not something to be proud of,” he said afterwards. “It wasn’t a good take off. I tried to think positive and know that a couple seasons ago I would have popped it and whatnot, but I’m starting to be more consistent on just getting the job done.”