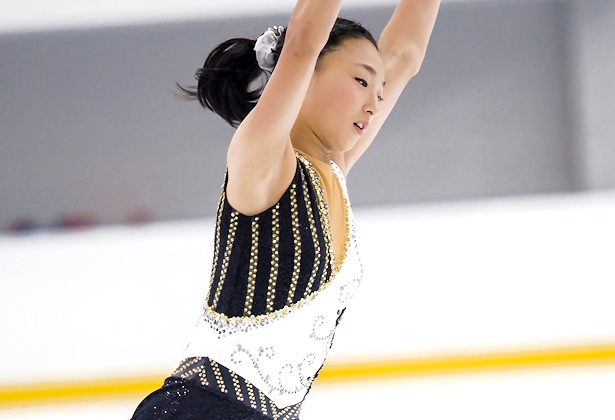 Before the 2016-17 figure skating season began, Kaori Sakamoto of Japan set her first goal of the season: “to build a body free from injury.” The previous season, she suffered a stress fracture on the right shinbone which prevented her from doing any on-ice training in October and practicing jumps in November. The injury eventually led to a not very self-satisfying season.

“During the off-season, I worked really hard in order to catch up while paying attention to my body to not get injured,” the 16-year-old recalled. “I’ve gained body strength through training, both on-ice and off-ice, and improved my stamina by doing run-throughs even when I felt tired.”

“Even though it was still off-season, I was training like I was competing,” she continued, adding that her second goal of the season is to make every podium.

Thus far, the student of Sonoko Nakano and Mitsuko Graham has been on track to achieve her goals. During the last week of August, Sakamoto competed at her first competition of the season, the Junior Grand Prix (JGP) event in Saint-Gervais, France, and won a silver medal. While her short program was solid, the skater made several errors on her jumps in the free skate. She placed second behind Russia’s Alina Zagitova with 178.86 points.

Two weeks later, the skater from Kobe continued her JGP journey in Yokohama, Japan. Surrounded by her home crowd, Sakamoto pulled off two strong performances, refreshed her personal best in both the short program and free skate, and won the competition by a combined score of 187.81 points.

When her placement was announced, the teenager couldn’t contain her happiness and tears in the Kiss & Cry.

“I was thinking, ‘oh, this is how victory feels!'” Sakamoto shared. “I always got second place, like the previous JGP event, like JGP last season, and the junior nationals two years ago… all second. It has been a really long time since I last won a competition, so I felt really, really happy winning there.”

The skater was also content with the way she skated. “My short program is ‘the Artist’, a light-hearted piece which I think really fits my style. I felt glad that I was able to entertain the audience through my performance.”

Sakamoto kept her free skate, choreographed by Massimo Scali, from last season. Together they enriched the footwork and polished the overall program.

“I felt really tired towards the end and I want to be more refined,” explained the skater, who trains at the Hyōgo Prefecture. “I need to work harder.”

The 2016 JGP Yokohama champion felt she had learned a lot from this competition.

“I think my mentality really got stronger through this experience,” she commented. “Placing first after the short program made me really nervous. My competitors’ high scores before my free skate made me even more nervous, but my coach calmed me down and encouraged me. I learned to focus on myself only and not be affected by circumstance. As a result, I skated my free program well.”

Sakamoto is also inspired by her peers. “Everyone trains really hard and demonstrates much attack in their skating. I’ve learned that if I stay conservative and don’t show attack, I can’t achieve a good result.”

“Russian skaters are so strong and competition in Japan is fierce too,” the 2014-15 Japanese junior national silver medalist observed. “I am sure the JGP Final will be a very high-level competition, and I want to reflect my learning through this experience and prepare well for it.”

On October 8 and 9, Sakamoto matched up with her fellow JGP Finalists Rika Kihira and Marin Honda in the Kinki regional junior championships. After a good short program, the Kobe native made a few mistakes, including popping a final jump in the free skate. As a result, she brought home a bronze medal with a combined score of 181.19. Kihira won overall, and Honda placed second.

“I still felt exhausted at the end of the program,” admitted the bronze medalist. “I really need to improve my stamina by doing both on-ice and off-ice trainings. This is not only for the jumps, but also to ensure I can execute the spins and footwork well.”

“My goal is to medal at every competition this season,” Sakamoto summed up. “The bar is getting higher and higher, and I hope to learn from the experience of these past competitions and perform better in the JGP Final.”