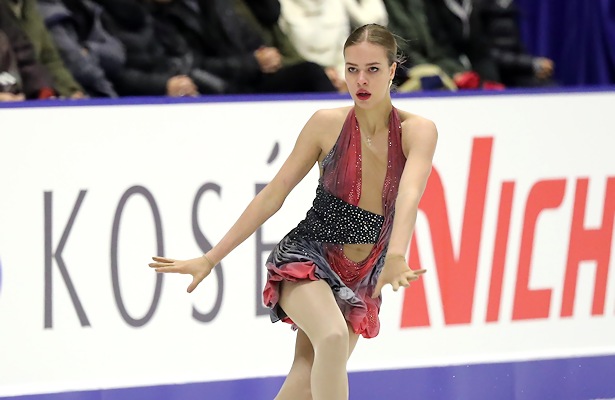 Anna Pogorilaya of Russia continued her successful season with a second Grand Prix gold medal at 2016 NHK Trophy in Sapporo, Japan, on Saturday. Japan’s Satoko Miyahara came from third place to capture the silver medal, while Russia’s Maria Sotskova settled for the bronze. All three skaters earned a berth for the 2016-17 ISU Grand Prix of Figure Skating Final next month in Marseille, France.

Pogorilaya looked strong on both days of competition. The Muscovite led after her expressive Tango short, however, the triple Lutz-triple toe was called underrotated. In the long to “The Modigliani Suite” and “Memorial,” the two-time European bronze medalist nailed seven clean triples, including a triple Lutz-triple toe, triple Lutz-single loop-triple Salchow combination, but she stumbled on the last jump, a double Axel. The 2016 World bronze medalist stayed on top with 210.86 points and followed up on her win from Rostelecom Cup earlier this month.

“I am completely satisfied with my performance today, although there were some little mistakes like in the short program yesterday,” Pogorilaya said. “I’m also extremely happy to go to the Grand Prix Final again. Honestly, I don’t even know when and where it takes place as I haven’t discussed it yet with my coach. Most of all, I’m happy to have skated well in both my Grand Prix events which allowed me to go further.”

Miyahara was ranked third in the short after an uncharacteristic fall on the triple Lutz. She had to switch her combination to the triple loop, but went for a double toe to be safe. There was a lot of pressure on the 2015 World silver medalist to deliver in the long. Her program to “The Planets” by Gustav Holst, was highlighted by a triple loop, double Axel-triple toe combination, as well as two more clean triples and excellent spins and footwork. However, again, she had a problem with underrotations and a toe, flip and Lutz were called underrotated. She finished second in the long and overall (198.00).

“Underrotations are what I have to work on the most,” said the reigning ISU Grand Prix Final silver medalist. “It is getting much better since last year, but today I felt some jumps were underrotated. It (the calls) is getting stricter, but if I practice hard enough, I can do much better jumps.”

Sotskova was especially strong in the short program and came close to Pogorilaya with a clean program to “Butterflies Are Free” by Alfred Schnittke. However, the World Junior silver medalist seemed a bit hesitant in her long program, also to Schnittke. While the opening triple Lutz-triple toe and triple flip were clean, she later underrotated a triple flip, triple Salchow and double Axel and the second Lutz was landed forward. Sotskova still had no trouble to hold on to third place (195.88) overall.

“Sometimes I have problems with underrotations in the competition, but in practice I never underrotate jumps,” Sotskova pointed out. Making the Grand Prix Final was a pleasant surprise for her. “I didn’t know until now (press conference) that I’ll go and I’m so happy about it. I will try to do my best at the Grand Prix Final.”

Wakaba Higuchi of Japan placed fourth (185.39). She completed a triple Lutz-triple toe, as well as three more triples in her routine to “Scheherazade.”

USA’s Mirai Nagasu was hammered once again for underrotations, and slipped from fourth to fifth (180.33). Teammate Karen Chen gave an energetic performance to “Tango Jalousie” and got credit for five triples. She placed sixth.