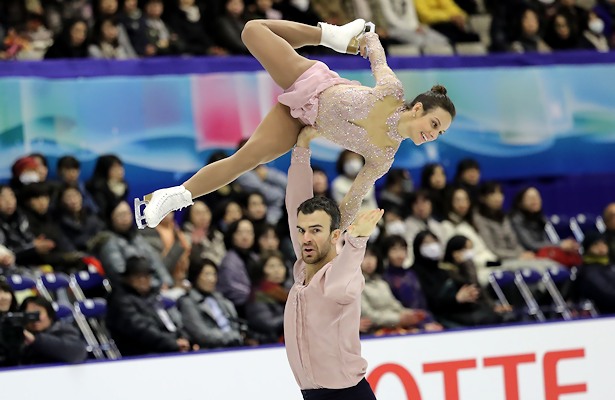 Duhamel and Radford did not skate their best on both days. They finished second in the short after Duhamel fell on the landing of the throw triple Axel and the side by side triple Lutz was somewhat shaky.

“It wasn’t our best performance, but it wasn’t our worst,” said Duhamel. “We’re trying a new throw for the first time this season. We only learned a throw single Axel this March, so it has been an interesting process.”

“We can do it,” she continued. “We did it very well in practice here, so that was disappointing, but I think the overall program was better than at our first Grand Prix, at Skate Canada. I think it was smoother and we did one of our better triple twists, so we’re happy about that. We’ll have to clean up some mistakes on the side by side jumps. Obviously, the throw and I had a little mishap in the footwork. That stuff will have to be cleaned up for the next competition.”

The long to “Non, je ne regrette rien” started off well with a triple twist, side by side triple Lutz (he two-footed) and throw quad Salchow. However, Radford then doubled the toe loop while Duhamel stumbled on a triple, and at the end, he struggled getting her up in the final lift, which still got a level two, but negative GOEs. It was still enough to overtake Peng and Jin, who also had make errors, to win with 204.56 points.

“For me, personally, I don’t know what happened, but at the end of the program my body got very tight,” said Radford. “My legs were very tired and we just mismatched the timing on that last lift and it was a bit of a struggle. But we have to make these mistakes throughout the season so that we can learn from them so that they don’t happen again.”

“When we got back from Skate Canada, we came up with a little game plan to try to work on the details of both programs, trying to increase that second mark,” Radford offered. “We were pretty happy with how Skate Canada went technically, so we wanted to carry that with us. We’ve been training very strong actually, the throw Axel, the jumps, the programs have been going really well, so it was a little disappointing that we didn’t get to show what we’ve been doing back at home.”

Peng and Jin had a rough start into their routine to “The Umbrellas of Cherbourg” when she fell on a downgraded double Axel as well as a triple toe. The Chinese team recovered to land a triple twist, throw triple Salchow and loop. Nevertheless, the Cup of China silver medalists collected their second silver medal (196.87) in what was their second international competition as a team.

“Today I made mistakes on the jumps and we did not show our level,” said Peng. “We are in second place, but not satisfied with the performance.”

“We didn’t think about going to the Grand Prix Final,” added Jin. “Our goal was just to show what we can do in training and to be satisfied with our performance. At these two (Grand Prix) events, the short program was very well-received by the judges which makes us very happy.”

Their short program to “My Drag” was truly a highlight, well performed and clean.

Wang and Wang struggled with the solo jumps as well in their program to “Love is a Many Splendored Thing.” She doubled the Salchow and underrotated the triple toe, but the throws were solid and the team from Beijing remained in third place (185.32).

“Overall, we are pleased with our program, although there were still errors and it was not perfect,” said Lei Wang, “but we know what we have to work on for the next competition.”

USA’s Tarah Kayne and Danny O’Shea turned in a good performance to “Song of India” and “Marche Slave” that included a side by side triple Salchow and throw triple Salchow to move up from fifth to fourth. In the short, they both crashed on the triple Salchow.

Germany’s Mari Vartmann and Ruben Blommaert missed the throw triple flip and the solo Salchow (she singled, he fell on a triple) and slipped to fifth (172.20). The Germans looked better in the short where they didn’t make any major mistakes, but had a few wobbles.