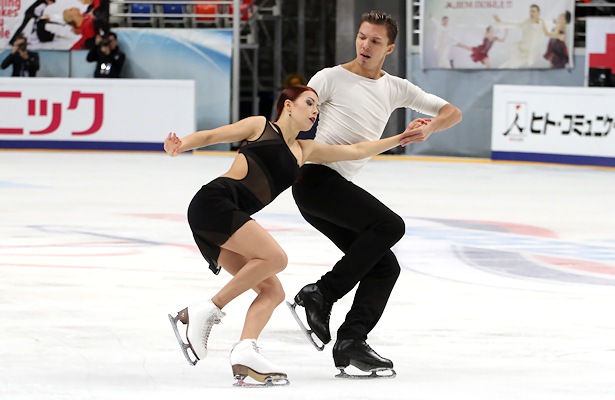 Russians Ekaterina Bobrova and Dmitri Soloviev maintained their chance for a spot on the Grand Prix Final after winning the Ice Dance event at 2016 Rostelecom Cup today. USA’s Madison Chock and Evan Bates took silver, while Kaitlyn Weaver and Andrew Poje of Canada started their season with a bronze medal.

Bobrova and Soloviev looked confident in their classical inspired free dance to “Prelude No. 20” by Frederic Chopin and “Four Seasons” in an arrangement by Nigel Kennedy. All elements were well done and garnered positive GOEs (Grades of Execution); all elements but the two step sequences were a level four. The 2013 European champions accumulated 186.68 points to take the victory over Chock and Bates.

Going into the free dance, overnight leaders Chock and Bates had a mere 0.12-point lead over Bobrova and Soloviev. Both teams had the same levels, however, Chock and Bates’ Blues “Bad to the Bone” and Hip Hop “Uptown Funk” looked fresher than the more conservative interpretation of “Mercy on Me” (Blues) and “Sing Sing Sing” (Swing) by the Russians.

The free dance of the Americans set to “Under Pressure” is also a very innovative program, however, Bates stumbled on the twizzles.

“I’m very disappointed to have made a such a big mistake in the twizzles in the free dance, which obviously cost us greatly in this competition,” he observed. “Reflecting on this, I think we’ll go home and we’ll pay more attention to that particular element that has been given me trouble this season. We’ll be better for it.”

Weaver and Poje had lost precious points on the twizzles in the short dance that were a level two, however, the Michael Jackson Hip Hop part to “Dangerous” and “Jam” was a lot of fun to watch – and to perform, as the skaters pointed out. The Canadians had changed their short dance earlier this season and decided not to do any senior B events in order to get their material ready for the Grand Prix. Their free dance to “Concierto de Aranjuez” was right up their alley as well, a passionate, emotional dance.

“This program really speaks to us, not only with the music, but with the theme and the story,” said Weaver. “We’re so happy to go into a story and a program that we feel is representative of our skating, our style. With our new location, new coach (Nikolai Morozov), and so many new things, we feel very happy that we could perform under pressure today.”

Charlene Guignard and Marco Fabbri of Italy came in fourth with a well-skated dance to The Nutcracker, while Tiffany Zahorski and Jonathan Guerreiro of Russia had a few wobbles and bobbles and finished fifth.