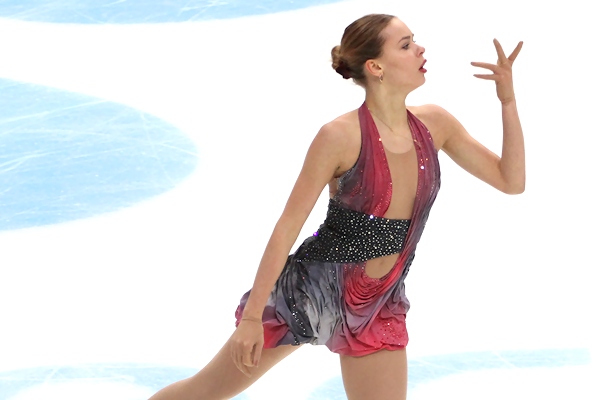 Anna Pogorilaya of Russia easily dominated the Ladies’ event at the 2016 Rostelecom Cup in Moscow, Russia, while teammate Elena Radionova claimed the silver. However, the Russian ladies failed to repeat the podium sweep they celebrated last year with Radionova, Evgenia Medvedeva and Adelina Sotnikova.

Pogorilaya led after the short with a clean and strong Tango performance to music from Scent of a Woman, not only nailing her jumps and spins, but also showing off expression and elegance. In her dramatic free program to the Modigliani Suite and Memorial, the Muscovite once again was flawless, landing seven triples (including a triple Lutz-triple toe and triple Lutz-singe loop-triple Salchow combo) and overall looked confident and smooth.

The World bronze medalist obviously was satisfied with her performance and her excellent score of 215.21 points. Nevertheless, her focus has already shifted to her next event, NHK Trophy.

“I have to start from scratch, for each competition,” said the 2016 Russian bronze medalist. “This competition is done. I have to prepare and get ready for my next one.”

Radionova, who had been taken ill in September and missed some practice time, was not in peak form yet, but she did enough to win the silver in Moscow with 195.60 points. The European silver medalist was second in the short to Porgy and Bess, where she had two-footed the double Axel.

In her “Turandot” long program, the Moscow teen showed strong nerves. When her opening triple Lutz was a bit shaky, she just tacked a triple toe to the next jump, a triple flip, for a combination. The loop was not Radionova’s friend today; she fell on one and two-footed another one. Overall the 2015 World bronze medalist looked a bit slow, probably the result of missed training time.

“I can’t say that I’m satisfied with my program,” said the 17-year-old. “There was that regretful fall and some other small errors, but this was my first Grand Prix of the season. Last year, my coach (Inna Goncharenko) couldn’t come.”

“This time I had to deal with unforeseen circumstances, but in the end, it is all an experience,” the two-time European silver medalist added, referring to Lipnitskaia, who stopped during her program as she was injured. “I was warming up and I realized that something was not right with Julia, but I tried not to pay attention to it. I just did not know how long I would have to wait (for the competition to continue).”

Hicks came from sixth place following the short. The Californian turned in a solid performance to The Hunchback of Notre Dame, with six triples, but no triple-triple combination. The short was clean as well, with a triple flip-triple toe, but the component score was not so high; apparently the judges didn’t appreciate her interpretation of Maleficient so much.

The 20-year-old racked up 182.98 points and won the second Grand Prix medal of her career after the silver from NHK Trophy a year ago.

“I’ve always been drawn to the darker characters and its more powerful music,” Hicks shared when asked why she picks rather dark themes for her programs. “I always just enjoy portraying it. I feel like it’s more fun for me to skate it and to try to perform to this music. I feel the darker, more powerful characters really play to my strength like the jumping and the speed.”

Zijun Li of China overall was solid and just underrotated two jumps in the free to finish fourth at 181.83 points. Kazakhstan’s Elizabet Tursynbaeva fell on the double Axel in the short and had few bobbles in the free to place fifth (181.32 points).

Lipnitskaia came out strong in the short set to “Autumn Leaves,” with an easy looking triple toe-triple toe combo. She also started well into her long program with her opening three jumps, but then she apparently felt pain in her leg, didn’t do the Axel, seemed to almost forget her program. The 2014 European champion continued, singled a Lutz and finally stopped and was limping.

After a short conversation with her coach, Lipnitskaia went to the referee who told her that she has three minutes to resume her program. Eventually she was ready to go, and even went for a double Axel but fell. Overall, the skater left out three elements and received a five-point deduction for the interruption so that she went all the way down from third to 12th and last place.

“We now need to find out what happened,” said coach Alexei Urmanov. “Obviously there is a health problem. To put it short, her leg became numb.”

He added that the skater was fine after the short, but felt something was wrong in the warm up. However, the problem did not seem too serious and so they did not think about withdrawing.