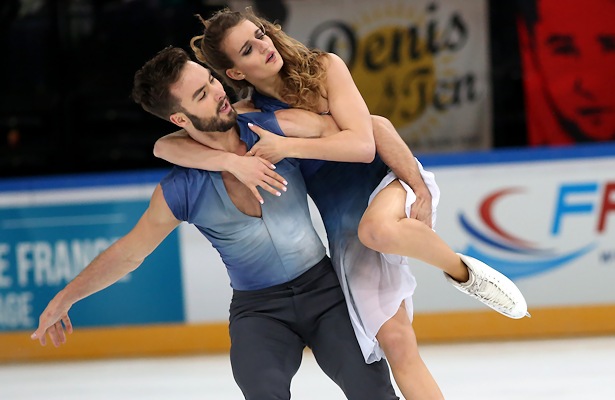 Papadakis and Cizeron already had a strong lead from their short dance to Blues and Swing – a personal best of 78.26. The free dance to “Stillness,” “Oddudua,” and “Happiness Does Not Wait” was equally very smooth, and the difficult elements seemed effortless. The European champions collected excellent levels for their elements and totaled 193.50 points to take their third Grand Prix gold.

“It was a hard summer, because the program took long to make,” Papadakis explained. “It was hard to make a decision about the program, but we’re happy the program is what it is today and we’re very happy about the performance.”

The gold medal was a nice little extra birthday present for Cizeron, who turned 22 years old the day of the free dance.

“I didn’t really realize it was my birthday,” he said, “only when people started singing after our performance! It was a very good performance. We were anxious to see what the reaction to our program would be. We’re happy that the audience got into the program.”

After silver at Skate America, Hubbell and Donohue knew they’d probably need at least another silver to qualify for the Grand Prix Final. In the short dance, Hubbell was a bit shaky and the Americans stood in third place. However, their free dance, a love story to “I Wanna Dance With Somebody,” “Can’t Help Falling in Love,” and “Earned It” was very well-skated and allowed them to move up to second place overall (174.58).

“It’s already our fourth competition this season,” Hubbell pointed out. “The beginning of the season was a bit rough. We lost some levels in competition and we didn’t really come out of the gate as strong as we wanted, but we’ve spent so much time and effort at home, I think we’ve worked the best we’ve ever worked in the last two or three weeks.”

“We really feel the momentum and we hope we’ve done what we can now to make the Final for the second year in a row, which is a huge accomplishment,” she added. “It was our goal for the Grand Prix season. I think we’re just excited to go home and just continue this progress.”

Gilles and Poirier were ranked fourth in the short dance as she stumbled on a twizzle, but the Canadians came back strong (170.78) with their characteristic Argentine Tango “La Buena Onda.”

Two bronze medals might not be enough for the Final, however.

“We may not reach the Final, but we’ve been in this situation before and we’ve come back stronger,” said Gilles. “We’re motivated to go home and work out some kinks. We’re very proud of what we did today. We didn’t let the big mistake that I did yesterday defeat us. We know that we have two solid programs this season. Unfortunately, we didn’t do both solid this week. We know we have things to work on.”

Elena Ilinykh and Ruslan Zhiganshin of Russia danced an upbeat Bollywood program, but Ilinykh fell on a transition. The two step sequences were rated a level two and the team received a deduction for an extended lift. As a result, the Russians dropped from second to fourth (167.40).

Israel’s Isabella Tobias and Ilia Tkachenko (158.86) produced a smooth dance to Tchaikovski’s Nutcracker, but the footwork merited only a level two and one. Marie-Jade Lauriault and Romain Le Gac of France had a solid debut on the senior Grand Prix and finished sixth (150.07).