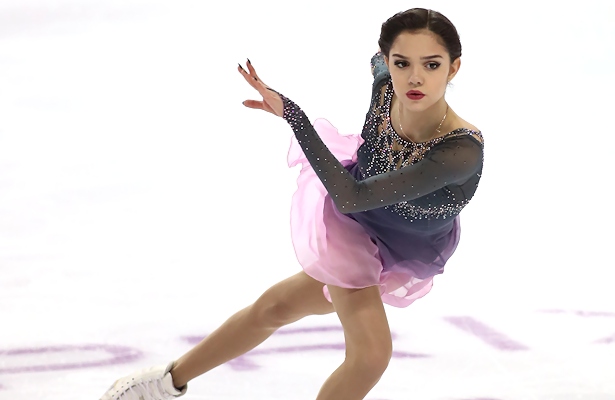 Despite a shaky start in her routine, overnight leader Evgenia Medvedeva of Russia was able to defend (227.66) her title at the 2016-17 ISU Grand Prix Final. Japan’s Satoko Miyahara finished second (218.33) while Anna Pogorilaya of Russia won the bronze (216.47).

Medvedeva, who was the last one to skate in the long program, made a mistake on her first jumping pass, a triple flip, which was supposed to be a triple-triple combination. However, the 17-year-old recovered to land six more triple jumps, including an improvised triple flip-triple toe loop combination, in the second half of the program.

“I expected more from myself,” said the 2016 World champion. “I wanted to do more and I could have done more. The mistake was hard to overlook. It happened to me for the first time that I missed that first jump and the combination, but there is always a back-up plan. I had to move the combination to the second half and I did it well, so I’m happy about that.”

“The Grand Prix Final is the most important competition of the season, because it is the only one that has the juniors and the seniors and only the best skaters,” added the Russian. “I am proud to have qualified for my fourth Grand Prix Final, twice as a junior and now twice as a senior. Here, [there] are a lot of talented people you can learn from.”

Miyahara also produced six clean triples, including a double Axel – triple toe loop combination in the second half, but her triple flip was called underrotated by the technical panel. The 2016 Four Continents champion was smooth and fluid in her performance to “The Planets” by Gustav Holst, but lacked power compared to some of the other competitors.

“I am very happy today,” said the student of Mie Hamada and Yamato Tamura. “The flip was not my best, but that was the only not so good part of my program. I am happy, but I still can do more and better. My feeling was getting higher and higher towards the end of my program.”

Pogorilaya received a new personal best for her powerful and emotional performance to “Modigliani Suite,” “Le Di a la Caza Alcance” and “Memorial Requiem.” The student of Anna Tsareva landed seven clean triples, but the take off edge on her flip was called “uncertain.”

“I’m so grateful to everyone that cheered for me and lived it with me,” said the 2016 Worlds bronze medalist. “My whole team has really supported me. I’m really pleased, but the skate was still far from perfect. If I look at the performance as a whole, then it was great. Of course I am insanely happy, but there were still a few mistakes.”

In the short program, the European bronze medalist had an unfortunate stumble when she was getting ready to start, and it looked like it had affected her performance, but the skater claims that she was alright.

“My entrance onto the ice was pretty funny. If anyone in the audience was bored, I definitely woke them up!” she joked. “I slid and hurt my back a bit, but I was just being careful with it. I´m an athlete and skating is my life. What is sport without injuries? I am fine though, there is no problem and nothing to worry about.”

Canada’s Kaetlyn Osmond, who stood second after an energetic and engaging performance to a medley of French songs in the short program, slipped to fourth place overall after an uneven performance to La Boheme. The 21-year-old started strong with a clean triple flip – triple toe loop combination, but fizzled out towards the end when she doubled a planned triple Salchow.

“I went out there and had a couple of things in mind that I wanted to do and I did them,” explained the two-time Canadian national champion. “Of course it wasn’t perfect. I wasn’t completely comfortable in the whole program. I didn’t feel fully in the ice and I made some silly mistakes which I don’t usually make. But to do the loop, which I don’t usually land, put the cherry on top of a great skate and then to be able to get a season’s best and sell the program at the end, great. I got to the end of the program and was like, ‘why is it over?’ Now I just need to improve. I can do everything separately so easily. I just need to be able to put it together.”

Russia’s Maria Sotskova, who debuted at the Senior Grand Prix series this season, delivered two strong routines to the music of Alfred Schnitke, but the technical panel called some of her jumps underrotated (198.79).

“This was my little Olympics and I feel like I won it today,” said the student of Elena Buyanova after the long program. “I wasn’t even nervous, really. I loved it, my coach loved it, and I hope everyone watching loved it too. I came here just to show clean skating and to show the judges I can compete for the top places and the top marks.”

Teammate Elena Radionova made mistakes in both programs to finish sixth overall with 188.81 points. The Russian fell on her opening triple Lutz and tried to turn the second triple Lutz attempt into a triple-triple combination, but the second jump was called underrotated. The technical panel also downgraded her triple Salchow attempt in triple loop – half-loop – triple Salchow sequence. The student of Elena Goncharenko skated a rather traditional long program to Turandot, but opted to do a more upbeat jazzy routine in the short, which was choreographed by Shae-Lynn Bourne and stretches the skater’s range.

“I’m OK (after the fall on the triple Lutz),” said the 2015 World bronze medalist after the long. “These things happen. It’s not ideal to fall on the first jump. I don’t really know why it happened. I rarely skate first after the warm-up, so maybe that explains the problems I had. I don’t know. Of course it’s a shame. I’ve grown a lot and that’s created some problems.”