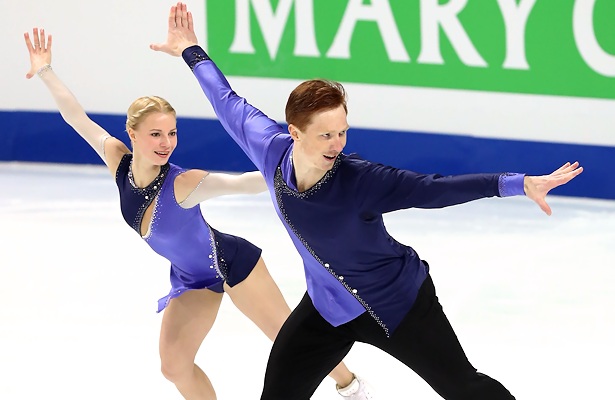 Russia’s Evgenia Tarasova and Vladimir Morozov achieved the first major victory of their career, finishing first in Marseille, France, ahead of the new Chinese team Xiaoyu Yu and Hao Zhang, as well as World champions Meagan Duhamel and Eric Radford of Canada.

The students of Nina Mozer, Andrei Hekalo and Robin Szolkowy were flawless in the short program set to “Glam” by Dimie Cat, but made mistakes on both jumping passes in the long. Still the skaters count the performance in the long as a success.

“We were in a similar situation like at Skate America – leading with quite some advantage in points,” explained Tarasova. “But with the experience from there, we knew that we had to refocus completely. Today was a complete new day for us.”

The team opened the performance to the music by John Miles with a strong level three quad twist and nailed two strong triple throws to earn 213.85 points in total, updating their personal bests in all three categories.

“We’ve had two weeks of good preparation and worked very hard and this is the result,” added Tarasova. “This victory is a big step forward for us. The judges now look at us as potential winners and that is important.”

Yu and Zhang also skated a clean short program, but made mistakes in the long, missing the first triple toe and the final spin, which received zero points. The team picked up 206.71 points, their new personal best.

“Today I feel very happy because we have worked together for only half a year,” said Zhang. “I’m very pleased that we have first place and second place in the Grand Prix events and very pleased that we can compete in the Final and we got second place. The place is good, but there were some problems in the program, such as the solo jump and the spin, so we will continue to work on them.”

Despite being in a new partnership and having skated together for such a limited time, the team already shows a lot of potential to develop into strong lyrical skaters.

“We are very excited to be on the podium,” said Yu. “Today I felt very tired in the lifts and in the jumps, but I fought through it and we did pretty well. We are very happy to have been skating this great.”

Duhamel and Radford struggled with both their programs and had to settle for the bronze medal, despite having the highest base values in the field. Duhamel stumbled out of a triple Lutz landing and fell on throw triple Axel in the short. In the long, they missed both jumping passes and had a shaky landing to the throw quad Salchow.

“We had a back-up plan in case the side-by-side triple Lutz didn’t work and I had half a mind to tell Eric to go for the throw Lutz,” said Duhamel after the short program. “But we haven’t missed the Axel since we’ve been here and I just thought ‘I feel good let’s do it.’ I’m kicking myself now for not calling the Lutz. At home, the triple Axel is a way more consistent throw. It wasn’t a one percent chance, it was a 95 percent chance, but there you go.”

“It wasn’t the way I wanted to have my birthday go,” she added.

The team, who has opted to do the hardest triple throw, believes that they might reconsider their strategy.

“We’re trying some really difficult elements,” pointed out Radford. “It’s frustrating because they were really good in practice, but they’re not transferring into the performance, and today they weren’t even close. We’re going to have to take a look after this competition. It’s a high risk program and there’s not a high reward.”

The two-time World champions were disappointed with their performance, even though overall the long program looked rather solid and they earned 205.99 in total.

“We were prepared to come to this competition and have two great programs, and unfortunately we couldn’t have one great program, so we have to reassess a lot of things,” said Duhamel. “We struggled in the Grand Prix circuit, and we struggled here. We can’t continue this season like this. We have to make a U-turn now as we prepare for the second half of this season so that we can show the best of our skating and be happy and proud of ourselves when we get off the ice. This is always our main objective and unfortunately, this week we didn’t have these feelings.”

She was at loss to explain the mistakes, though. “Sometimes you come to a competition and you don’t feel comfortable. At NHK, we didn’t feel completely comfortable, so when we didn’t skate our best, it was not a complete surprise. But coming here, we felt very comfortable, we liked the ice, we were well rested and well prepared. It is disappointing that there’s nothing specific.”

Russia’s Natalia Zabiiako and Alexander Enbert, who replaced Aljona Savchenko and Bruno Massot in the Final, finished fourth with 188.32 points. The students of Nina Mozer had a shaky landing on the throw triple loop in the short program set to “Romance” from Sviridov’s Snowstorm and only did a double Salchow as a side-by-side jump in the long and throw double Axel in the long to “Cry Me a River.”

“We’re just so happy that we had the opportunity to compete at the Final,” said Zabiiako. “Especially after I was injured in August. We were very worried because it was so close to the start of the Grand Prix, but we made it and we are very happy.”

“The other program wasn’t exactly our personality,” said Seguin. “I think this program is more us. We know that we could go through many good performances with that program and we couldn’t do it at Worlds last year, so it was a good opportunity for us to go back to this program.”

“It’s kind of a weird feeling that we still enjoyed the program so much even with the mistakes we made,” added Bliodeau. “It was so energizing with the crowd and the relation we have in this program, but the elements were not there today.”

The Canadian silver medalists missed both the jump and the throw in the short, but had a better performance in the long, where they missed only the opening triple toe loop.

“We definitely enjoyed this program more than yesterday. We had a much better performance, even though we still made some mistakes,” said Bilodeau. “After yesterday, we didn’t really care about the score anymore – we just wanted to skate better. Overall, we’ve had an up-and-down season. Sometimes we’d do a perfect side-by-side triple, next time we’d miss it again. We won Skate America, that was an up, then Cup of Russia was a down. This season the mental side was difficult, but I think we’ve passed through it.”

China’s Cheng Peng and Yang Jin finished sixth with 183.19 points after a disappointing long program in which they missed both jumping passes and a lift. However, just like their teammates, they also looked very promising, especially in their quirky short program.