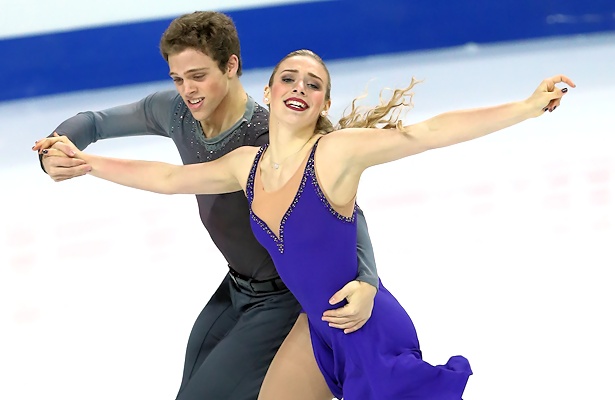 The first medal of the 2016-17 ISU Junior Grand Prix Final was awarded on Friday in the Junior Ice Dance category. Out of six competitors, three couples were the debutants of this prestigious event, whereas the other three teams are recognized leaders and split all medals of the last season Grand Prix Final and ISU World Junior Championships between them. The same three teams stood on the podium in Marseille.

This event represents a breakthrough for USA’s Rachel Parsons and Michael Parsons. The students of Alexei Kilyakov, Elena Novak and Dmitry Ilin have won many medals in the last two seasons, but always finished behind the their perennial rivals and training mates Lorraine McNamara and Quinn Carpenter.

In France, they stood second after the short dance competition, but delivered the most technically sound free dance of the night. Both step sequences were rated level three and all other elements received level four to win the event with 162.50 points in total almost matching their personal best of 162.76 points.

In addition to technical proficiency, both their free dances stood out due to excellent flow, strong basic skating skills and creative choreography which maintained a single unifying team throughout the entire dance, making required elements and connecting moves into one whole.

Skating last, the three-time U.S. national junior medalists were not certain of their placements until the marks come up.

“We put out a solid skate, but there were still some little mistakes, so I didn’t know if it was good enough,” explained Rachel. “We were really just trying to live through the program and not focus on the technical elements and just tell the story. We didn’t come into this competition with placement goals, we were just competing against ourselves.”

In contrast, overnight leaders Alla Loboda and Pavel Drozd of Russia, who won silver at the last two Junior Grand Prix Finals, had a goal in mind. After the short dance, Drozd told the press that “this time we came to win. After winning silver twice, it is now time for us to get on the top of the podium, in our last Junior Final.”

The students of Ksenia Rumiantsev and Elena Volobueva seemed to be well on the way to achieving this goal with a strong performance to Ernest Lecuona’s “Malaguena,” however, two almost unperceivable, but costly mishaps in the last minute of their dance forced them to settle for the third silver in a row. Their straightline step sequence received level three and the final step sequence was graded only level two, putting them two full points behind the Americans in the basic value of the program for a total of 161.87 points. This score completely matches their personal best from a Junior Grand Prix event in Saransk earlier this year.

The 2016 Russian junior national champions believe that they might have been too carried away with the performance.

“Today we skated with all our emotions,” said Drozd. “We were skating in the moment and maybe that affected the timing slightly, but we skated together and for each other today. The lift that got a level 3 never was in question before and always was a level 4 and that made the difference.”

Loboda agrees with her partner’s assessment. “I think today we skated better than in other competitions, [with] more speed and more emotions,” she said. “We are so thankful for each other and for our wonderful coaches.”

The defending Junior Grand Prix Final champions, McNamara and Carpenter, finished third with 153.47 points, well below their personal best of 163.65. The team struggled with some elements and got three of them called level two: one of the pattern dance sequences in the short dance and both step sequences in the free.

The World Junior champions said they cannot comment on the levels at the moment.

“I don’t feel qualified to give an accurate comment on the marks as I haven’t watched it back yet,” said Carpenter in the mixed zone. He did defend the shaky lift in the short, however. “There was nothing wrong with the lift itself. There was a mishap getting into it, which meant resetting afterward, but the element itself was fine.”

Still, despite technical mistakes, both their dances were strong and different in style from the programs they performed last year. This was one of their goals for the season.

“Our intention is to not make it a clear cut step up, but a smooth transition, and so we’re using this year as our bridge between juniors and seniors,” said Carpenter after the short dance.

Despite failing to match their best results, the two-time U.S. National junior champions were not disappointed.

“For us it’s always been more about the performance than the medals so, regardless of where we come, we’re happy,” said Carpenter.

“This competition’s been really great, really fun. It’s the final so unlike the other competitions it’s not about qualifying, we can just come and enjoy the skate,” agreed McNamara.

Three debutants were unable to challenge the leaders.

USA’s Christina Carreira and Anthony Ponomarenko delivered two versatile programs: sensual blues on Thursday and a melancholic free dance to “Exogenesis Symphony 3” by Muse on Friday. The students of Igor Shpilband said that their main goal was to gain experience.

“It’s our first [Junior Grand Prix] final and so we want to show that we deserve to be here,” said Ponomarenko after the short dance. “It’s a different atmosphere because all the senior skaters – skating royalty – are here and we want to learn from them.”

After the free dance his partner agreed with him: “It’s the coolest experience ever. This is our first big competition and it will really help us going into nationals and Junior Worlds.”

One of two French teams in the combined Final, Angelika Abachkina and Louis Thauron, who delivered very expressive dances on both days of the competition, remained fifth with 146.12 points.

“It’s one of the few events my parents can come to because it’s in France,” said Thauron. “This is a big support for me. Here, the atmosphere is similar as during our first JGP in St. Gervais. It is very supportive.”

Russians Anastasia Shpilveaya and Grigory Smirnov, who opened the free dance with an upbeat and energetic performance to Italian folk songs, finished sixth with 140.64 points.

“We earned ten points fewer than our best, so now we just need to keep on working like always,” said Shpilevaya. “We need to work on our technical. We got level two on a couple of things like our step sequence, so we just need to tidy everything up.”

They also enjoyed the support of their parents at the event.