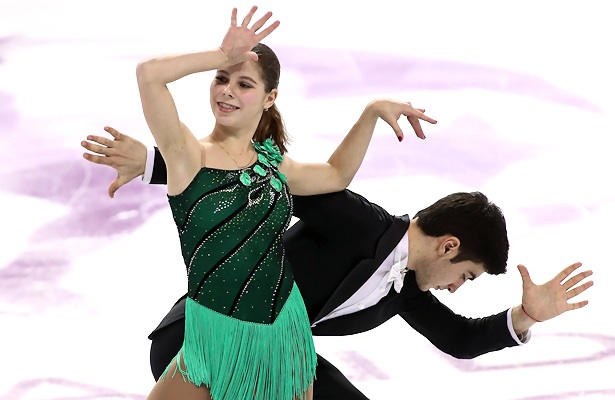 Russia’s Anastasia Mishina and Vladislav Mirzoev were strong on both nights of the 2016-17 ISU Junior Grand Prix Final, winning the title with 180.63 points. Anna Duskova and Martin Bidar of the Czech Republic finished second with 167.76 points, while Russia’s Aleksandra Boikova and Dmitrii Kozlovskii captured the bronze (159.72).

Mishina and Mirzoev’s performance to “Attention Mesdames et Messieurs” and “La vie en rose” was technically solid and entertaining throughout, and the students of Nikolay Velikov and Ludmila Velikova were greeted with a standing ovation at the end of the routine. Their long program featured two side by side triple jumps, including a ‘tano’ triple Salchow (which was called underrotated by the panel), two clean triple throws, and a level three triple twist.

The 2016 World Junior silver medalists were very happy with the results.

“It was difficult at the beginning of this competition because I was a little ill, but we overcame it and we’re very pleased,” said Mirzoev. “We were nervous before the skate, but no more than in other competitions.”

The team kept last season’s program which was very well received by the French public.

“Yes, we noticed that they started singing right away,” said Mirzoev. “It worked out well that we kept last year’s program. It suited this competition perfectly. It gives us energy when the audience is so supportive.”

“This victory will give us confidence,” added Mishina.

Skating to “La leyenda del beso” and “Historia de un amor,” Duskova and Bidar appeared to be the most mature team in the field, but a fall on a throw Salchow prevented them from challenging for gold. Still, the overall impression was strong and among six competitors, they looked the most ready to move up to the senior level. It was, apparently, one of their goals for the season.

“Last season, we worked on the technical scores, and this season, we’re working on the components,” explained the students of Eva Horklova, Richard Gauthier and Bruno Marcotte after the short program. “They’re important for going on to senior competitions, because senior pairs have more experience.”

The 2016 World Junior champions were quite satisfied with their performance overall.

“It’s the kind of mistake I’m most afraid of,” said Duskova of the throw Salchow. “The jump is done and you land it and the next moment you’re on your butt. But our combination, the triple Salchow-double toeloop-double toeloop, worked really well, and we’ve been fighting for this combination the whole season.”

“It was good, but we can do better,” added Bidar, “but then, you can always do better. It’s great to be here with all the great senior skaters, too.”

Boikova and Kozlovskii pulled up one spot with a slightly flawed performance to “Justification of Life” by Richard Kaufman. The students of Artur Minchuk stepped out of the throw triple Salchow and ran into problems with both spins at the end of the program. The team from St. Petersburg appear to be natural performers. During warm ups and trainings, they hardly stand out of the crowd, but during competition, they really attack and sell their programs.

“The mistake (on the throw) was not a mistake in technique,” explained Boikova. “It was just unlucky.”

“We were ready psychologically and physically for this competition,” said Kozlovskii. “In a week we have our national championships, so we need to keep working and make sure we can compete with the seniors. It will be our first time competing against the senior skaters.”

Teammates Alina Ustimkina and Nikita Volodin, who stood in third after the short, slipped to fourth place overall with 158.14 points after they missed both jumping passes.

“We lost a lot of marks on my mistakes on the jumps,” admitted Ustimkina. “Our twist was a level two, not three as it usually is, and we lost points on the spins.”

“I´ve had a problem with the (side by side) jumps for a long time,” she added. “I haven’t been managing them in practice or in competition since the summer. Overall, I have loved being here at the Final. It is the first time we have been here and everyone has given us such a warm welcome and great support.”

Australia’s Ekaterina Alexandrovskaya/Harley Windsor and Russia’s Amina Atakhanova/Ilia Spiridonov had quite unfortunate outings. The Australian team skated through their opening element—a twist—and then missed both throws, one of the jumps, and a spin.

“It was obviously not our greatest skate,” said Windsor. “Physically we felt fine, but it just didn’t happen on the night. We’ve had a big season, but everything here has been very last minute and I don’t want to say jet lag as an excuse, but we are pretty tired and not as focused as we should have been. The timing was off during the twist.”

Atakhanova and Spiridonov fell at the first lift and missed the second one, as well as the side by side triple Salchow and throw triple Salchow.

“Amina hurt her back when we fell during the lift,” explained Spiridonov. “That was obvious in the second half of the program. I really don’t know what to say. We just have to keep working hard and work towards nationals where we will try to show what we’re worth.”