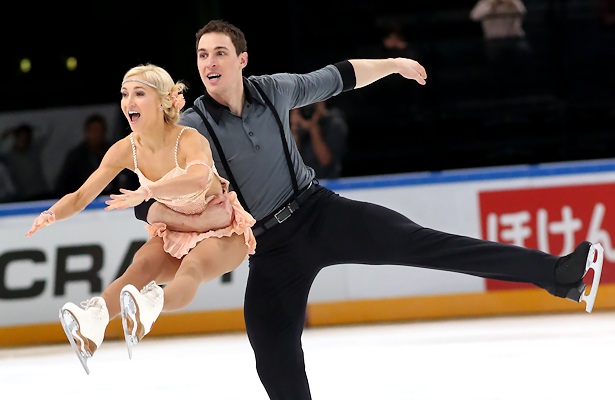 When German pair skater Aljona Savchenko twisted her ankle badly on a botched landing of the throw triple Axel in the free skating at Trophee de France in Paris last November, she knew immediately that she was injured. Although the ankle hurt like hell, she finished the program.

The five-time World Champion, along with partner Bruno Massot, won their second Grand Prix event and qualified for the 2016-17 ISU Grand Prix of Figure Skating Final, but they had to withdraw. Savchenko had suffered a ligament tear in her right ankle and the recovery took longer than she had expected.

“For one week (after the accident), I rested,” the Ukrainian-born pair skater explained. “Then I got on to the ice and could stand only on one foot, but at least we did lifts. Then, the second and third week it got slowly better. I was able to move the second foot.”

Just before German Nationals in mid-December, Savchenko began doing spins and footwork again. At nationals in Berlin, where the team took part non-competitively, she did her first triple jump in practice since the injury. They skated their programs with double jumps and omitted the twist and throws.

They added the twist by end of December, and last week, the 32-year-old started with double throws.

“I never had an injury that took me out that long,” she said. “The doctors are telling me that this is normal for this kind of injury. Luckily, the ligaments were not completely ruptured, but it takes eight to twelve weeks to heal. There is still some swelling and I need to tape the foot well. I’m doing a lot of physiotherapy and exercises, but nobody can do magic.”

It is not an easy situation for Massot, 27, either.

“It is tough, especially for Aljona of course, but I wait for her and I am there for her,” he said. “We are training as usual. The preparation was not the best considering that the injury has slowed us down, but we have a lot of things to work on anyway. I worked a lot on my jumps, my artistic side and interpretation. We did a huge amount of lifts. Aljona’s jumps are back, but we needed more time for the throws.”

Nevertheless, the 2016 World bronze medalists are determined to go to the 2017 ISU European Figure Skating Championships that will take place the last week of January in Ostrava, Czech Republic. They are considering scaling down the degree of difficulty of their programs which usually include a throw triple Axel and throw quad Salchow, however.

“We just started doing throws,” Savchenko pointed out. “We will see how it goes and then we’ll make a decision. There is always a risk of injury, but you have this with everything.”

“We plan to come to Ostrava,” Massot confirmed, while stressing that they were only simplifying the throw jumps. “Aljona is getting better and our motivation is that we want to be there despite the injury. We’ll make the programs easier for sure in order to preserve Aljona’s ankle, and most of all, not make things worse.”

The European silver medalists have changed a bit of the layout of their long program to “Lighthouse” by Patrick Watson. Instead of a sequence of two triple Salchows, they are now doing a triple toe-triple toe sequence and the throw Salchow (triple or quad, depending on the situation), is not the last element anymore.

“We changed before German Nationals and we’ll leave it like that for now and we’ll see how it goes in competition,” Savchenko said.

With her experience and knowledge, the pair skater is confident to get all elements back fast once she is fully healthy.

“You know that you can do everything,” Savchenko said. “Even though I didn’t do any triples for five weeks, I could do them right away. Ten years ago, I couldn’t have done that. Eventually we will bring back the throw triple Axel and throw quad Salchow. We were able to do it in practice and we have analyzed a lot and we’ll train them in a way that they will be better than before.”

After German Nationals, the team performed in five shows around Christmas and New Year, obviously without throws and triple jumps, but it was still good practice, felt Massot: “The shows at the end of the year allowed us to stay in competition atmosphere. Even though it is a show, we did our short program and kept in shape. We skated really well.”

In early 2017, Savchenko and her husband, Liam Cross, moved to a new apartment in the mountain village of Oberstdorf, where the skaters live and train. They are coached by Alexander König and Jean-Francois Ballester.

“Moving is always stressful and there is a lot to do, but I’m lucky to have a great husband,” Savchenko said. “I still have to do something, but it distracts me a bit and the apartment is beautiful. Finally, I have room for all my things and we have a great view. That gives me more energy.”

Despite the injury, the skaters are looking forward to Europeans. “Even with the injury, we want to be present to show ourselves and what we can do in spite of that big problem,” Massot pointed out.