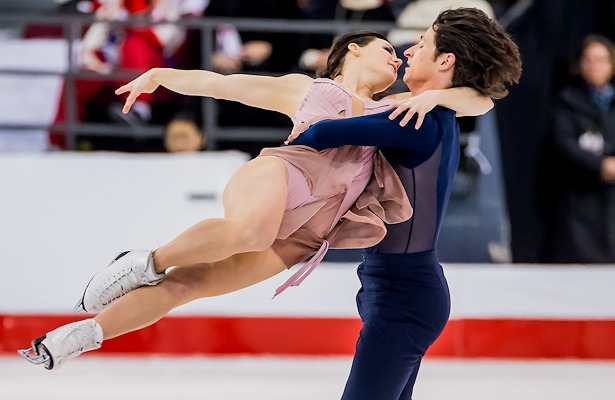 2010 Olympic Champions Tessa Virtue and Scott Moir continued their steam-roller return to competition at the 2017 Canadian Tire National Skating Championships in Ottawa, Ontario, smashing records like a wrecking ball and resuming their position atop of the ice dance rankings.

They performed their soulful “Pilgrims on a Long Journey” free dance with character and charisma punctuated by the rotational lift and intimate closing choreographic dance lift. Even the team’s pause at center ice midway through the routine as the Sam Smith lyrics commenced seemed sublime and engaged the audience at TD Place. Five of the elements of the dance were graded a level four and earned the team 118.79 with many perfect ten component scores. They completed the competition with a record score of 203.15.

“We are so excited to see where we can take this,” said Virtue of the record ice dance score and season’s remaining competitions.

“It’s a really, really tough field,” added Moir of the competition. “I think a fresh perspective gives us an idea of how important this is. To accomplish what we were able to this week, we are very proud of ourselves. It was a world class event out there.”

Dressed in new costumes, the team opened with a picturesque stationary lift with Weaver appearing to float perpendicular to Poje’s leg. The team’s highlights continued with a dramatic straight line lift at the change of the music and a stunning low choreographic dance lift. Their only arguable concern was slightly cautious, but nevertheless synchronized and measured twizzles. The emotive skate earned the team six level four elements and 113.81 points for a competition total of 192.73.

“It’s a chance to slow down and milk every moment and enjoy it,” said Weaver of the captivating program.

“We wanted to just go out there and let it all out and just really enjoy the performance and enjoy the atmosphere, and we felt like we did that today,” said Poje.

“One thing we are learning in our skating right now is to let go,” said Weaver referring to the team’s coaching change; now training with Nikolai Morozov in New Jersey. “Today, our goal was to just let it go, let our hearts open up, send it out to the universe, and let the rest take care of itself. This feels like a perfect jumping-off point into the second half. This was exactly the confidence booster we need going into this part of the season.”

The boundary-pushing team of Piper Gilles and Paul Poirier hungrily skated their Argentine Tango free dance with passion and panache to claim the bronze medal. Highlighted by a dramatic face-to-face straight line lift, the free dance earned the team 111.53 points for a total competition score of 189.68.

“It was shaky,” said Poirier of the skate that featured only three level four elements. “A lot of small errors, nothing super serious and that’s not fixable, but definitely not our best skate of the season or comparable to what we have been doing in practice. In a way a little but disappointing. We have to treat this competition as a stepping stone for the international championships coming up. Definitely we will go home and regroup and do some reanalyzing to make sure everything is cemented.”

In the short dance, Virtue and Moir kick started their “Prince” routine with a dynamic midline step sequence followed up by a sultry midnight blues dance pattern showcasing their versatility. Though the twizzles were slightly slow and labored, which reflected in the GOE scores, they received level four grading on each of the five required elements and earned a short dance score of 84.36.

“It was a solid skate for us, fairly similar to how we’ve been training it,” said Virtue. “We did a lot of work in preparation for this event trying to manage our energy and that is big at a Canadian championships, because the crowd is electric. We always love performing in front of a Canadian audience and there is something particularly special about the national championships. We’re so excited to be back, so a lot of our work this week is maintaining our composure and staying in control every step, which I felt we did.”

Weaver and Poje struggled throughout their short dance routine with misbalances by both team members. The most obvious gaffe was Poje’s stumble at the conclusion of their midline step sequence. Highlights included their sharp movements and an impressive lift in which Poje log rolls Weaver up his back. They still managed level four grading on each element and a personal best score of 78.92, but were noticeably disappointed with the performance.

“We felt so good and so prepared, but it’s just maybe a matter of attacking it too much, so that threw off the balance a little bit,” Weaver said.

“We had little things here and there, but we really felt like we tried to bring in the audience and we really had fun out there,” Poje added.

Gilles and Poirier had their own obstacles in the short dance given Gilles spent most of the day prior nursing a stomach virus. Feeling better and putting mind over matter, the team executed their disco routine with commitment highlighted by the dazzling partial step sequence and innovative twizzle positions. Relieved at the feat, Gilles gave Poirier an exuberant high five at the conclusion of the program. The team earned all level fours apart from a level three for the midline step sequence, and a total score of 78.15.

“As an athlete we train so many days of the year when we don’t feel like one hundred percent, so I think this is training,” Gilles said of the comeback. “I let my body do what it’s told. We did what we can do.”